We were passed this morning by narrowboat 4evermore – Barry had spent some time chatting with Kevin from that fabulous boat while we were on the Llangollen canal. He and his wife bought their boat and are travelling around England after he spent years working on the oil rigs. Shame we didn’t get to chat with them much, hope we get to see them again before we finish our 6 months. 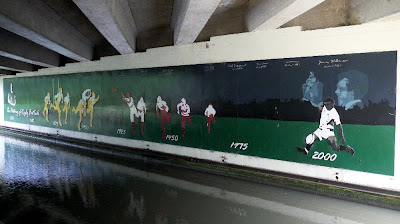 Under the road bridge at Hillmorton, just outside of Rugby. A history of the Webb-Ellis Trophy 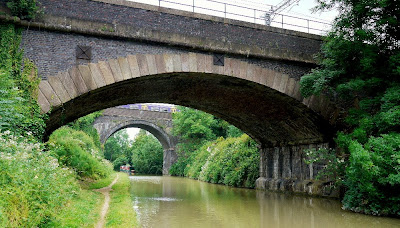 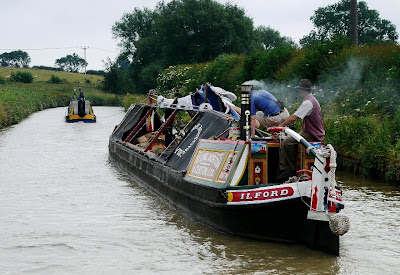 Some more working boats on the way to Braunston for the weekend. This 'butty' is being towed 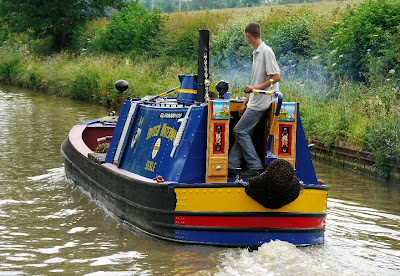 Another cute one... the boat not the owner!

The double locks in Rugby were a doddle, mainly because there was a young lad, around 17, who did them for us! He says he works the locks as a volunteer from March to October, raising money for the Air Ambulance charity – good for him. However he didn't actually show me anything which proved this fact, even when I gave hm our donation, so one does wonder ... He said raised £4,000 for them last year bless him, and I'm sure he really is genuine. He told me a story about another NZ couple who bought a 70foot narrowboat recently in Rugby. As they came out of the Marina a strong gust of wind caught them and swung the boat out of control - they took the boat straight back, re-sold it and bought on around the same size as Northern Pride and started again! 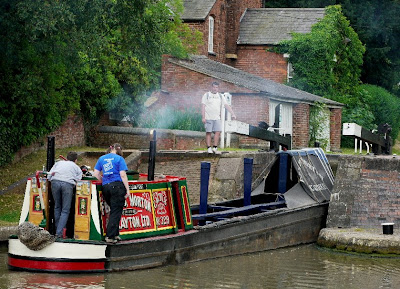 That's him in the smoke helping a working boat

Sad news today that Michael Jackson has passed away, though not surprising. I wondered how on earth he would cope with all those concerts and I suspect the stress of wondering was finally too much for him. He was a childhood icon to me; such a talented boy and man who I think never really had a childhood, never mind adulthood. Money definitely does NOT buy happiness. May he rest in peace.

It’s been a wet day, the nations' tears for Michael maybe? We decided not to venture into Rugby after hearing from the lock boy that the only thing worth seeing was the rugby museum, as not surprisingly it's the place where the game was invented! But they apparently don’t have anything there pertaining to the All Blacks, so nothing of interest to us then … I think also we felt a bit ‘towned out’ by our visits to Warwick and Leamington; and I’m pretty certain that Rugby would have paled into insignificance in comparison.

We need to be in or around Coventry on Sunday as we're getting the train down to Oxford to meet up with my younger daughter Kim for the day. 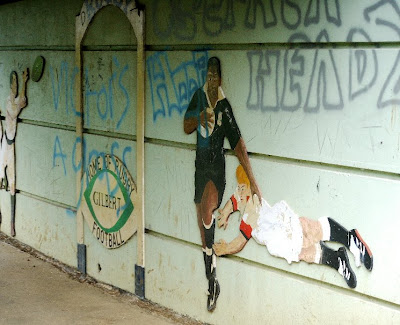 Another bridge mural. Jonah Lomu I think, though I think someone's added their own captions!? 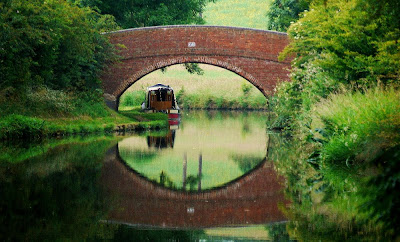 Still very peaceful, though the calm before the storm - and boy did it rain! 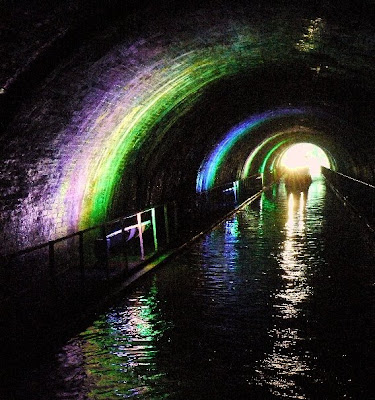 Newbold Tunnel with a very nice light show, albeit several lights blown
The rain persisted in pissing it down most of the day, and at one point we came across half a tree that had fallen over the width of the canal. Coming in the opposite direction was a hired boat from Rose's Narrowboats , the renters of which said not to worry, they would just push their way past, with absolutely no thought about other boaters having to negotiate the obstacle – selfish watsits! We stopped and Barry managed to saw a good deal of it away so that at least there was a path through for following boats. I managed to get a quick snap but it was hard in the pouring rain to do very much at all! Poor Barry, I stayed indoors most of the day doing nothing very much but keeping dry, while he got completely soaked driving the boat! 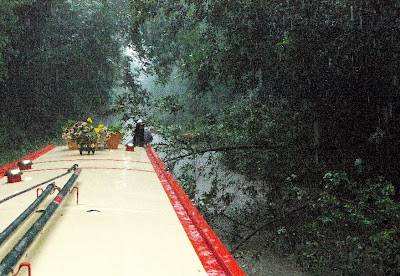 Bit hard to see him for the rain, but he's in there somewhere tackling the tree! We couldn't risk getting the branches caught in the prop 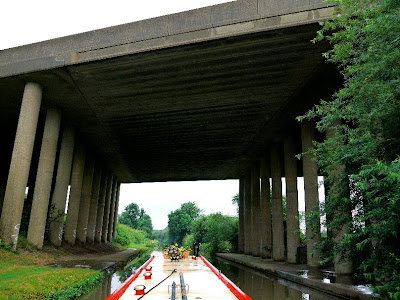 Going under the M6. It was very quiet at this point as there was a huge traffic jam above - the M6 car park!

Virgin Rail whizzing passed us at the speed of light
Tonight we’re moored up close to a small village called 'Ansty', on the outskirts of Coventry. We went for a drink at the pub across the canal - The Rose and Castle - which was more of a restaurant than a pub and had just 3 high stools in the corner for people 'only' there to drink! NOt th emost welcoming of places we've been in ...
We'll go and explore the city where Lady Godiva rode naked on her horse many years ago (but I shall be keeping my clothes well and truly on!) tomorrow. Barry's looking forward to meeting one of her descendants passing by - yeah right, in your dreams!!! He informs me that Coventry is famous for the first British car manufacturing and James Starley's bicycle manufacturing, and is also home of the original Massey-Ferguson tractor, but that's all news to me ... 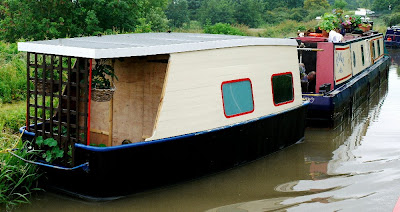