Thursday 7 May
Today we travelled south further expecting to get a fair distance, but after half an hour or so we pasesd a little village called Audlum, and stopped to check out the lockside craft shop (where I bought myself some cross stitch to do much to Barry’s amusement, he thinks I’m turning into an old woman!) and the famous ‘Shroppie Fly’ pub. What a shame we hadn’t moored up here last night as it looked like such a lovely pub though at 11 O’clock in the morning we couldn’t really justify going in for pint! We were going to just stay for a short while, but decided to moor the boat and go and explore as we realised that if we just steamed along without stopping in places we liked the look of, we were actually missing the whole point of us being in England on a canal boat! I think we were starting to get ‘canal rage’ – missing the journey and just looking only at the destination! Although we needed to get a certain distance to meet up with Kim and for Jamie, we decided we could compromise, slow down a bit and possibly rearrange our planned itinerary! 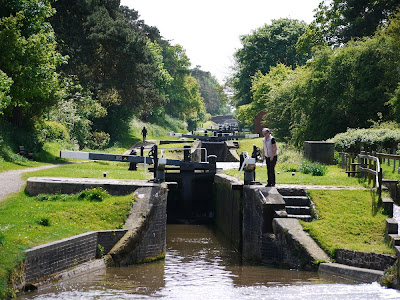 A run of locks can certainly slow you down 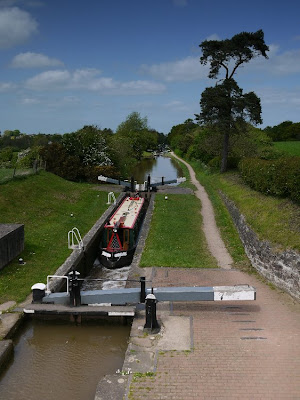 The countryside is worth slowing down for

We walked into Audlum, bought fresh fruit and veg, and had lunch at The Bridge Inn – we’d been informed by a lovely girl walking her beautiful white dog (and normally I wouldn’t say it was beautiful, dogs are not my cup of tea, but this one really was beautiful in looks and temperament!) along the towpath that they served the best fish and chips ever. It turned out to be the hugest plate of battered cod, potato wedges, tartar sauce and mushy peas you’ve ever seen! Barry managed to finish his plate (not the mushy peas, though we did try some in case they really were delicious!), but it beat me into submision!
Having thought we would be living off beans on toast much of the holiday, it actually turns out that we’re eating better than ever as we have the time to shop at the local butchers and greengrocers so we’re having fabulous, tasty food along with lots of fresh (and boy is it fresh!) air and exercise. 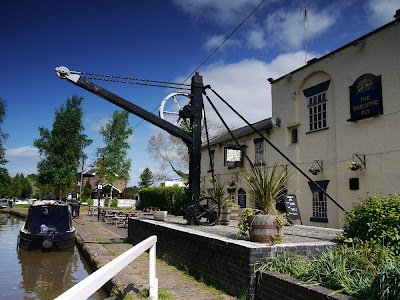 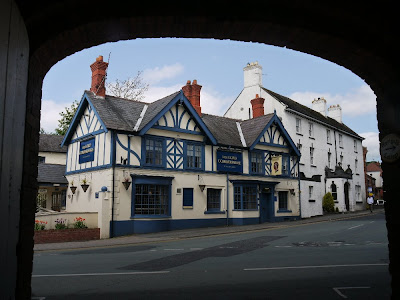 A quaint pub in Audlum 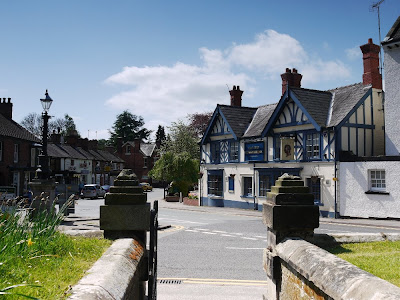 Picture from the front steps of the church. Barry had to wait as the vicar arrived in his van and parked right in front of him on the double yellow line. Sandra nearly wet herself laughing! 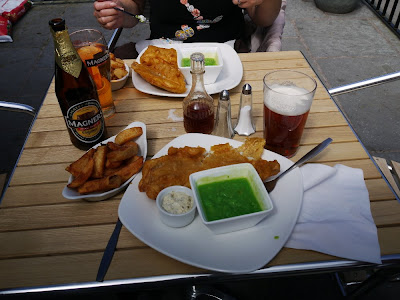 Fish and chips special at the Bridge Inn 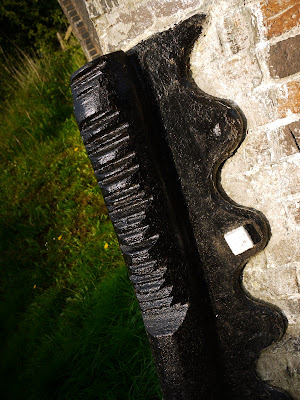 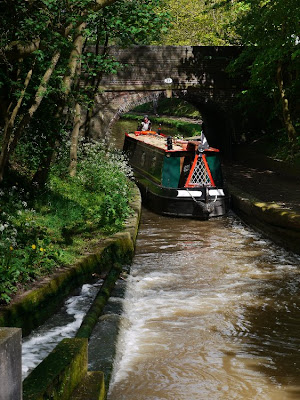 Then off for some more locks 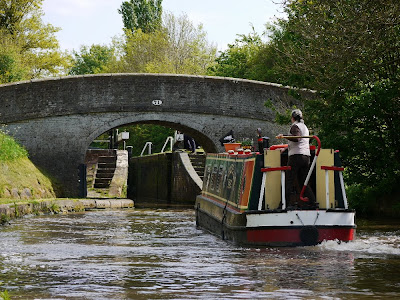 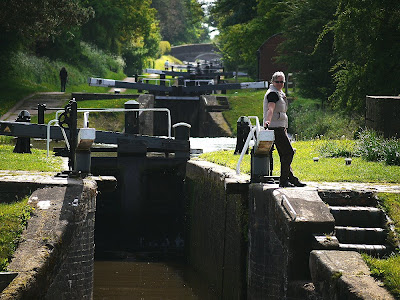 Oh no, not more locks!

We had to work our way through 20 locks so took it in turns to do the locks or drive the boat. I thought I was doing really well and getting the hang of it until I beached the boat at one of the locks! The overflow coming from one side and a gust of wind blew me off course, and to compensate instead of reversing I went faster to try and steer out of the disaster, but to no avail! I’m afraid the flag almost lost it, but it is still living to fight another day – you may have to send a replacement soon Deb!!! Poor Barry had to walk across the bridge and traverse an electric fence and barbed wire to climb down the bank and release the boat – embarrassing as another boat was waiting for us to come through the lock! I veered between panic and wanting to cry and seeing the funny side; luckily I realised that I really wasn’t in danger of falling into a black hole at the bottom of the canal and laughed about it. I have to say I think Barry is one of the most patient men I have ever met, I have never seen him lose his temper or get stressed about anything and he was as calm as during the whole thing bless him, what a treasure I have. 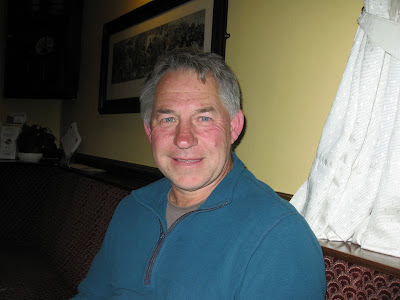 It's hard to believe but it took us all day to travel 10 miles and we were more or less flat out after our stop in Audlum! We moored at Market Drayton and decided to remain there for Kim and Joe to travel to Friday evening.

Lisa came to see us on her way home from work, and Barry and I walked along a very busy road (the A53 I think!) to meet her at ‘The Gingerbread Man’ where Barry and I shared a chicken salad as we were still full of fish and chips!!

Friday 8 May
Following a stroll into Market Drayton, we took the bus into Shrewsbury and had a lovely day out exploring and getting our broadband top up for the month. After spending almost 10 pounds to go to Shrewsbury we discovered that a shop in Market Drayton sold the top ups so we needn’t have travelled so far! Never mind, it was worth the trip as Barry found many sights he had missed on our last visit to Shrewsbury. 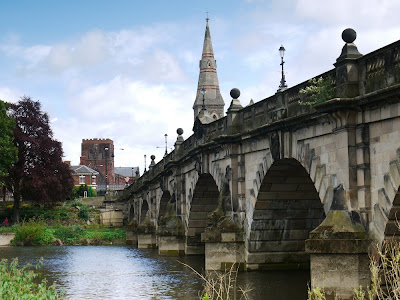 One of the many bridges surrounding Shrewsbury

Trying to arrange for people to visit the boat is not as easy as it sounds we are discovering, but we're finding solutions to the challenge daily! Today’s challenge had a number of twists and turns too complex to even try to explain, but eventually all worked out and Kim and Joe arrived at 2330 and we found a car parking place. The stingy Landlord of the Talbot Inn at Market Drayton, despite having a huge empty car park, declined ‘allowing’ us to park a car there for 2 nights. I’m sure he had his reasons, though it would have been good to know what they were as it was very difficult to comprehend. Ah well, I put a hex on him and I suspect he had a very poor nights sleep last night! We will not be honouring him with our presence in his otherwise lovely little tavern… 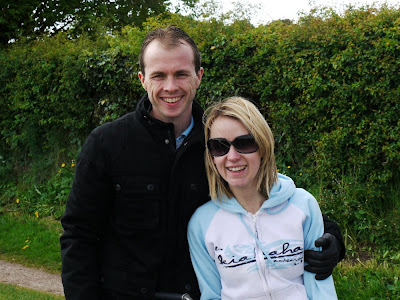 The lovely Kim and Joe
Saturday 9 May 2009
Motoring towards Wolverhampton with Kim and Joe, a very pretty part of the canal system. Kim and Joe shared the driving and locks, and unfortunately Kim experienced the overflow challenge and beached the boat once more! But the day was saved again by boatman Barry of course! 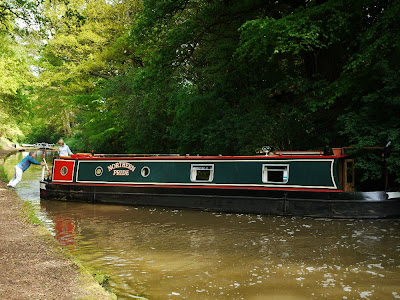 Kim in the 'beached' boat! 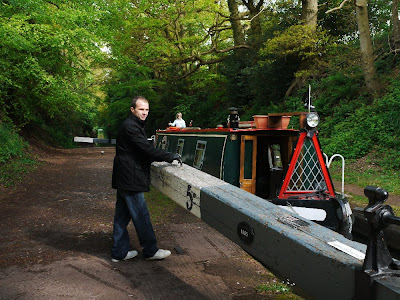 We moored overnight at Gnosall (silent ‘g’!) and had a pub crawl to the 2 pubs on the towpath, The Navigation and The Boat. The Boat was filled with the most amazingly unique and colourful characters and Joe and Barry played pool with 2 of them. A dog was in the pub and everyone, including the bar staff took turns throwing the ball, yes in the pub, to the dog!!! Often they would put the ball up on a table or behind a seat and he would always find it, very cute! 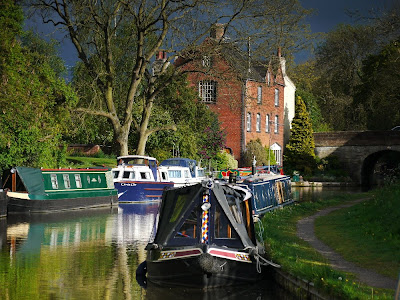 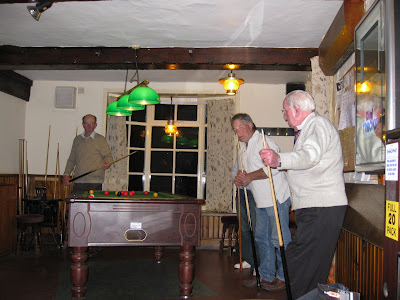 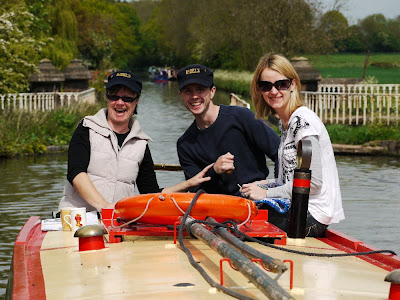 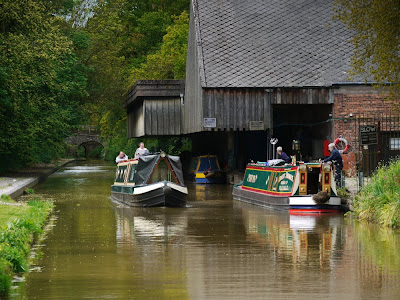 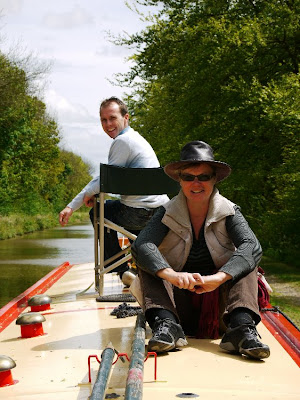 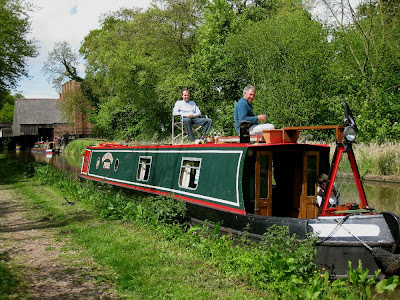 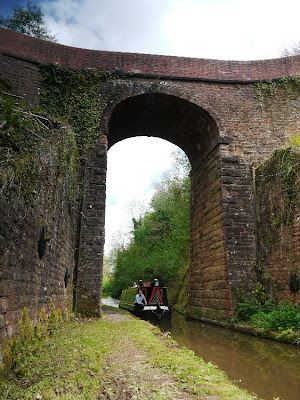 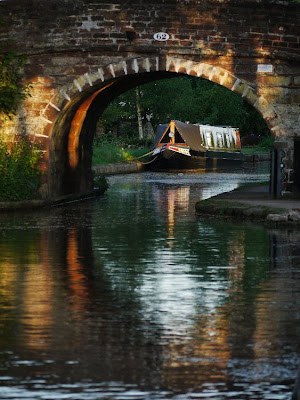 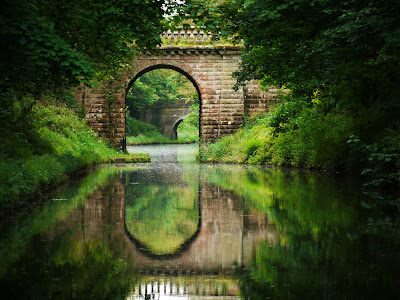 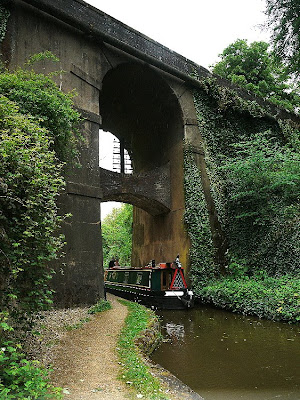 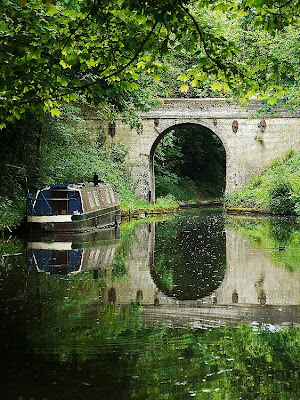 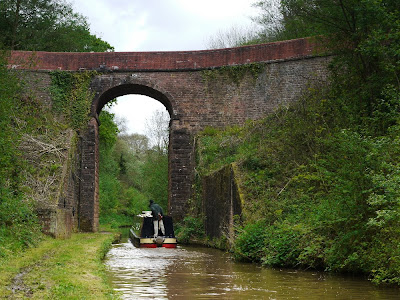 Today we travelled to the end of the Shropshire Union Canal to Napton Locks at Wolverhampton where we met up with my mum and dad for lunch. 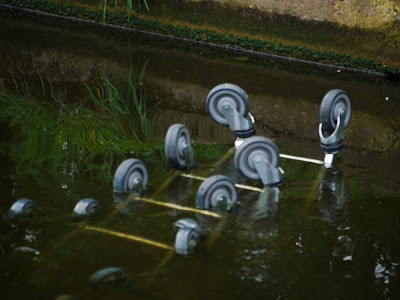 Must be getting closer to Wolverhampton! 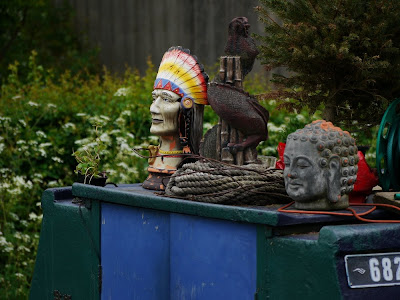 People put the strangest things on their boats, very cute!
Jamie arrived around 7pm and we looked at which way to go next...
Posted by Barry and Sandra