Messing about on the river... 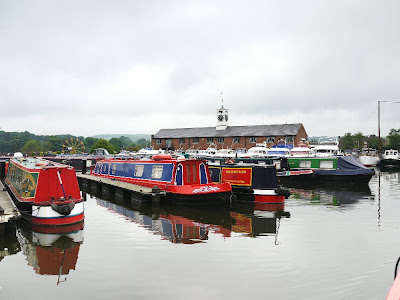 Friday 15 May
We left Stourport today before the hordes came for the ‘boat enthusiasts’ weekend’; as well as the fact that our mooring only allowed us to stay until midday. My mum and dad returned as they’d forgotten a piece of our washing (thanks mum!) and also brought a parcel that had been delivered for Barry – a missing part of his brewing kit. Barry jumped up and down on his bike when I told him it had arrived, so now he can really get a move on with the home brew which he's started but has been waiting for the forgotten ingredient!

Mum and dad were persuaded to help with the 3 locks that took us out onto the River Severn... 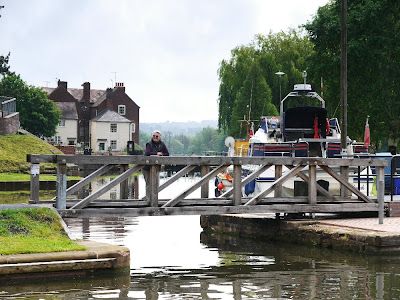 My mum looking pretty as a picture bless her 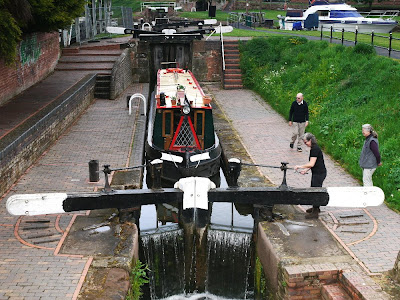 So if we're all doing the lock, and Barry is taking the phot, who's manning the boat as it sinks into the abyss???
After reading a few things about the Severn, I had been a little nervous (thanks for your reassurance Roger whoever you are!) and had already checked out that the life jacket was a good fit, then just before driving into it I tried on the life ring for size too! 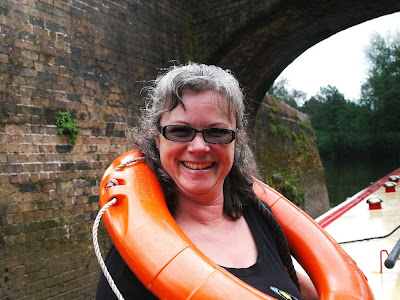 I needn’t have worried as the river levels were below the green on the flood chart. Despite how it feels here, England hasn’t had that much rain recently so the river was as calm as a sleeping baby. In fact, after 4 weeks of canals, many of them only wide enough for one narrowboat to pass through, the Severn was like a six-lane motorway in New Zealand – we only passed one boat, going in the opposite direction, all the way to Worcester (it took us about 2 hours)! Barry was like a pig in shit at many points along the way, and took so many pictures of trees and river (very pretty though don’t ya think?) that his memory card was full when we arrived at the day’s destination! 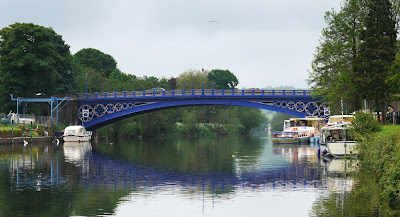 A pretty bridge just outside of Stourport 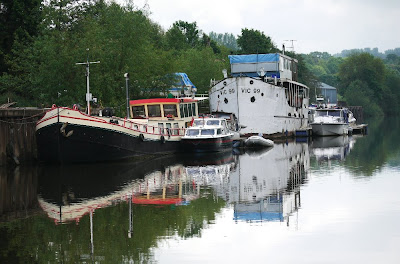 The locks were also very different to those on the canals, and could fit half a dozen boats in at a time it seemed, but then most of the boats on the river are rather large. They're operated on a traffic light system and are 'manned' – what a boring job that must be especially on days when there is hardly any traffic. And what on earth do they do in the winter? Anyway, a lot less energy for me and my arthritic neck and sore knees – I need a new body, preferably a young, fit and agile one! 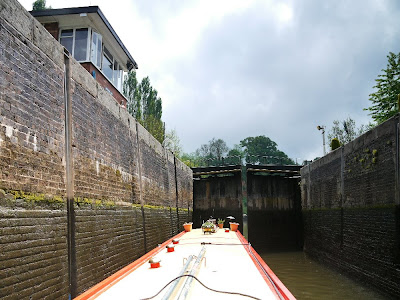 Plenty of room for our little Northern Pride 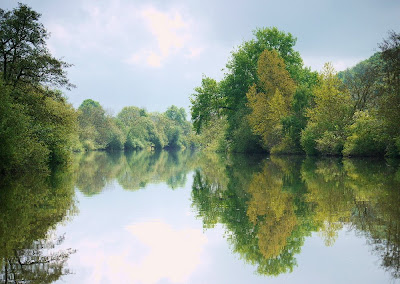 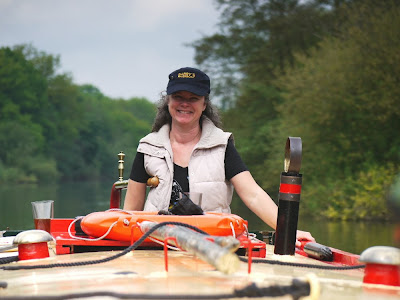 Abandoned the life ring and even went down to short sleeves for part of the day - and driving was surprisingly a doddle!! 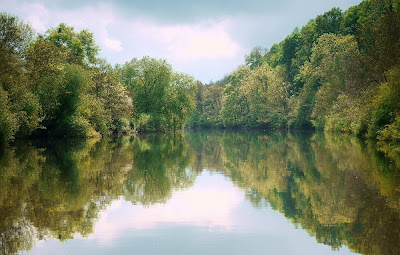 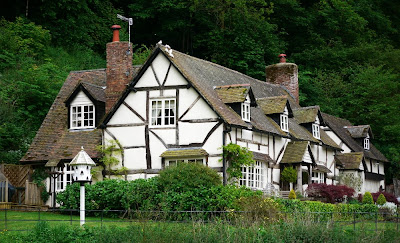 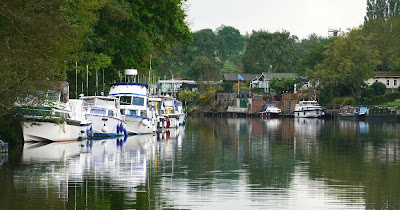 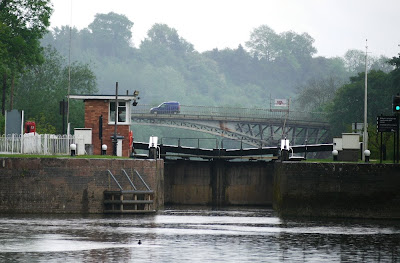 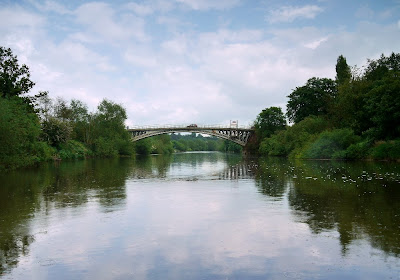 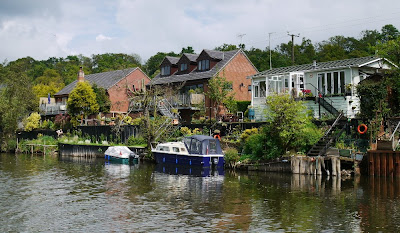 How the other half lives - probably MP's second homes paid for by the British public!!!! 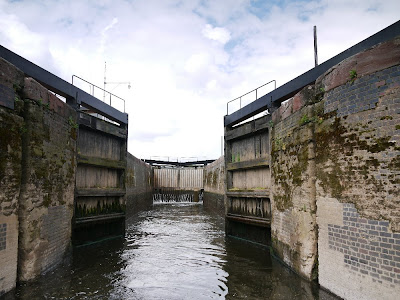 Entering one of the locks 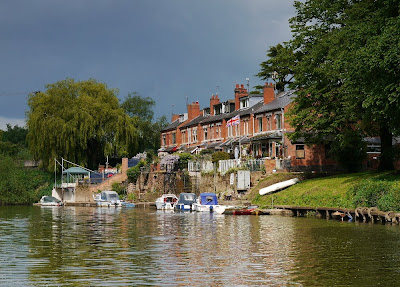 Homes (more MP's?!) by the river on the oustskirts of Worcerster 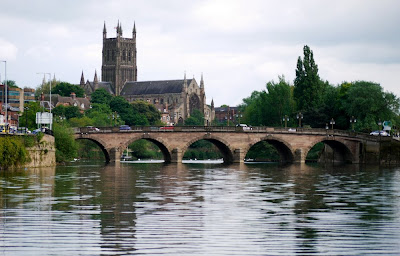 Worcester Bridge and the Cathedral in the background

We moored underneath the railway bridge in Worcester; thank goodness the trains stopped at about 11pm and didn’t start again until 0700.

Today there is lots of activity on the river with boat races going on and speed boats speeding past. We are rocking around on our mooring but still holding fast. Barry has gone for a bike ride along the towpath in the wind and the rain, brrrr...

We'll be carrying on down the river later and plan to get to Upton-Upon-Severn this afternoon, a very picturesque village not far from Tewkesbury where we hope to get to on Sunday.

Someone asked me yesterday if I was bored yet - how on earth could anyone be bored doing what we're doing? We're loving it - you never know what the next day is going to bring. Apart from reading the Guardian every few days to catch up on the emerging govermental crisis (not sure why but it it fascinates me, who on earth do they think they are?!!) we busy ourselves reading, writing the blog, playing travel games like ludo and snakes and ladders, eating lovely food, drinking in the boat or the local pub, cruising and looking at the lovely scenery and chatting to local folks (apart from the occasional stuck up ones who don't talk to us!), entertaining visitors, and of course talking to each other and planning what we are doing over the coming days, weeks and months. No, we're definitely not bored...