It's been another glorious summers day – though I think summer doesn’t ‘officially’ begin until Monday. Such a shame that Barry isn’t here to enjoy England in the sunshine, let’s hope this decent spell lasts for the next few weeks.

Hurrah! The internet has 'allowed' me to publish a few photos this evening without too much hassle for once! 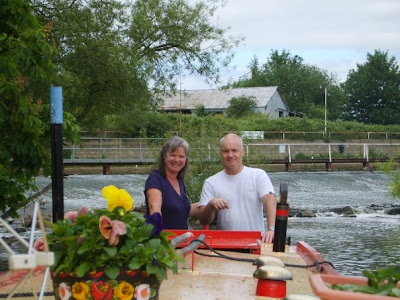 Me and Ray 'at the helm' - quite safe though, no engine running and all tied up! Note the pansies in bloom Barry xx 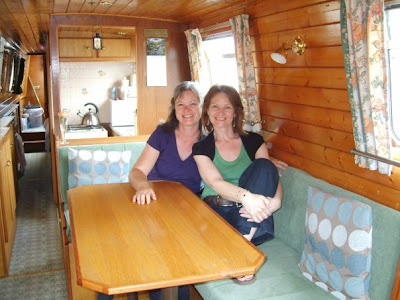 Me and Viv on the boat - looking very tidy I might add! (the boat that is!) 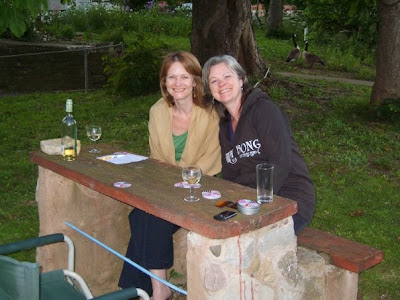 On 'my' island where we had dinner and then played cards - round ones! Oh yes, and a glass of wine or two... And note the geese in the background to Viv's discomfort!
Bob phoned and asked me out to dinner last night - for those of you wondering, Bob is a friend of the people who we gave a hand to in the locks coming into Evesham, and who's going to help me drive Northern Pride to the Marina on Monday. I was a little uncertain going out with someone who is, after all, a relative stranger, but as Barry had asked just that morning whether I had yet gone to the rowing club with him I thought he wouldn’t mind (he's so totally NOT the jealous type bless him). We had a pleasant evening at the Bridge Inn at Offenham, just up the river, and I was safely back on board the boat (alone) by 10pm. I did feel a little vulnerable, something most men never experience and find difficult to understand I think!

Not a lot else to report really. Just chilling on the boat; walking into Evesham and pottering around the shops (they have a huge NEXT store just out of town that I had to visit today, not letting on if I bought anything or not!); reading books; going on-line checking the blog & stats, hotmail and facebook; eating and drinking (have treated myself to some Pimms this evening, so having Pimms and Lemonade, mmm..); and of course sleeping (have had a couple of afternoon naps these past few days, bliss!); and generally reflecting on where we are and where we’ve been. It’s actually quite a luxury to just ‘be’ for a while, I do feel tremendously lucky. So many folks are trapped in the busy world of work and don’t get much time off – I remember it well!

It’s still very pleasant here on the island, the goslings have apparently gone to their nursery above the weir - they only stay on the island for the first 2-3 days after hatching, so I haven’t been able to catch any more glimpses of them.

I tried to book a ‘ghost tour’ of Evesham for tomorrow evening, it sounded like a fun thing to do, but unfortunately it was all fully booked. They're only held on a Thursday or Sunday evening, so that’s out now, shame…
Missing Barry heaps, but a week has already passed so only 10 days to go and he should be back, depending on how things are in NZ. It'll be so good to have him back on board and be on the move again, seeing the sights along the way and meeting new people - and of course publishing a more interesting blog with Barry's fabulous photo's!!!!
Posted by Barry and Sandra