Enjoying our last full day on the Kennet & Avon - rats!

Due to a couple of 'beaching' disasters yesterday, we only got as far as Tottenham Hale late last night.  So with Freddie and Tom on board, we left the delights (few and far between!) of that London suburb this morning and are heading to find a 'safe' mooring in central London.  With a bit of luck we'll get near to St Pancras Station, ready for our next round of visitors tomorrow - my daughters Lisa and Kim, and Barry's daughter Jamie ...

Due to the lock closure, we didn't set off until after 1100hrs as there was no point in arriving at Aldermaston before the lock opened at 1600hrs.  Barry was thrilled to find a shop in Newbury selling home-brew to make some more beer, so the morning wasn't wasted!

It was an unpromising start weather-wise, but happily it turned out fine once again with enough heat in the sun to match a warm summer's day. 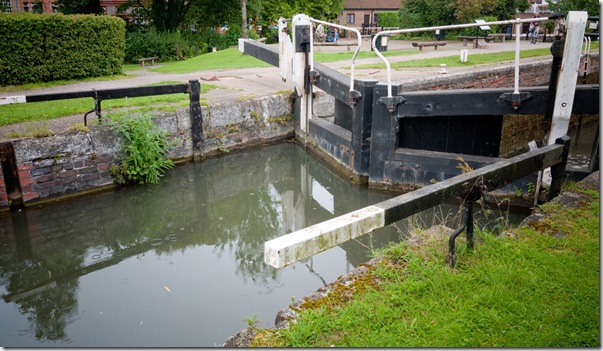 Newbury Lock with its strange configuration of wooden beams 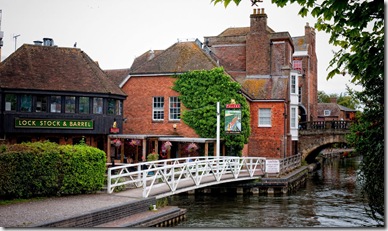 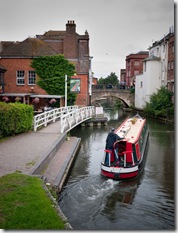 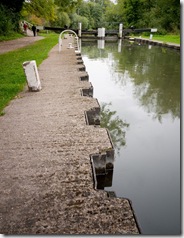 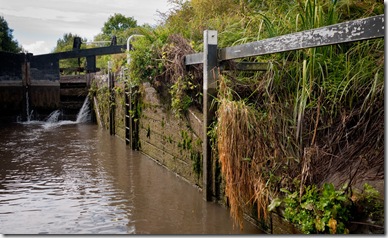 An amazing variety of locks along this section

Just outside Newbury we met a hire boat with a family of Kiwi's from north of Auckland, who were on the canal for a week's holiday.  Although we've enjoyed this canal, the stretch they were doing probably isn't the most idyllic for a week's cruise due to the endless and difficult locks, so we hope they get a positive impression of the system. 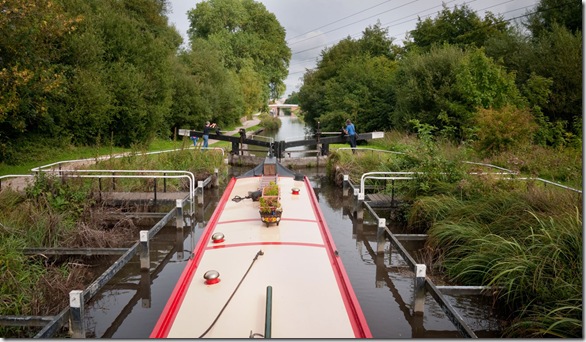 At Monkey Marsh we found a man sitting on the gate ready to help boaters through, bless him

We then shared a few locks with NB Odin, whose crew kept telling us they were novices, as they'd won a day on the boat as part of a church raffle.  They were very friendly people, and we discovered that bizarrely one of them had a cousin who'd lived in Gisborne for many years working as a doctor, and also brother living north of Auckland - what a small world it is! 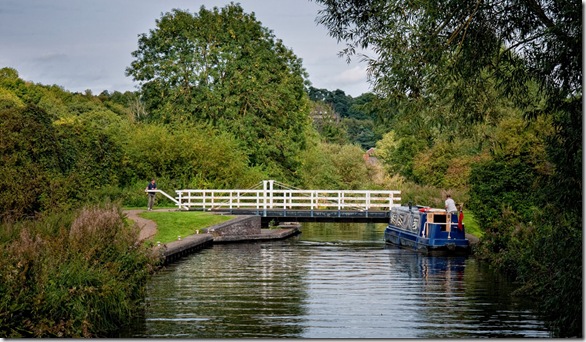 By the time we got to Lock 95 just after 1600hrs, there was another boat coming up so we had a short wait for them.  We were then stuck in the pound for half an hour as you're not allowed to open the swing bridge until after the rush hour at 1730hrs!  There were another couple of boats below the bridge who'd had to wait as they'd just missed the slot, but they were kind enough to open the bridge for us - so the poor traffic was building up by the time they would've shut it after them! 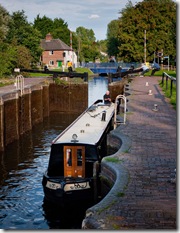 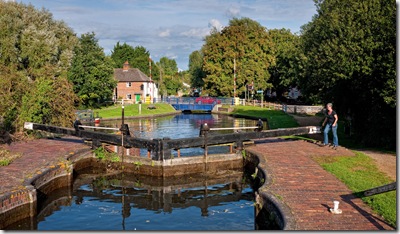 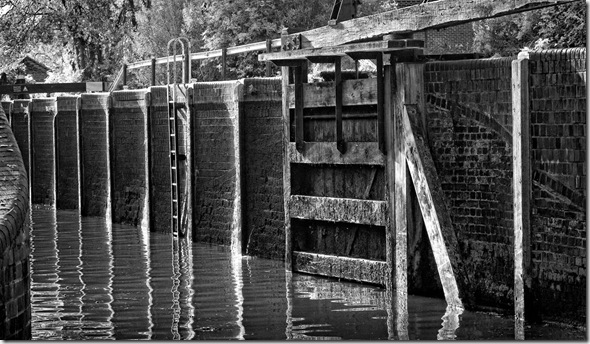 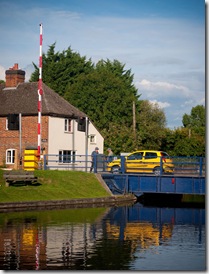 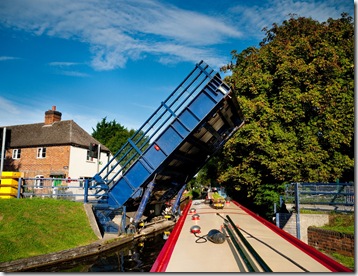 We had a holdup here till the 'rush hour' finished at 1730hrs - very different to the 'rush five minutes' in Gisborne! 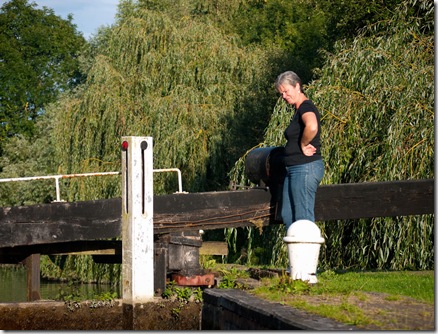 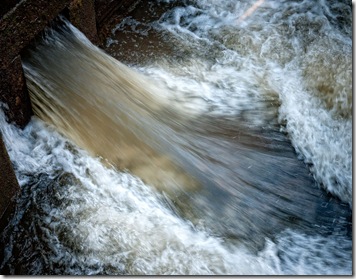 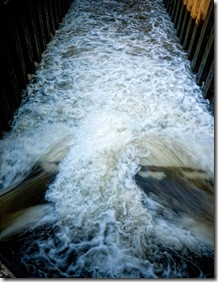 On a completely unrelated note, I've finally decided to complain about my new glasses while we're in Reading - if we have time.  The whole purchase has been a disaster from buying them in Banbury to collecting them in Oxford - I detest the varifocal lenses, which could possibly be because I didn't pay the extra £80 on top of the £256 I'd already spent, for 'anti-glare' or the 'reactions'.  I keep trying to wear them, but they're just hopeless.  I can't see any clearer than I can without them, so also wonder if the prescription is incorrect - but maybe I just can't do the varying long or short sight thing?  The frames were chosen in a rush too, and I'm not keen on them.  The sunglasses seem OK, but I do look a little daft wearing them on cloudy, rainy days that are still bright!  Specsavers state on their website to have a 'no quibble, no fuss guarantee that if you're not happy within three months of purchase they'll exchange' - so we'll see!  In exasperation I even tried my old glasses today, but they're just as hopeless due to the scratches on them!  Can Specsavers redeem themselves I wonder ...

Message to self - don't be rushed into making decisions that you don't want to make by Saturday staff in opticians who've been trained to push punters through like a cattle market production line!!  I've discovered it's a dilemma to buy such vital things when you're living on a boat and travelling to different places on a timescale; I may have to put it down to a very expensive experience! 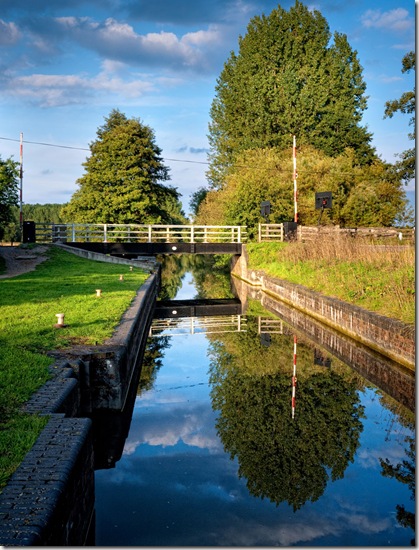 A tranquil scene late in the balmy afternoon

We continued as long as we could in daylight, but by the time we'd used the facilities at Tyle Mill Lock, dusk had fallen.  While going to put a bag of rubbish into one of the skips I opened the lid to find three pairs of eyes staring back at me - it took me a few seconds to realise they belonged to large rats - aargh!  I screamed and dropped the lid, with a sick feeling in my stomach knowing I'd have to open another one to deposit the bin bag.  Luckily the next one had nothing living inside as far as I could tell, so I threw the bag in and ran away - gross!

We leave Kennet & Avon canal tomorrow, having been on it since Sunday 8 August.  We've loved every moment (well apart from the broken toilet incident, but that's not the canal's fault!).  Before we arrived we thought it'd be rather tedious to do the same journey twice, but have found it great to return and visit places we missed the first time, know where we're going, where the shops and some pubs are (sadly we're not frequenting them very often - too little money available in the time we have left!), and where the best mooring places are.

We've also been fortunate to meet many wonderful people along the way, and caught up with some family and friends:

The other joyous things for me have been the abundance of wildlife; the incredible variety of locks, swing/lift bridges and aqueducts; so many villages, towns and cities close to the canal and embracing their waterway as an attraction not something to be ignored; and of course the wonder of mooring so close to Pultney Bridge in Bath and being in the 'Floating Harbour' at Bristol - awesome! 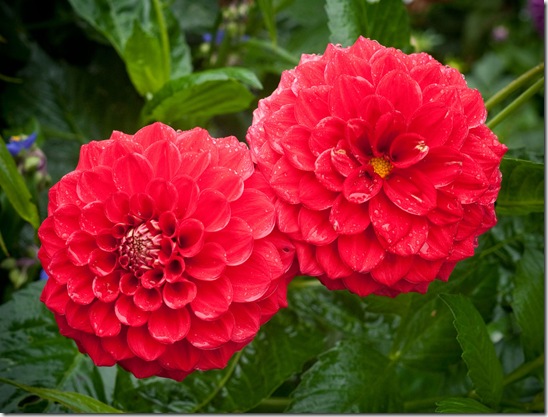