A day in Dartmoor

On Thursday we made it through from Teddington to Limehouse - that's all I'm saying for now!  We're now on the River Lee, heading to the River Stort and Bishop's Stortford over the next few days ...  Meanwhile, Sandra left the boat Friday lunchtime to spend a weekend in north Birmingham with her sisters and to attend a surprise 50th birthday party, so left Barry and Tom journeying alone.

Today Viv and Ray chose a trip to Dartmoor for us, a huge expanse of land in the South West of England.  It was a bleak day, perfect conditions for the moody moor where it's frequently misty and mysterious.  We went as far as Princetown, to the Dartmoor Prison Museum, adjacent to the huge institution full of criminals.  It was very scary to see what sinister items have been discovered when cells have been checked over the years, made by prisoners from a variety of 'harmless' things - for example an extremely sharp looking knife, made from matchsticks. 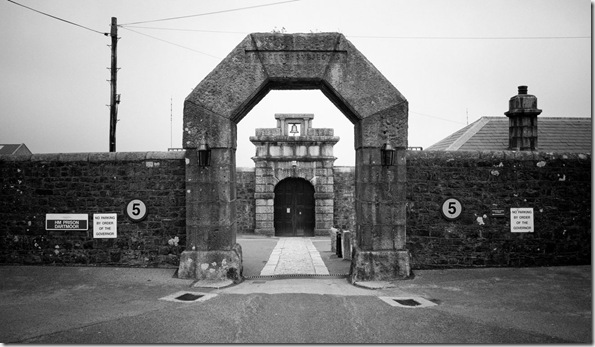 The prison entrance - it's OK to take a photo, so long as there's no guards or prisoners

We spent a couple of hours in the museum, fascinated by it's history.  Ray had picked a spot for lunch which meant travelling thorough other parts of the moor, so we took the opportunity to stop at a couple of places to see the bridges - it's very pretty around here ... 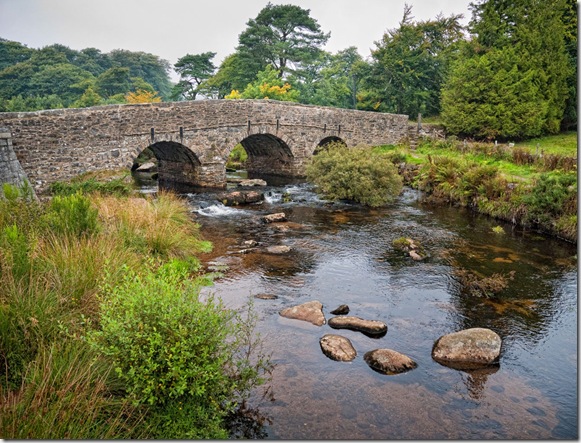 'Post Bridge', somewhere in the middle of the Dartmoor National Park 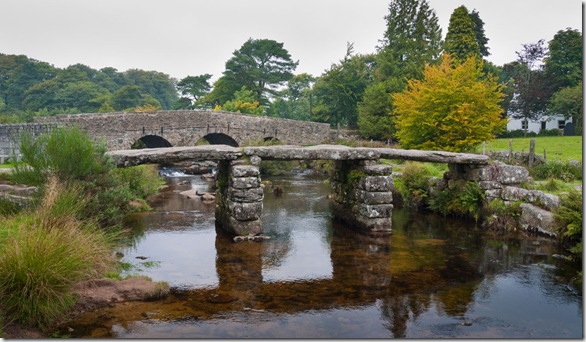 Driving on the lonely roads we came across many Dartmoor ponies - they're such elegant animals, but apparently they sometimes have to cull them because it gets too expensive to care for them over the winter when they can't get any food.  Shame!  We were told that you have to be careful as they can bite, but they seemed friendly enough ... 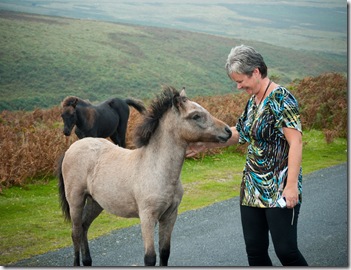 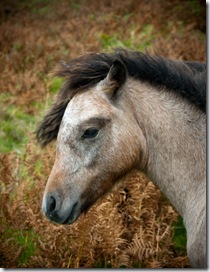 Sandra befriending one of the Dartmoor ponies

Further along there was a Bronze-age settlement (Grimspound) to see, so we parked and walked up a hill for the best view.  It's amazingly well preserved considering how old it is and you can almost feel the presence of the people who would have lived there.  Such a simple life, but fraught with danger and hard work I expect. The village is made up of 24 stone houses surrounded by a low stone wall.

The Tor where they would have been able to look out for miles around, was up another hill.  Viv and I chickened out of climbing to the top and chilled half way, while Barry, Ray and Harry did the manly thing and strode up for some photos ... 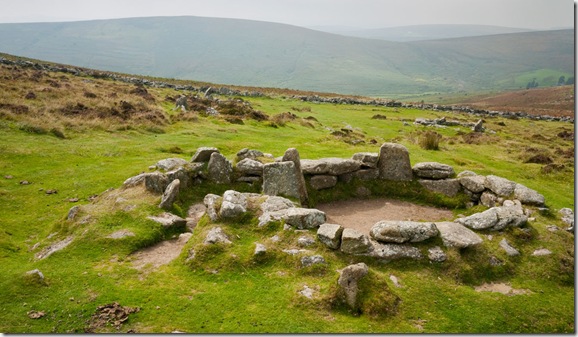 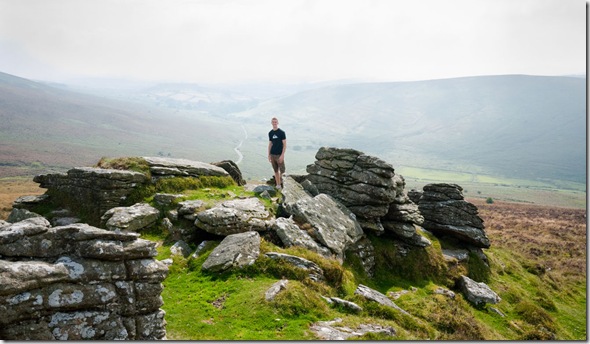 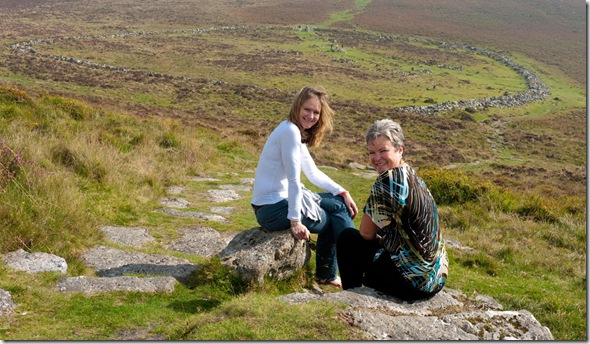 while Viv and Sandra chat and chill half-way up, with the perimeter wall of the settlement below 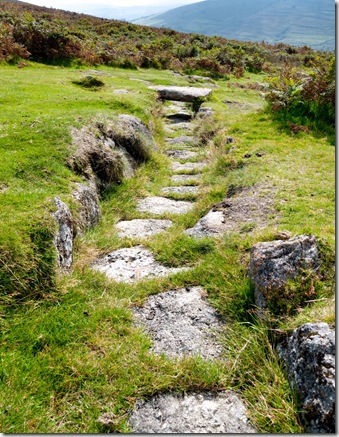 Lunch was rather late after all the sight-seeing, but well worth the wait.  We sat out in the afternoon sunshine at the 'The Old Inn' in Widecombe-in-the-moor.  Barry had a pint of 'Fursty Ferret' while I sampled a tasty local cider - you knew it was made from real apples, not like the Bulmers and Magners found in most chain pubs.  After a short walk around the village, we headed back to Exeter. Sandra, Ray, Viv and Harry waiting for their late lunch 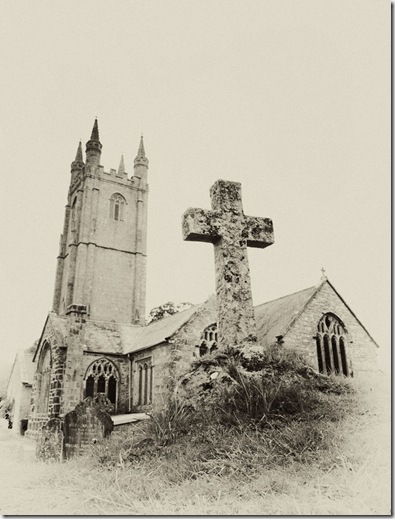 The church in Widecombe-in-the-moor 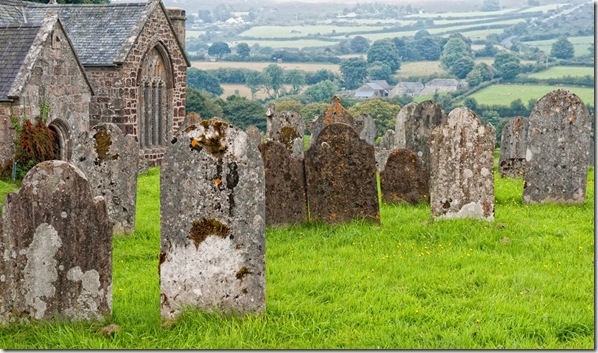 Looking through the graveyard over the surrounding countryside

When we returned to Viv's house I had a couple of texts about the earthquake in Christchurch (I'd left my phone charging!) - how fortunate that it was in the middle of the night so few people were out and about and there were no fatalities.  But what a mess it made.  We can definitely sympathise as I'd been in Gisborne when we had a huge earthquake in December 2007 - if you click on the link the initial footage is of Barry's photography business 'D & K', where we'd been sitting on the first floor having a glass of wine after work to say goodbye to one of his employees when the quake struck - you'll note the immense damage to the veranda below.  This shake occurred at 2055hrs - it had been late night shopping till 2100hrs ready for xmas.  Once again there were no fatalities apart from an elderly lady found the following day at home who they believe died of shock bless her.

That evening we watched the first TV of our trip, catching an episode of the X-Factor, and I have to admit it was entertaining, Simon Cowell really tells it like it is, no holds barred!  Then it was Casualty, I haven't watched that for years!  But it didn't convince me that sitting watching TV is any way to spend an evening and not long afterwards I was falling asleep, lulled by the monotony of the screen.

Tomorrow we're off to the seaside to visit my niece and her family who have come down for a week - how fortuitous! 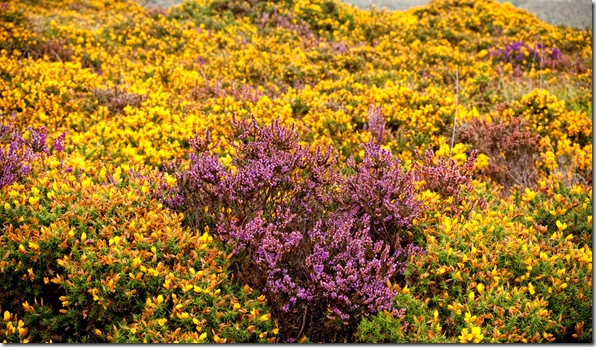 Gorse and heather - pretty as a picture