The internet coverage is rather sporadic on the Shropshire Union, so we've got a little behind in our posts …

Back to Scott's Bar

Last Saturday we surprised everyone at Scott's Bar in Tattenhall Marina and turned up for the weekly entertainment. It was a quiz night organised by Jeff, and we teamed up with Mike and Jane. Fortunately we came second - it's more than our life's worth to win again!

Great to see you all again - if all goes to plan we'll be back in the autumn.

Right! Time to move south and leave our autumn/winter 'comfort zone'. There's work to be done … 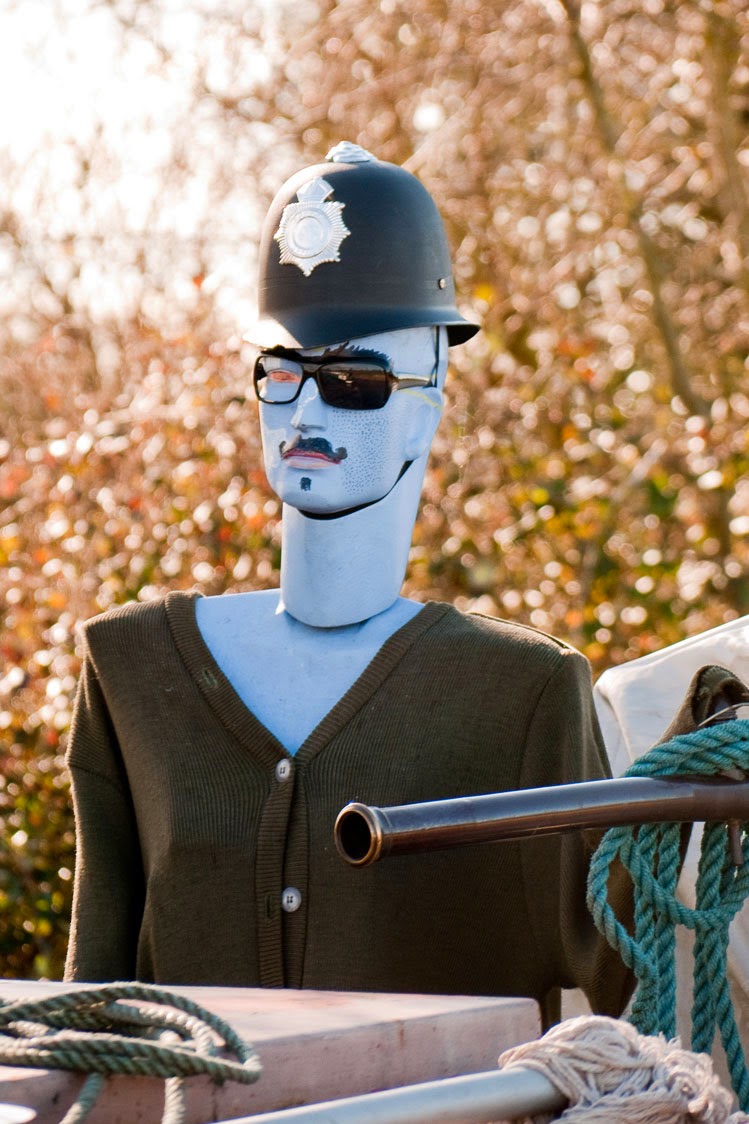 Heading down the Shropshire Union, we spotted this guy guarding someone's boat - looks like a bit of face painting competition!

A few wide locks still to do on the way. They take a bit of filling, and the gates certainly give you a good work-out!  We did Beeston Iron Lock with Tom and Jan last August, on our way to Tattenhall Marina before Barry had to return to NZ. 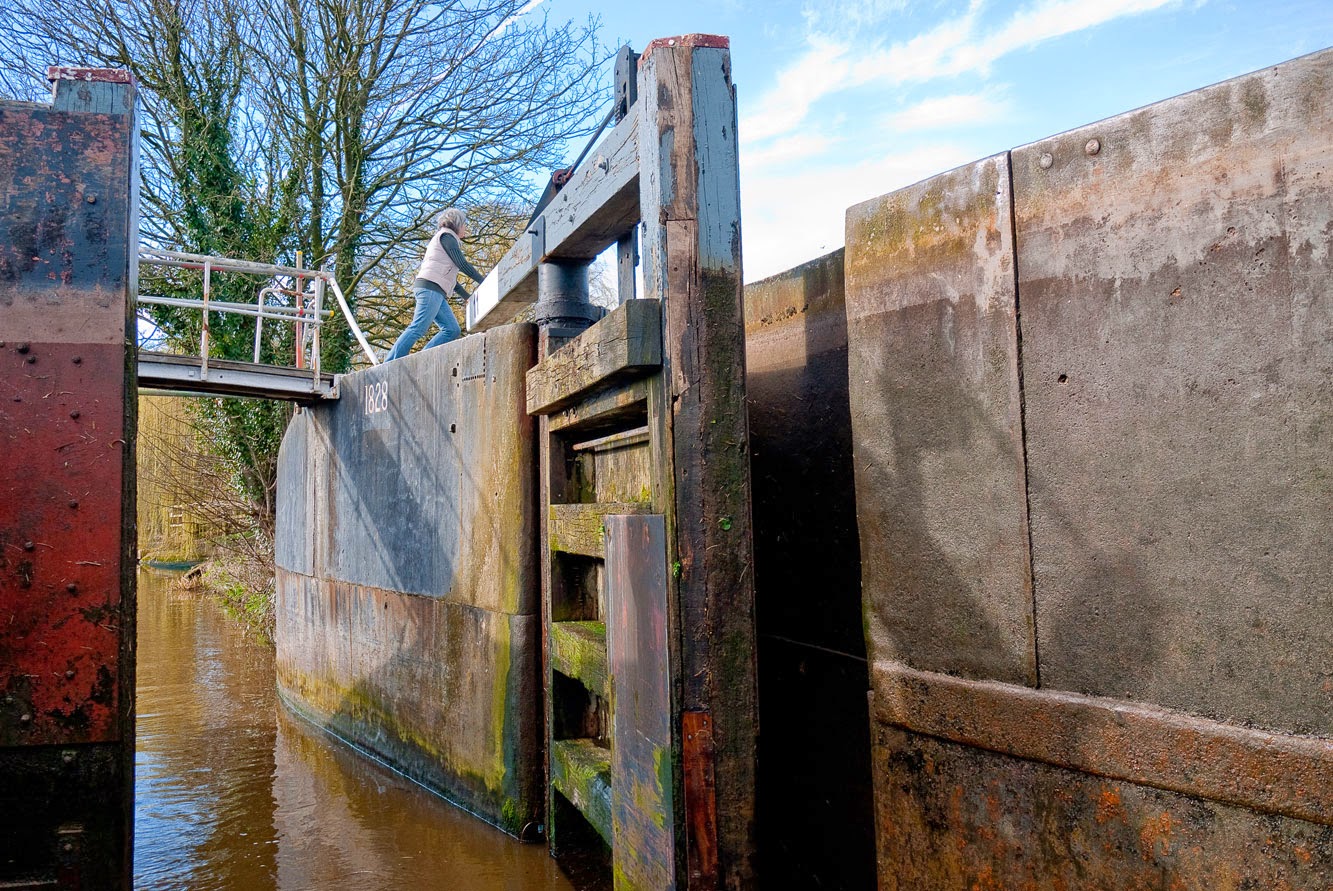 Who needs to go to a gym when you can pump iron at a lock? 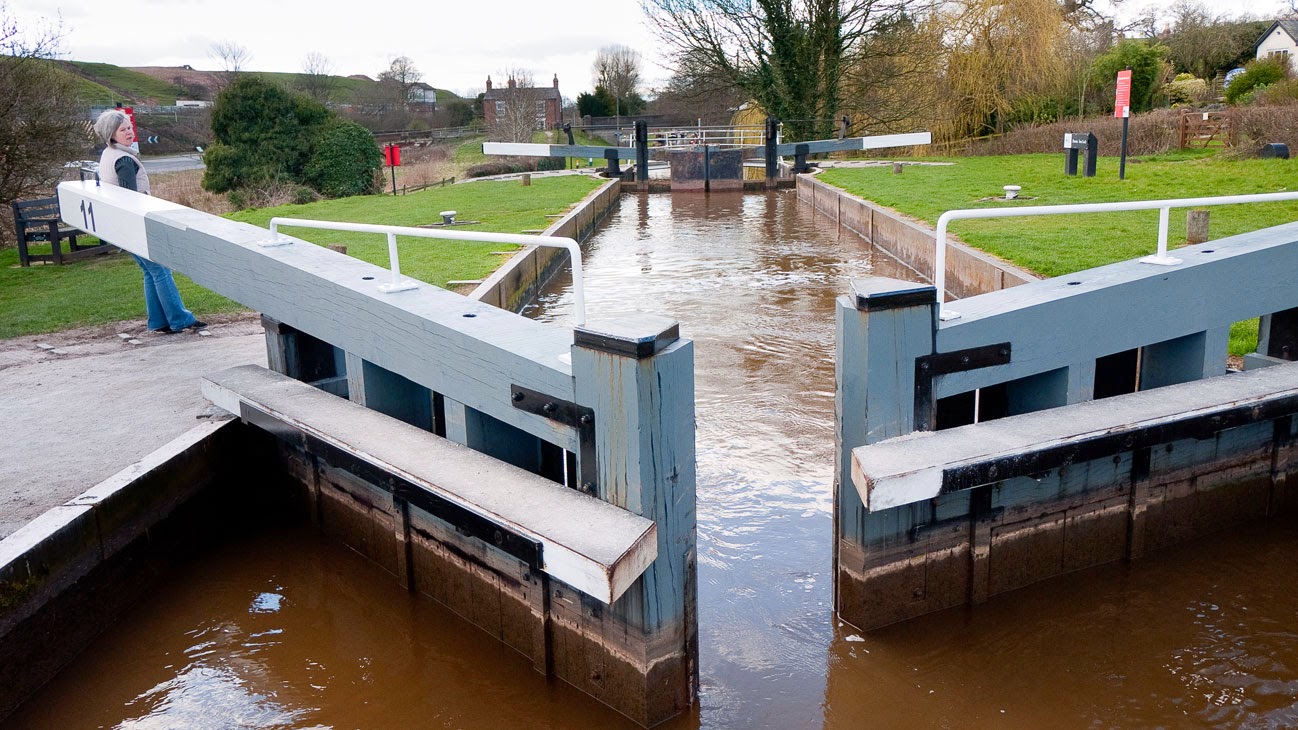 During our lengthy stay at Tattenhall, Barry took the opportunity to make some top-boxes for extra storage, and he's had a number of people admiring them and asking where he got them from. Someone even suggested he could start a business making them! No thanks! The hours he put into it wouldn't be able to be reflected in the price. But they do look rather smart don't you think? 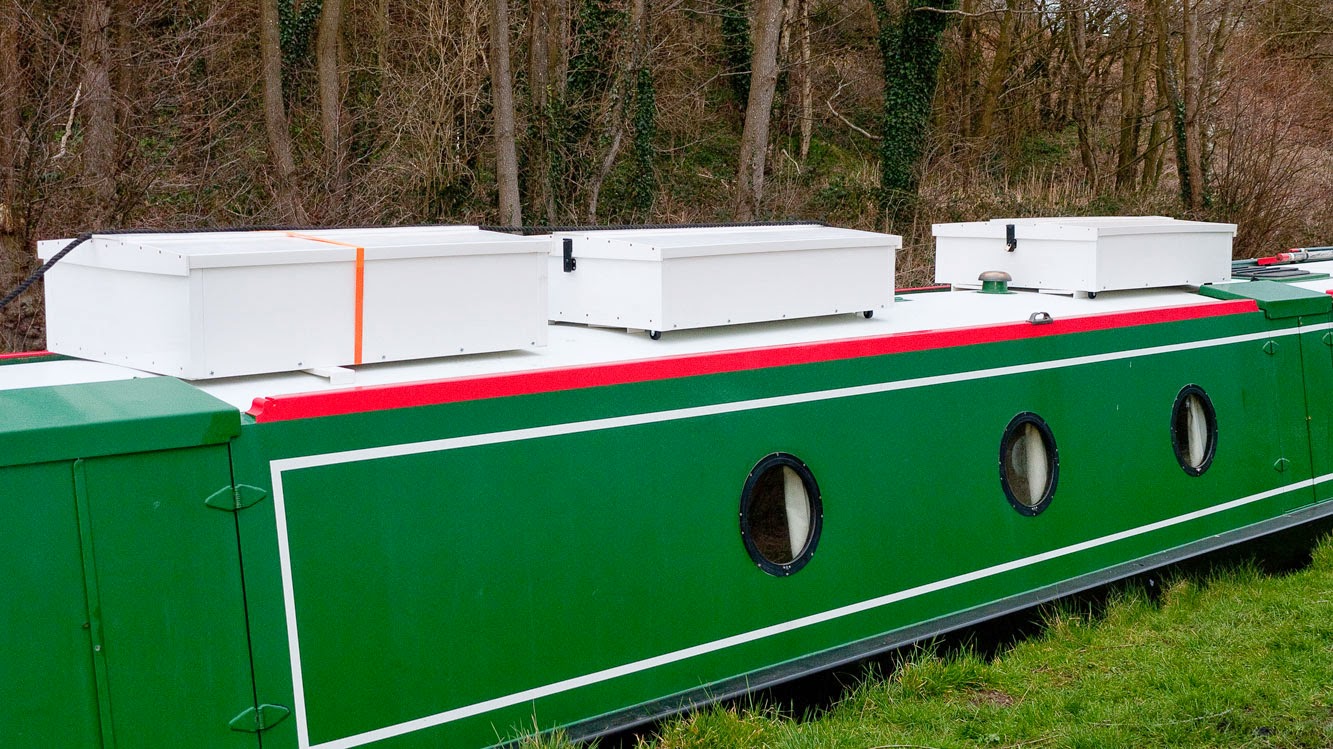 Three top-boxes sitting in a row

Passing Barbridge Junction, where we bought Northern pride in April 2009, we continued south on the Shropshire Union for the first time since that year.

Arriving at Bunbury late afternoon, we needed a few groceries but had no idea if there was any hope locally. So we had a walk to explore, just in case there was anything around (unlikely on a Sunday evening I know!). 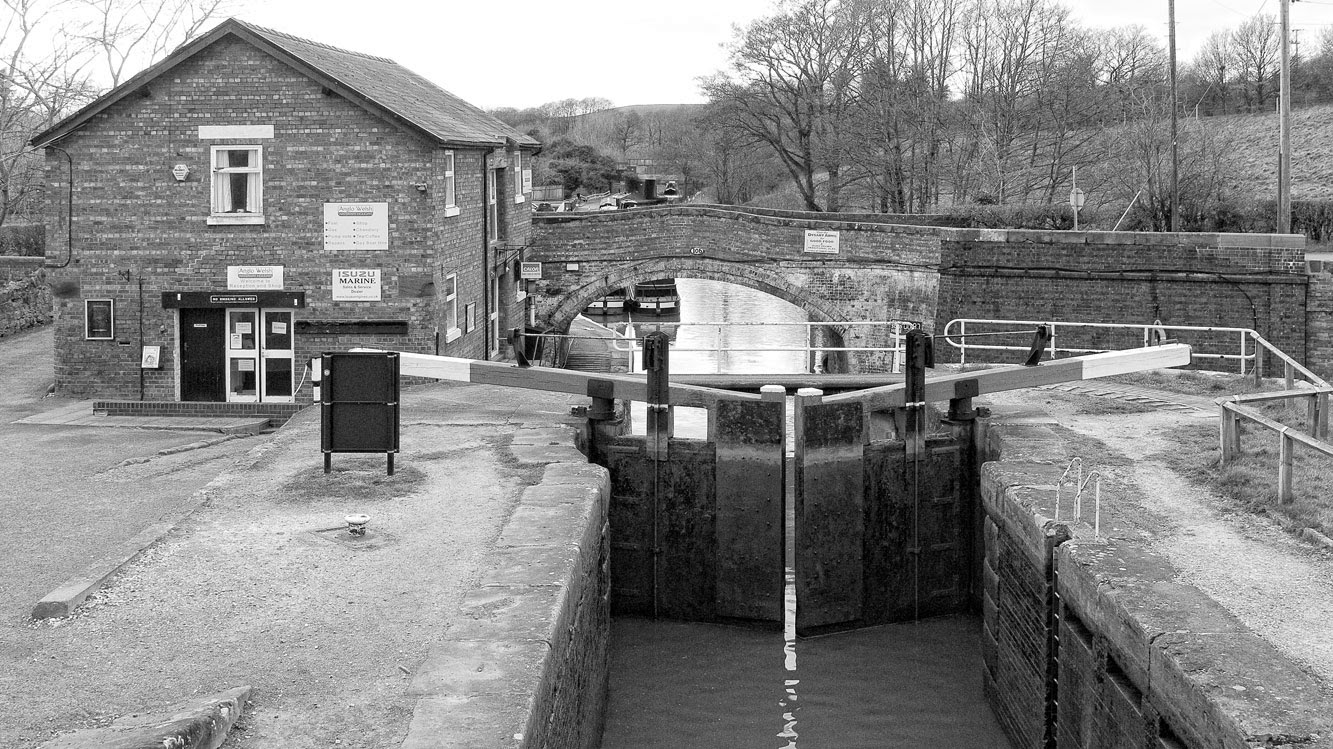 There was a pub in the village, advertised on the sign under the bridge above saying it was ¾ mile away. Slight understatement - more like one and a half miles! Unsurprisingly, it turned out to be one of those restaurant establishments, looking rather too lofty for the likes of us in our comfortable 'boaty' clothes, so we just had a stroll instead and admired the buildings. 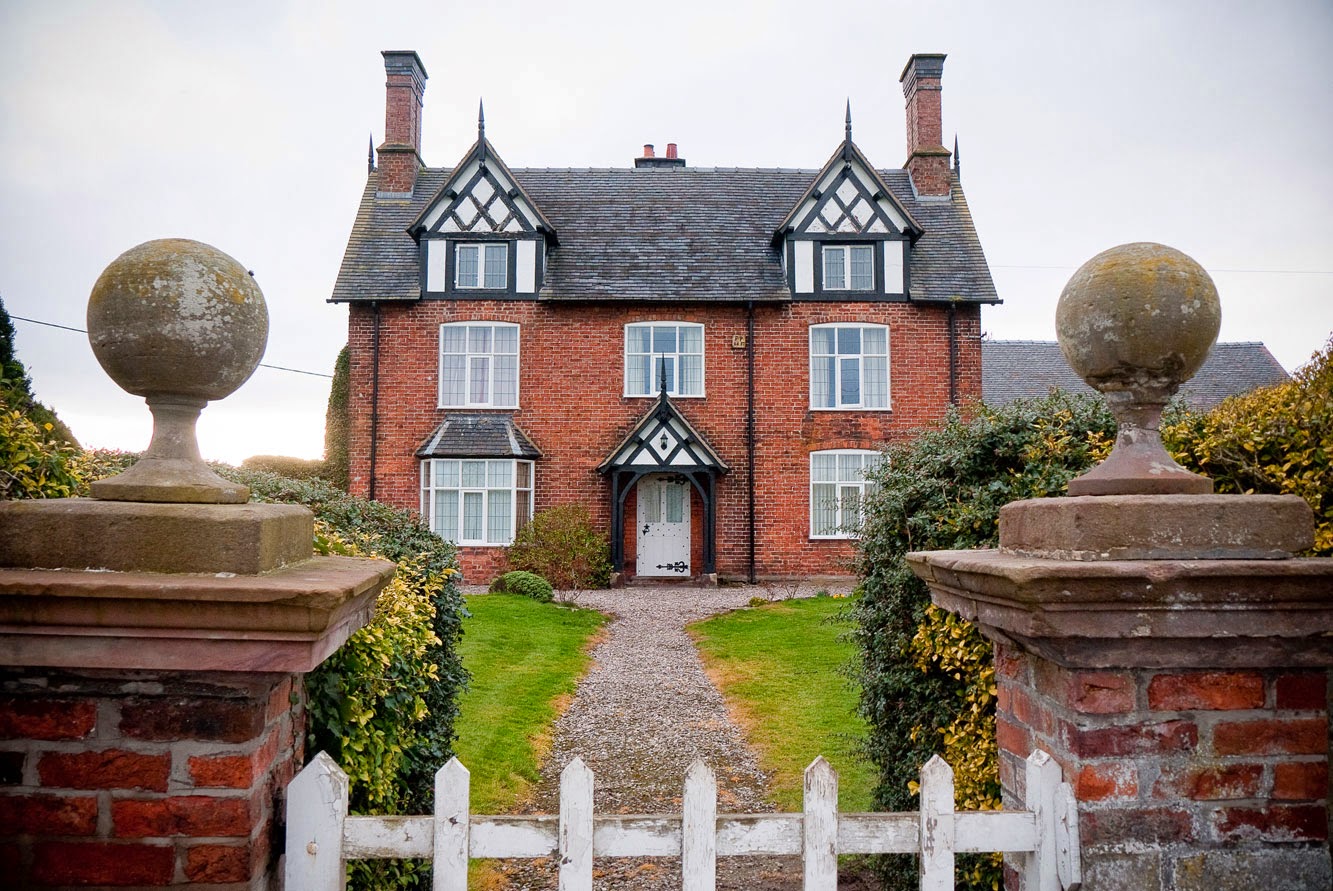 Bunbury appeared to be a very well-to-do village 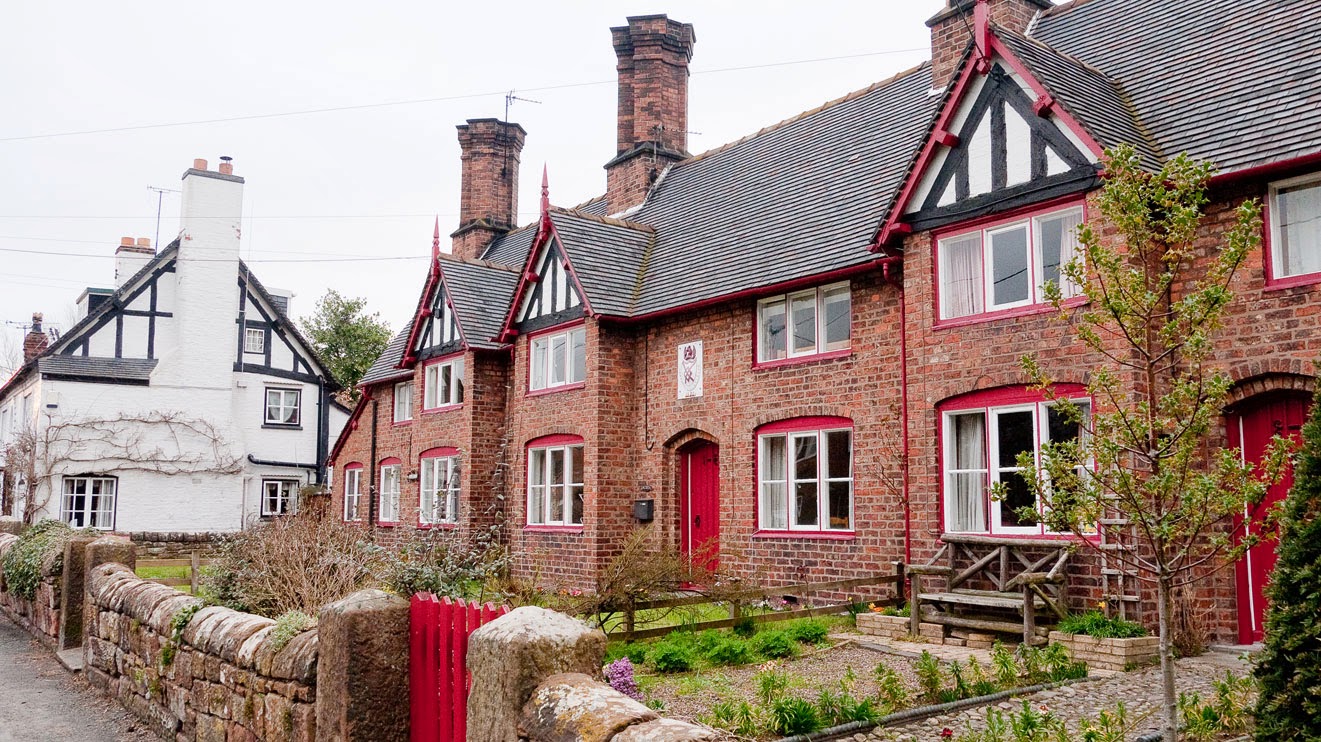 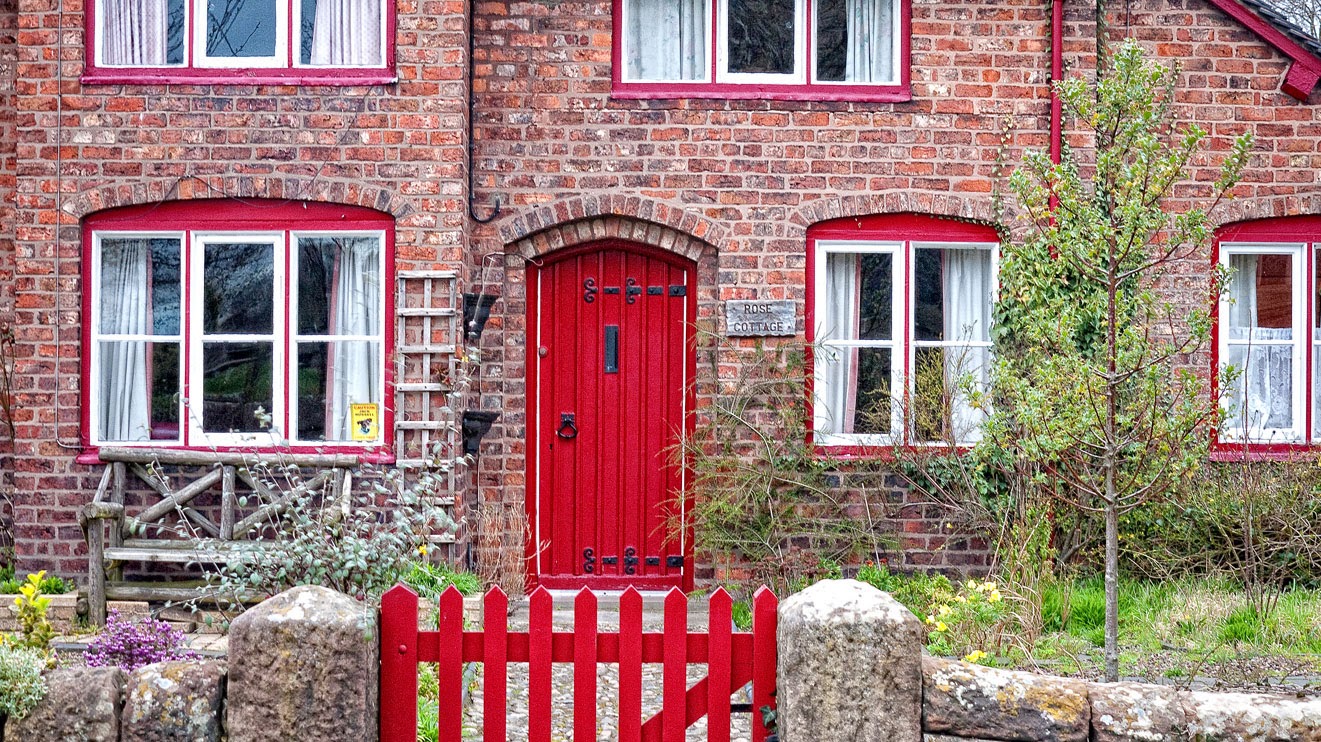 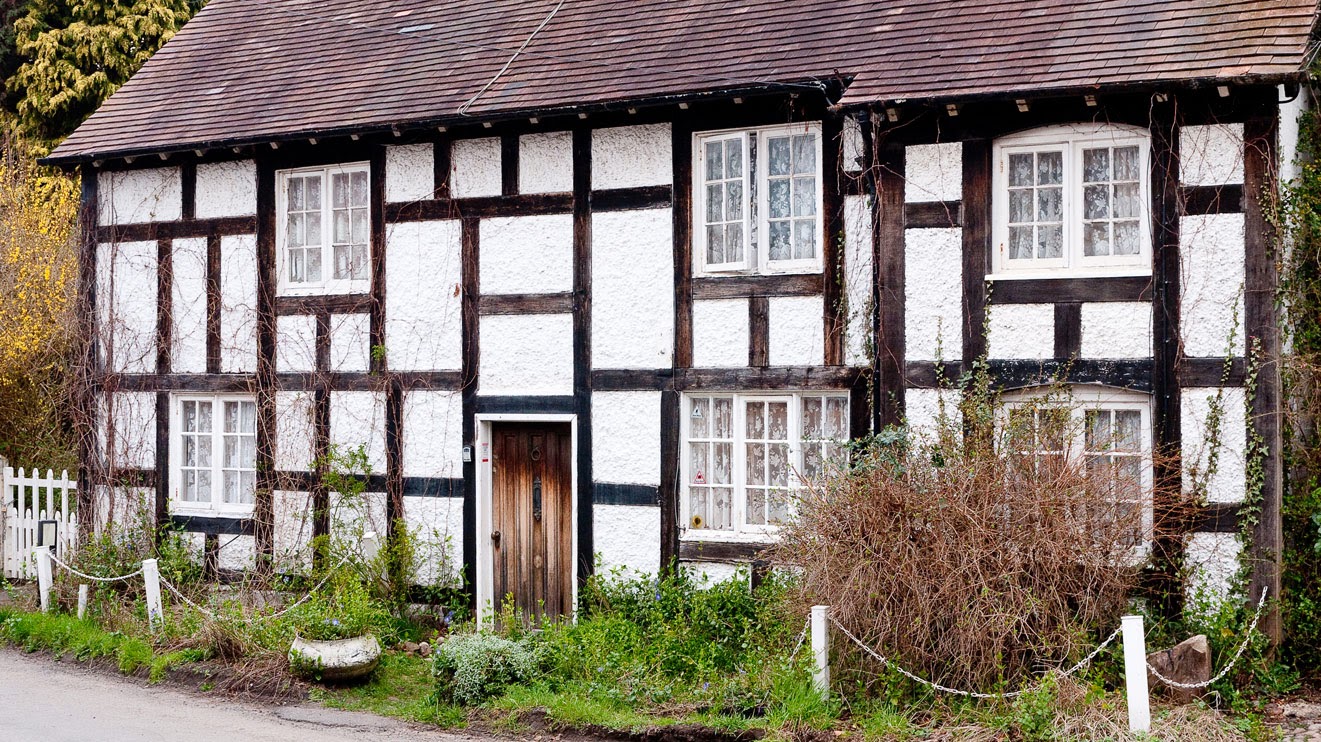 … and black and white cottages


Not a shop in sight though. Ah well, nothing urgent needed. It'll wait.

Monday began as a very wet and cool morning, not in the least enticing for lock-work. However, luckily for us by lunchtime it abated a little, so we set off.

In this staircase, unlike most others, it's possible for two boats to pass from the top to the bottom lock - or vice versa. In fact last August, we did it with two of us in the top lock and one in the bottom which was an interesting concept, but seemed to work just fine!

This time, we did the 'Bunbury shuffle' with one other boat - very smoothly. 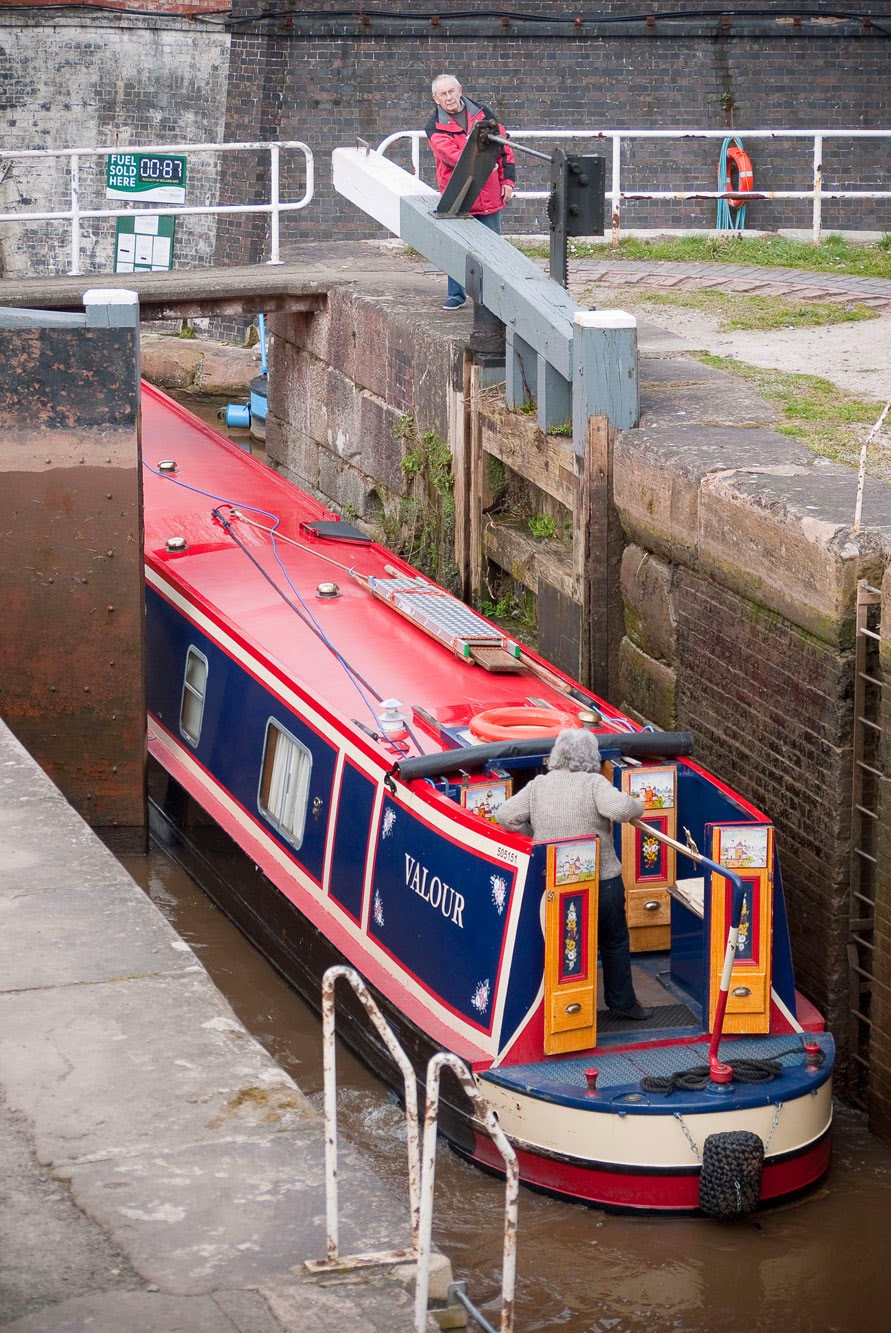 Barry drove again. I got more exercise and simultaneously listened to a one and a half hour webinar on coaching ethics through my iPhone and headphones! What a great way to work - while you walk. The wonders of modern technology never cease to amaze me. 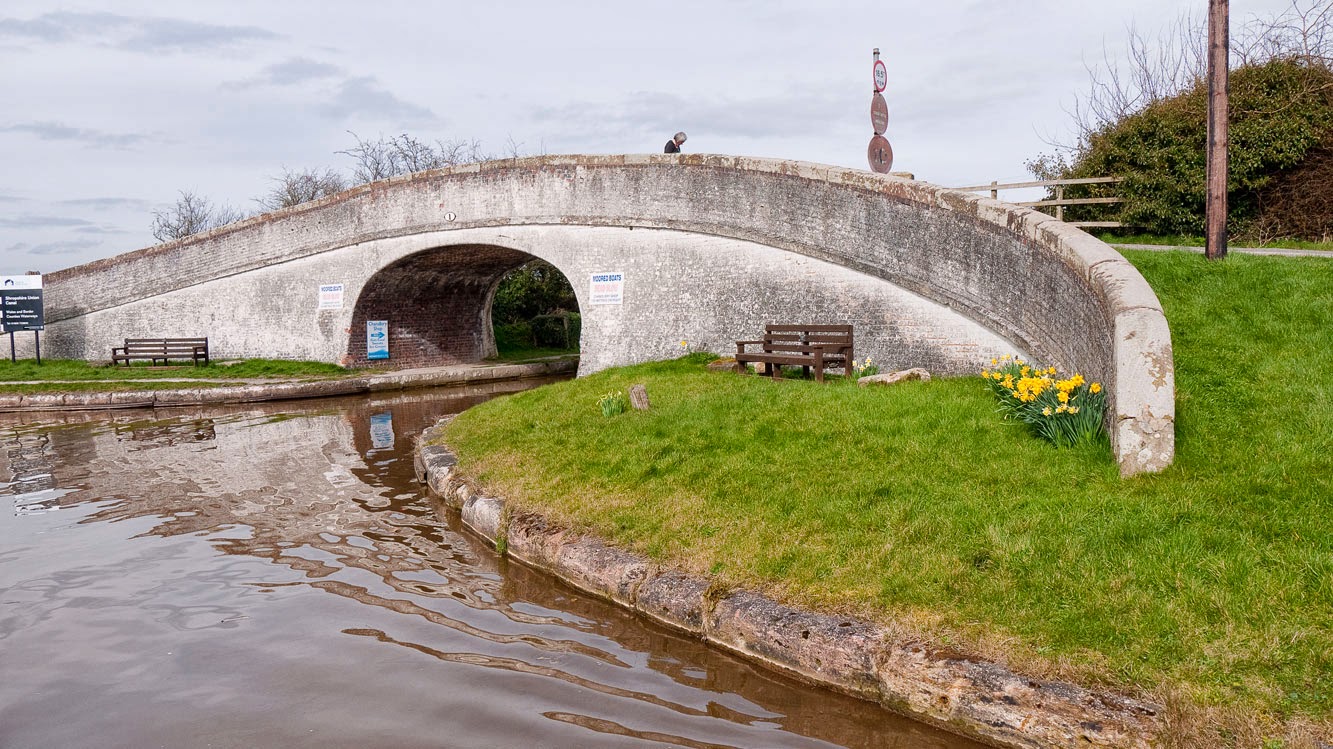 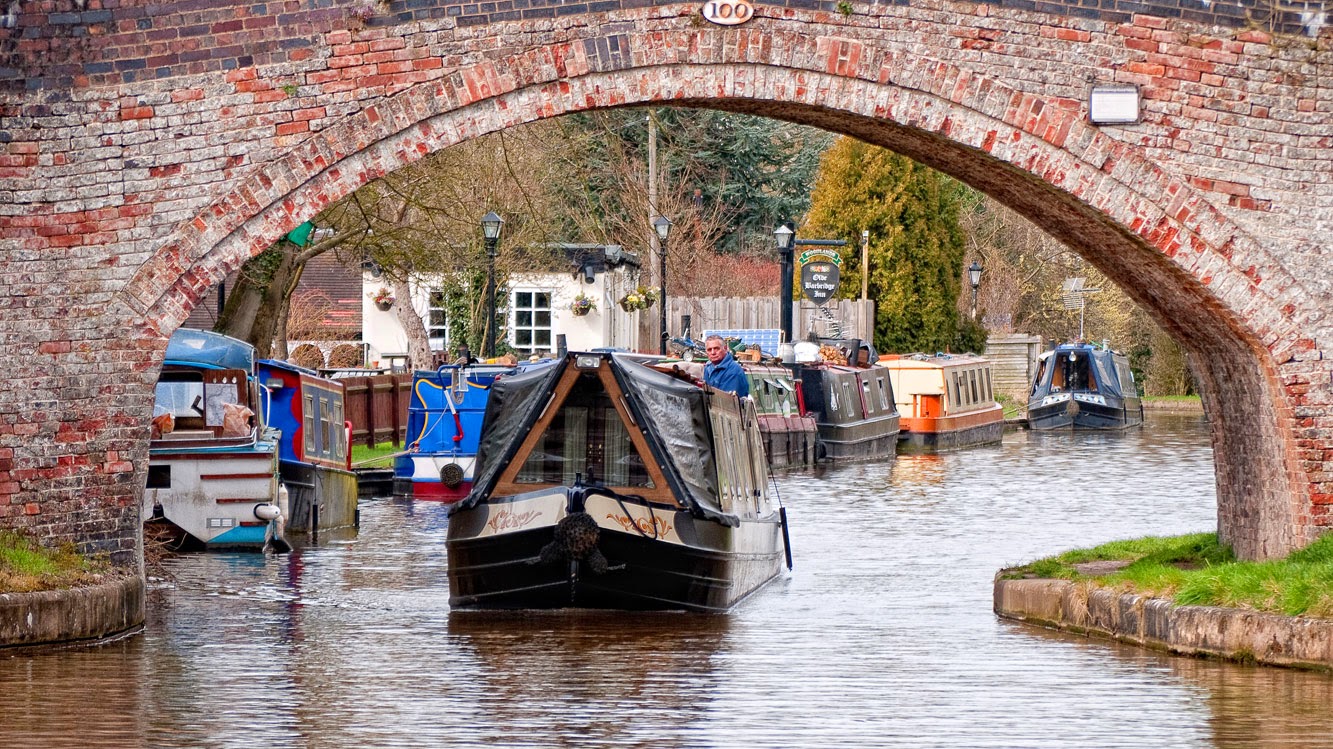 We travelled as far as Nantwich, mooring on the embankment there. Apparently the ground here, when it was first built (by hand of course), was unstable, delaying the opening. At that time, the canal from Nantwich to Autherley Junction was called the 'Liverpool and Birmingham Junction Canal'. Thomas Telford, who designed the new 'fast route' (hard to believe nowadays isn't it?), sadly died before its 1835 beginning. 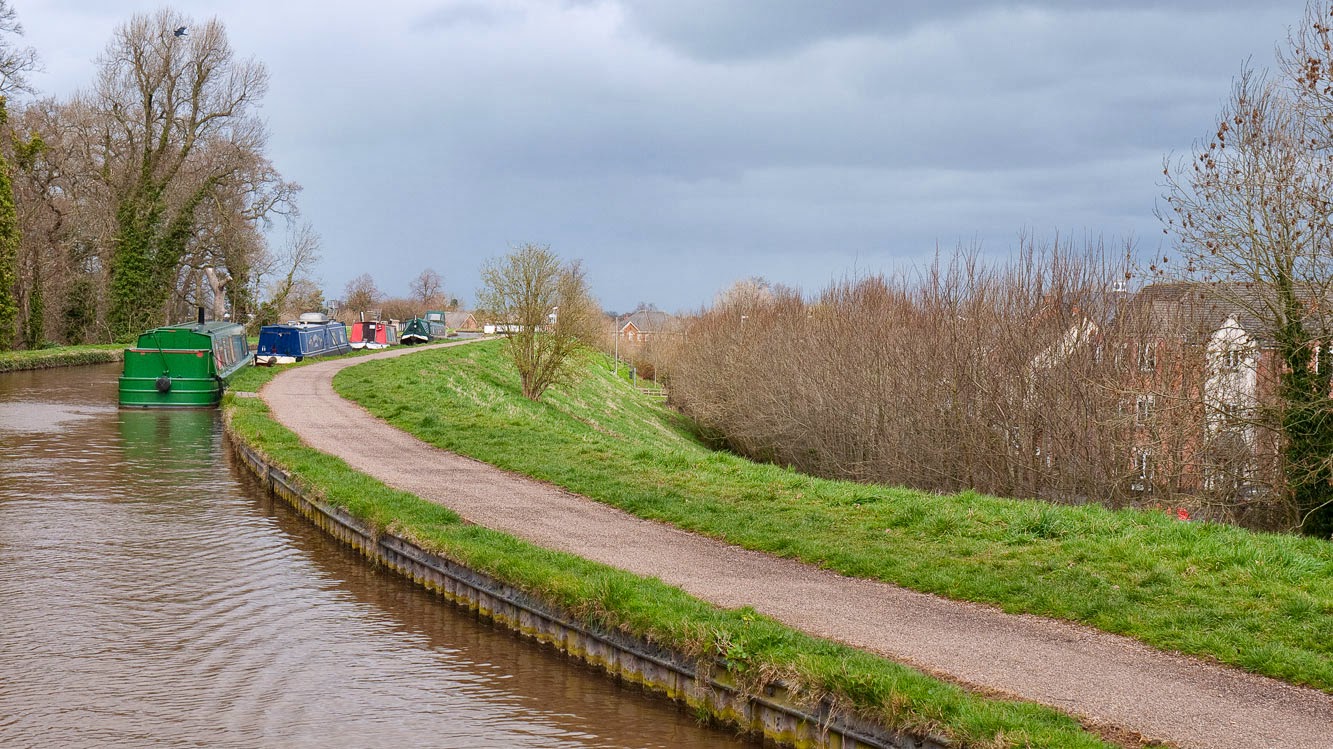 Still needing a few groceries, we took the opportunity for some more fresh air and exercise, and walked into the town. We'd not stopped here last time we passed by in 2009.

Crossing the river Weaver, it soon became apparent that this was a very fine town. Unfortunately, Barry had used all the battery up on his camera, so only had his phone on him to capture the black and white timbered buildings, many dating back to 1684. There was a great fire in Nantwich in December 1583, which sadly destroyed many structures. Being re-built, they've managed to remain extremely sturdy - or at least they appear to be. 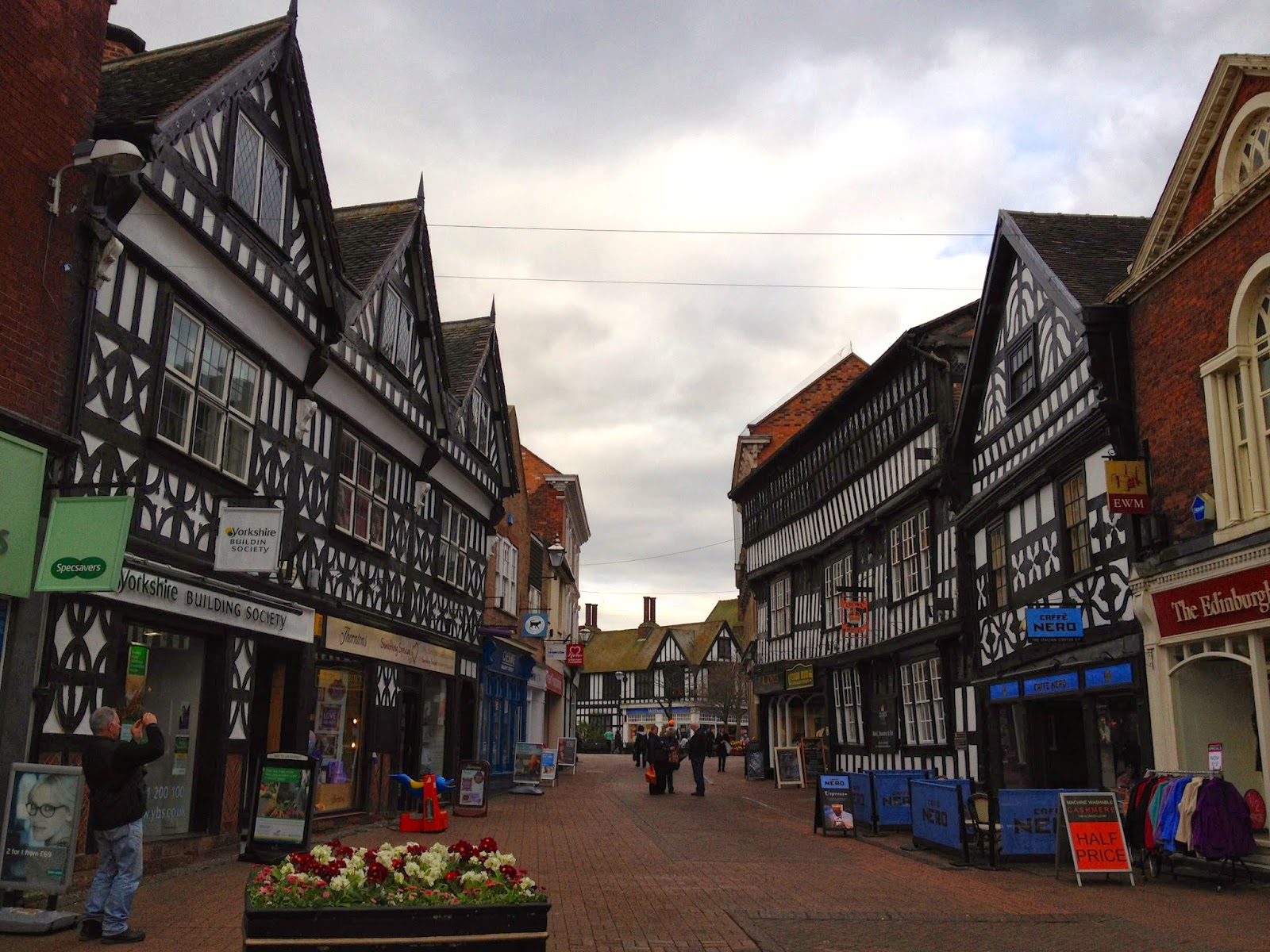 Barry takes some shots on his phone - though he's not been able to get them off it yet! You'll have to make do with mine 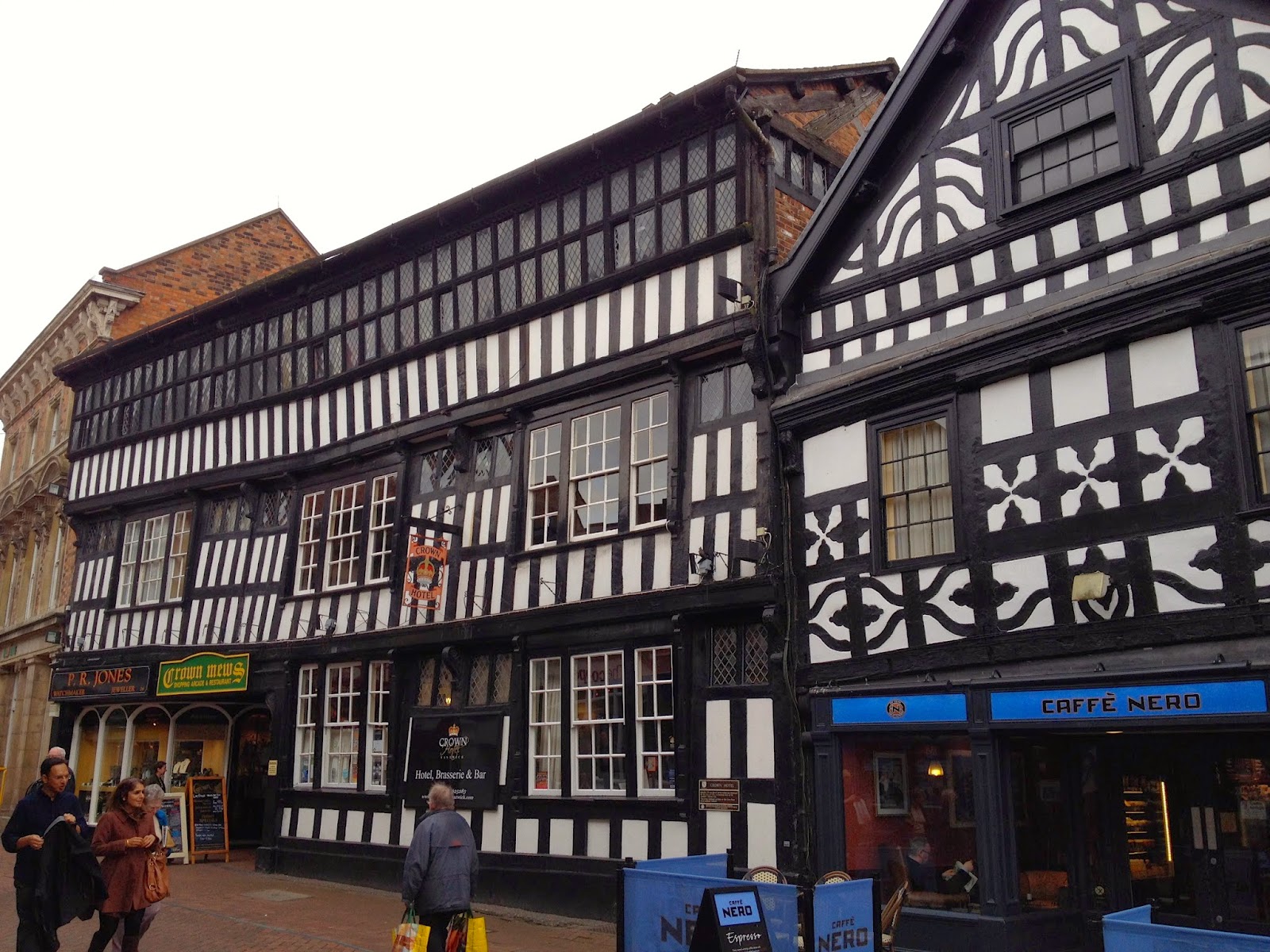 Still standing - but a looking a tad wonky!

A short distance from the centre, we found a huge Morrisons store. I literally had only a few items on my shopping list, but decided to grasp the chance to fill the freezer and fridge while the opportunity presented itself. I ended up spending £85 - good job I took a few sturdy bags with us.

I'm off to London for a few days with my eldest sister, early next week, so I won't have to shop now before I leave Barry boat-alone - again!
Posted by Barry and Sandra