Through the East End to the River Lee, and the dark delights of Tottenham Hale

Today we're heading back onto the Grand Union from Aylesbury, towards a place called 'Slapton' - there's some funny place names around here!  There's also an awful lot of locks ...

Firstly, here's a few more photos from the tidal Thames trip that Barry forgot to put on yesterday's blog (obviously taken by Sandra!!) ... 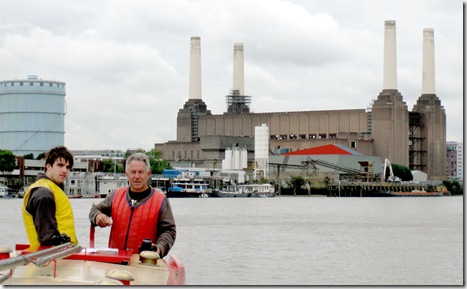 The boys at Battersea 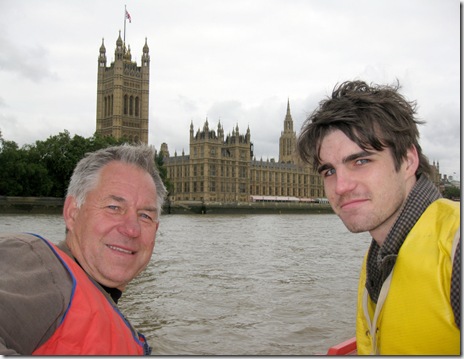 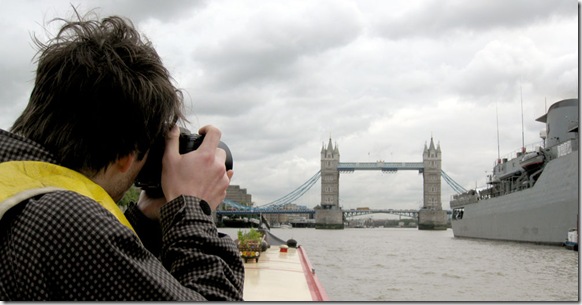 Tom hardly put his camera down the whole trip bless him! 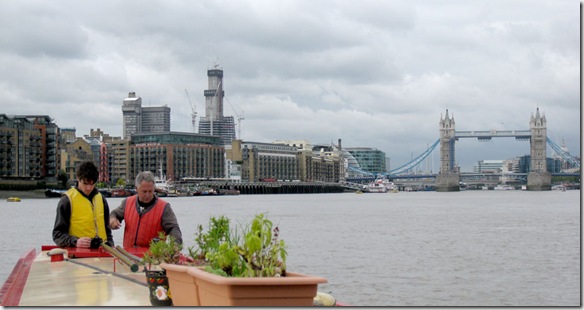 Err, actually at this stage you're supposed to be concentrating on manoeuvring into Limehouse Lock!!!

We weren't sure which route to take, but soon decided on the right turning up towards the River Lee - with the challenge of finding somewhere 'safe' to moor accessible to a tube station for me to catch the train to Euston on Friday, for a weekend in Birmingham with my sisters and girlfriends.

After a short lunch stop along Limehouse Cut to fill up with water, the sun came out and with it a touch of blue sky - how different the photos would have been of the tideway in such light.  We really didn't do justice to the delights of central London in the grey and dismal clouds, however it was probably more realistic of British weather! 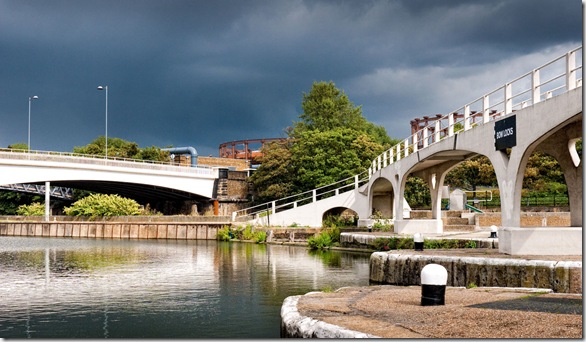 A dark and gloomy sky above didn't bode well with the dismal surroundings ... 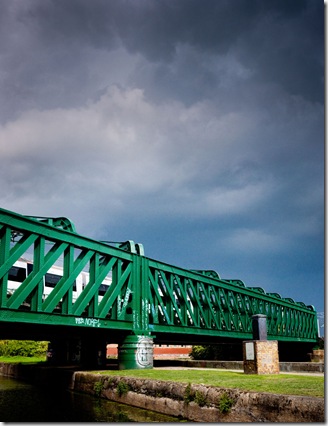 but Barry managed to make it look bright and cheerful regardless!

What an array of building designs! 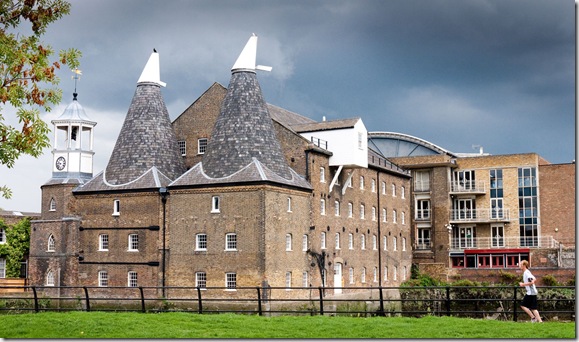 The stunning building of the 'Three Mills' at Bow 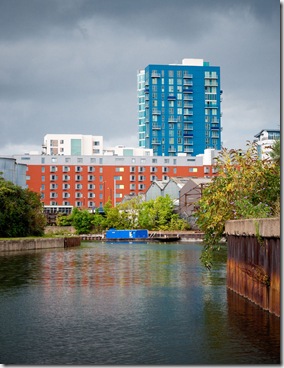 If you can't have blue sky have a blue skyscraper! 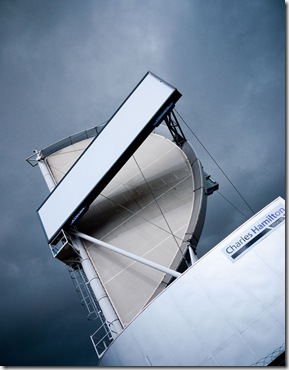 Not sure what this contraption is, though I think it's some sort of electronic signage 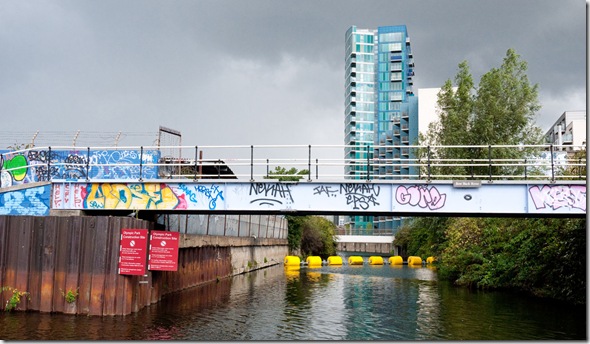 This arm is closed off for the foreseeable future as it's the site of the 2012 London Olympic Stadium - they have a bit of a job ahead cleaning up the graffiti ... 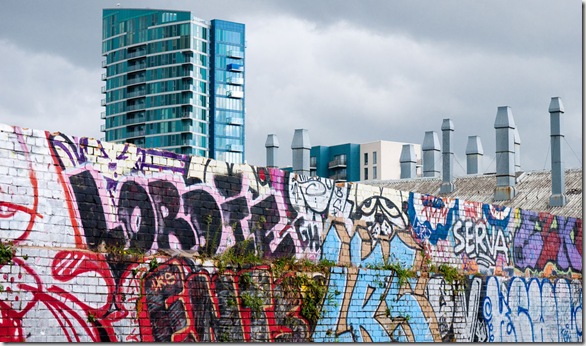 but realistically the colourful graffiti does improve the area somehow - though sadly no Banksy! 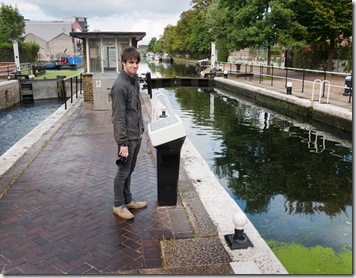 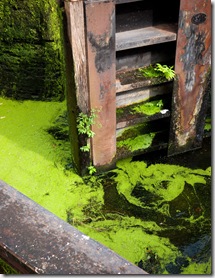 Part manual, part mechanical locks - and a lot of green slime on the canal which doesn't look too salubrious! 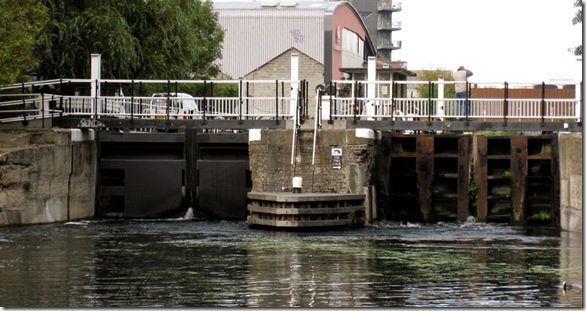 Which lock shall we enter?? 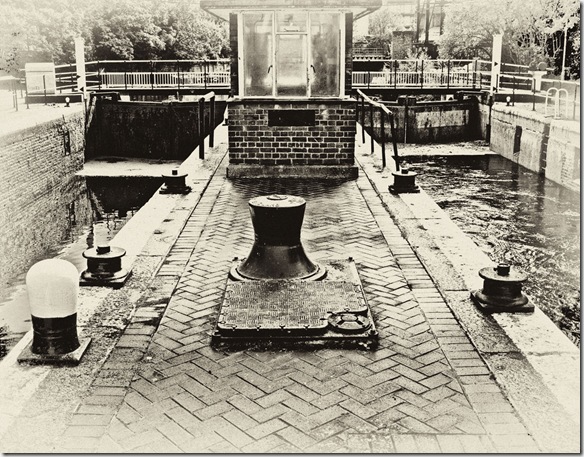 Must've been some big boats passing through here many years ago 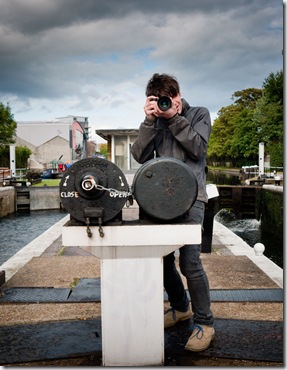 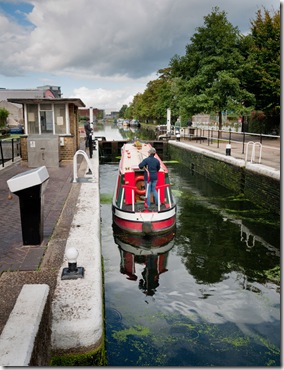 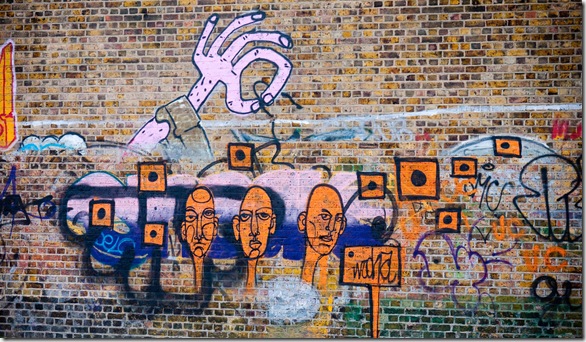 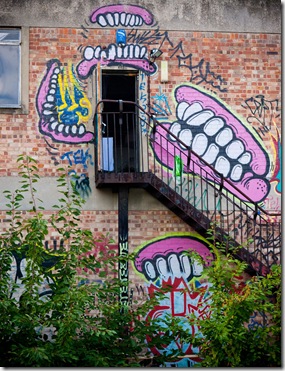 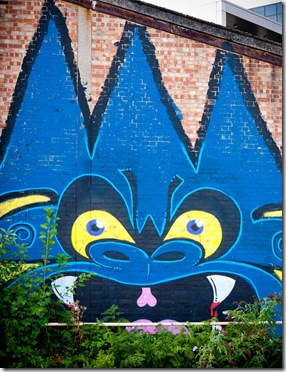 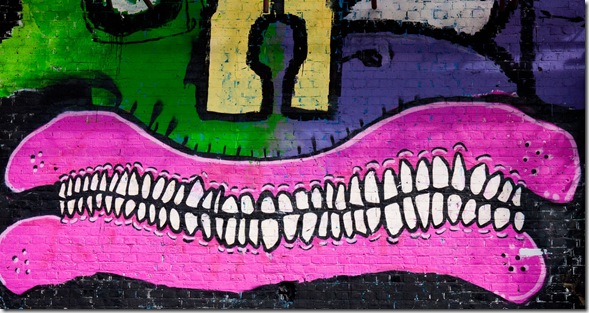 The emerging shell of the Olympic Stadium - pretty impressive!

We continued through the East End and onto the River Lea (which can be spelt Lea or Lee it seems!) to Tottenham Hale, where we found the first (what we thought was a) decent mooring and the bonus of a nearby tube station and grocery store. 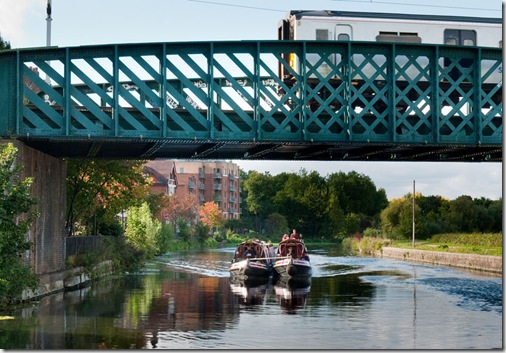 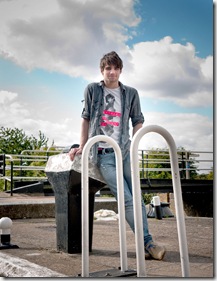 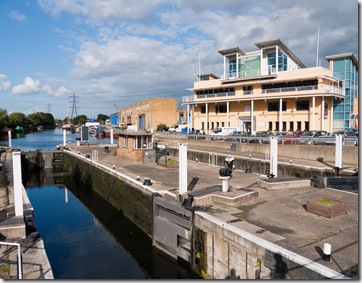 Tom looking cool at Tottenham Hale locks - another double one

Not long after we'd tied up I received a text from Pete, a fellow boater who we'd met up with last year on the Chesterfield Canal.  He asked us where we were, I told him, then about ten minutes later there was a knock on the roof - spookily he was moored just up the cut from us!  It was great to see him and he came on board and shared a few drinks with us while we caught up on his life story since our last meeting (of course he knew ours because of the blog!).

During the evening, around 2200hrs, we felt someone boarding the boat.  Tom had gone to sleep on our bed as he was very tired, so it was just Pete, Barry and I.  We went out of the front of the boat and saw (in silhouette) three black guys in dark hoodies looking menacing - it was extremely hard to see them properly and I would've been scared witless had I been on my own!  Thank goodness there were two hunky men to give them their marching orders!

When confronted they mumbled that we had to open the back up as there were 'stolen goods on board' - yeah right!  More likely they were high on drugs and just looking for a way of breaking into any property to steal what they could to fund their habit.  Barry and Pete engaged them in conversation whilst walking behind them along the towpath, Pete got his phone out and said he had a friend who wanted to chat with them and not long afterwards they were running their little legs off to get away!  Not so stupid after all maybe?!

A horrible experience, but it is seriously the only time we've had any such problems whilst cruising the cut so I count us as very lucky - we'd probably be more likely to have problems on land. 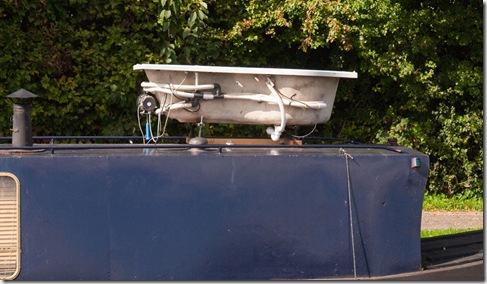 ... and at the end of a long day a spa bath would be very soothing!

Pete said he'd carry up the river with Barry and Tom tomorrow while I'm away, so it's a boys weekend and a girls weekend coming up! 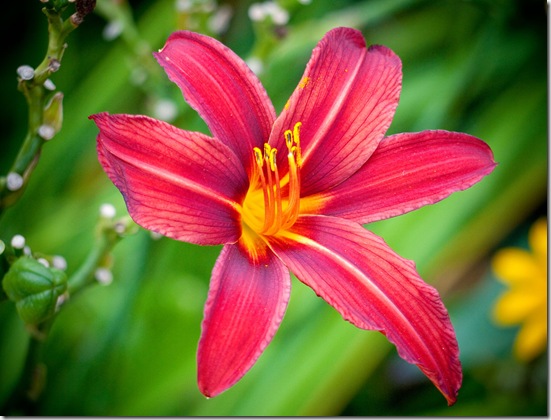 Luckily life has a larger proportion of loveliness than sad hooligans!