The grandeur gets greater and greater - Maidenhead to Windsor

We left Rickmansworth late morning and cruised about five miles and five locks to Hunton Bridge, on the outskirts of Abbots Langley.  Thankfully the previously unremitting cold and damp was replaced today by large patches of blue sky and warm sunshine - bliss!  The journey was also coloured by beautiful things along the way, but you'll have to wait a few weeks for the photos to appreciate them, sorry!

Around 0830hrs this morning, what seems to be the standard time, there was a loud knocking on the outside of the boat as the council collector came for his dues - no free mooring here then!

Although Maidenhead didn't impress us much, along the riverside on the outskirts, probably more towards the town of Bray, there were homes to die for!  In fact, some were so staggeringly opulent that we even turned the boat around to go back for another look!  Barry had been below deck working on the blog, but soon realised that wasn't the most productive use of his time when there were such amazing sights to be photographed.

In one house we thought we saw Phil Collins; there was a drum kit in the annex and a balding man wandering about in his dressing gown.  We waved furiously at him, but for some unknown reason the greeting wasn't returned!   Does anyone know who lives in any of these places?  There's some serious money invested in these well-maintained bricks and mortar.

A selection of some of the palatial residences along the way ... 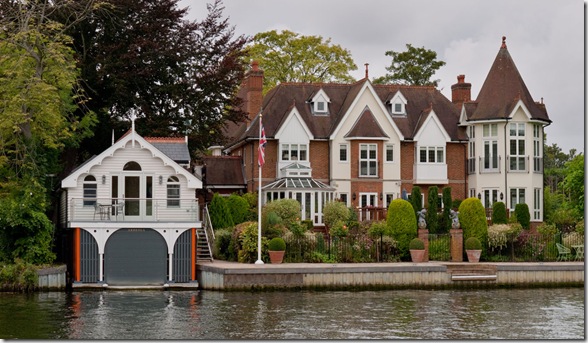 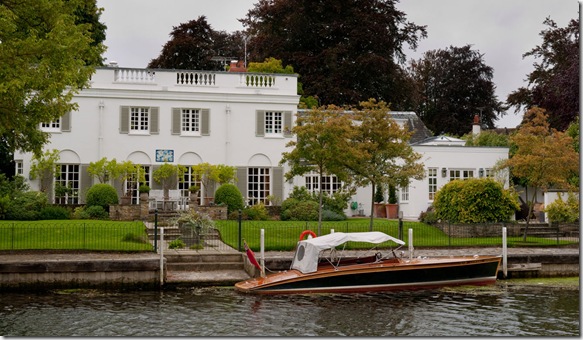 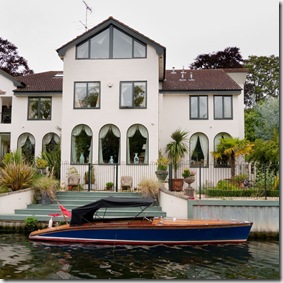 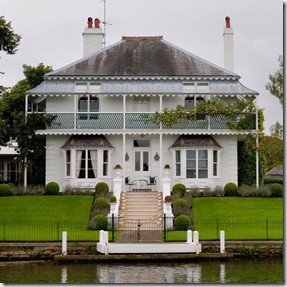 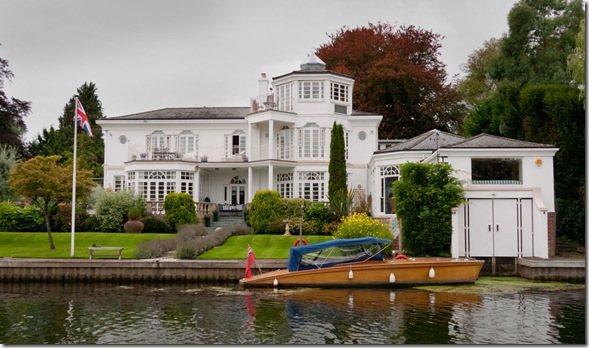 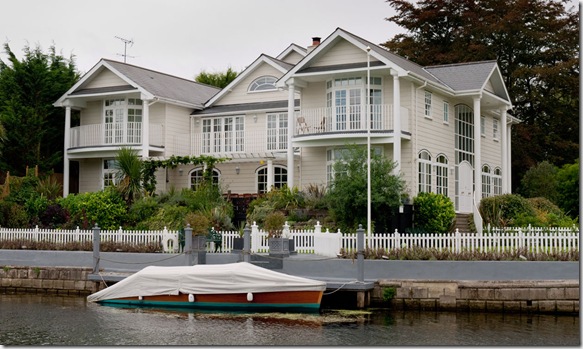 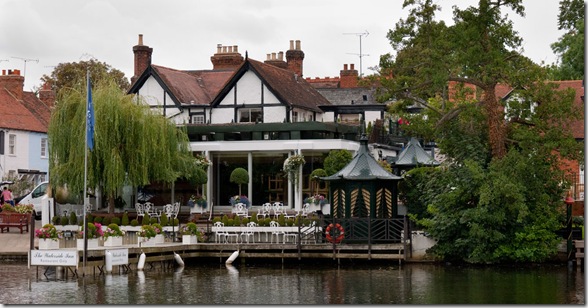 Oh! this one's a restaurant - The Waterside Inn

At Bray Lock the self-service sign was up and once again it was full as we approached, with a large cruiser at the back looking nervously at us - if they'd all shuffled around we'd have fitted in easily but they weren't having a bar of it so we waited patiently.  I wonder if sometimes they do this on purpose, scared that the steel hull of a narrowboat will bang their plastic boat - can't blame them really!  Occasionally we've found the owners a little snooty, but we've also met many friendly cruiser owners with the most approachable being those who used to own narrowboats. 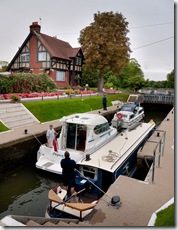 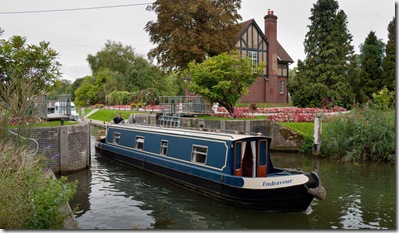 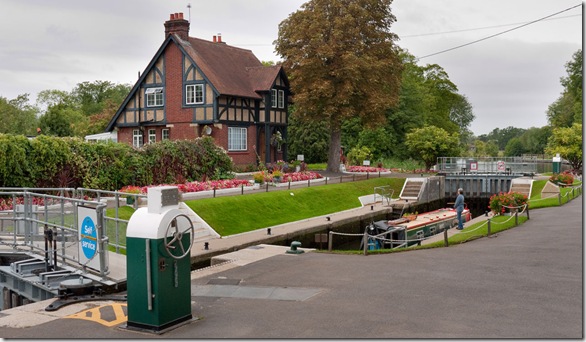 Northern Pride sits alone, but proud, in the lock once it finally gets in! 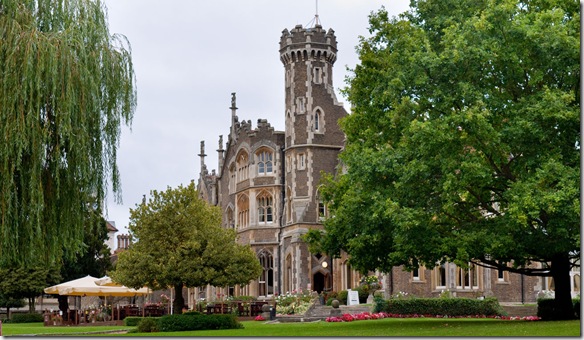 A reception and conference venue par excellence along the way

We stopped at Windsor Marina to fill up with water and diesel and get a pump-out - even though we're not yet full we thought we'd take advantage before Tom comes on board.  It was a very busy place and at one stage a cruiser tied up to us waiting to use their services.  As one would expect this was definitely not the cheapest place for a pump out or diesel - but you become a captive audience on the Thames unless you're near to a lock with a pump out facility so beggars can't be choosers! 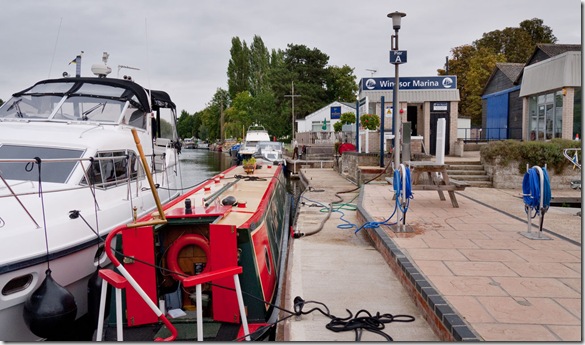 They can be a little oppressive these cruisers!  Lots of fenders down to buffet the knocking

Approaching Windsor, the very impressive Wheel and Castle dominate the skyline.  Windsor Castle has been the home of British Monarchs since the 11th century, and is the oldest inhabited castle in the world.  It's purportedly a favourite residence of Queen Elizabeth, spending most of her private weekends there, and one assumed that as the flag was flying she must've been in residence.

We moored opposite The Royal Windsor Wheel, which we discovered is only open from 1 May to 19 September - phew, we just crept in before it closes for the winter!  I went up the wheel two years ago when I was on holiday visiting a friend who lives nearby, you get a tremendous view of the castle and London during the ride.

The advertised mooring fee was £6 a night, which was worth every penny to spend a night in such an impressive location.  Certainly it's far better value than the £8 we had to pay in Maidenhead - it doesn't make sense!  This time we were paying our dues to Eton College no less, who own the land, and they came to collect the fee in the evening. 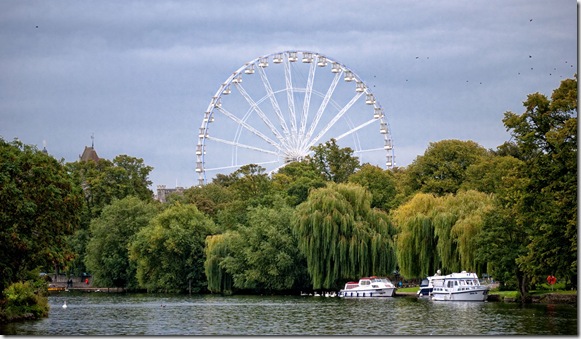 The first sight of Royal Windsor is the wheel on the sky line ... 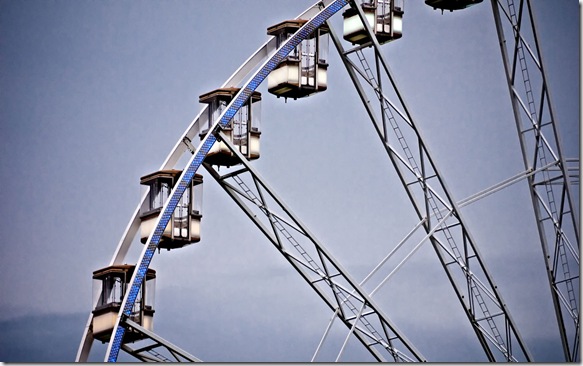 Smaller carriages than the London Eye, but infinitely more intimate 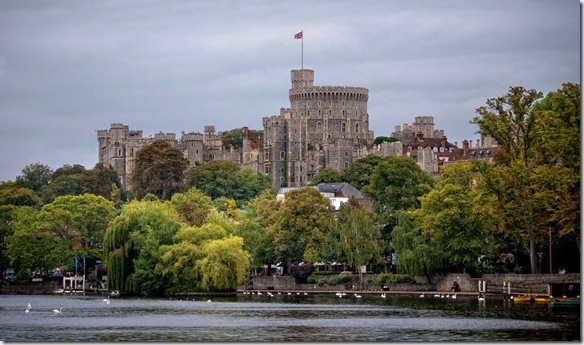 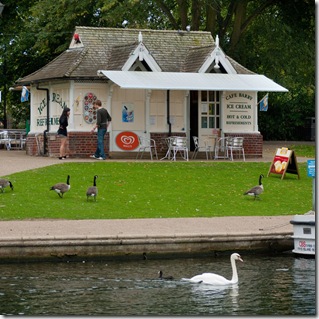 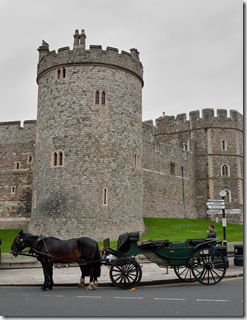 Courting by the ice cream kiosk; and a dashing horse-drawn carriage awaits a lucky couple

Walking into Windsor to the station so that Barry could get the train into Paddington to meet with Jamie and Tom, we discovered that the legendary 'Changing of the Guard' ceremony is only held on alternate days from August to March, and as it doesn't take place on Sundays' we wouldn't be in luck - what a shame.

We had to leave on Tuesday as we have an appointment with the tide at Teddington Lock early in the morning in order to negotiate the tidal Thames on Thursday.  I'm travelling up to Sutton Coldfield for the weekend, catching the train from Euston on Friday at 1246hrs.  It's a real shame to rush this section of the Thames, but we've been dawdling lots this trip and it has to catch up with us sometime! 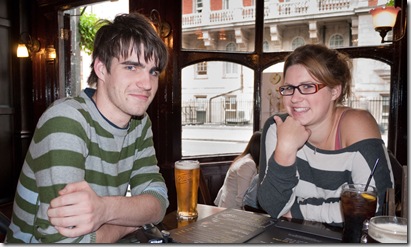 Tom and Jamie enjoying a drink or two 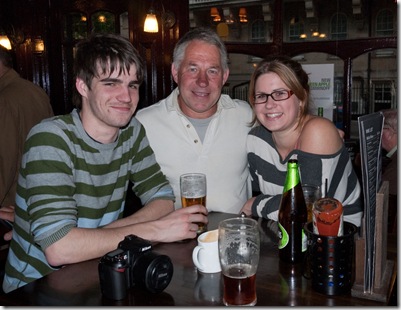 Tom, Barry and Jamie, a rare and precious family gathering

When Barry and Tom returned I'd discovered from a leaflet that there was a 'two-for-the-price-of-one' offer on the Windsor Wheel on Monday's, so suggested they take the opportunity to go for a ride.  As (bad) luck would have it however, when they got back from London just after 2000hrs, the silhouetted lights on the Wheel changed from white to multi-coloured, and not long after they left the boat they all turned off!  The leaflet only covered the period to 31 August so we'd missed our chance once again - by 13 days!

Ah well, it's out of high season now, which means there's a lot less traffic on the water and consequently more availability of moorings, so you can't have everything. 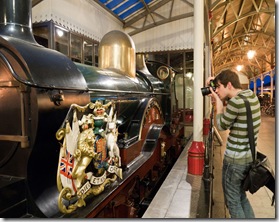 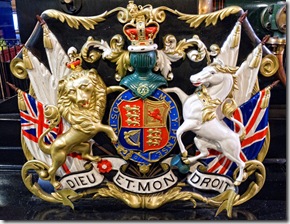 The night-time walk back to the boat along the river 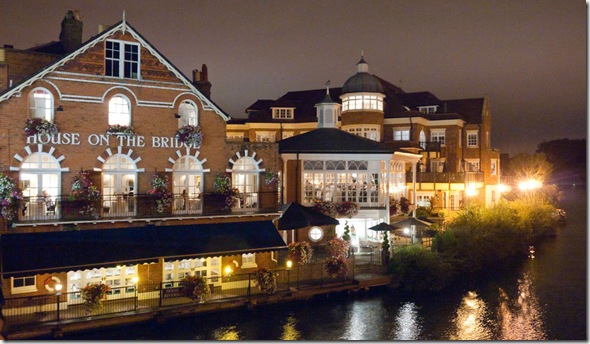 They make the most of the riverside here 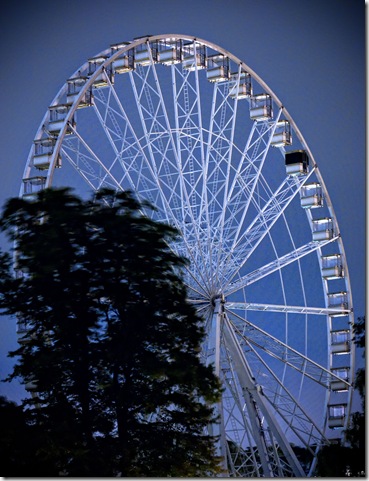 One of the carriages (presumably the darkened one) is a private booth - £40 for up to 6 people (not bad considering it's £6.75 for one adult!) 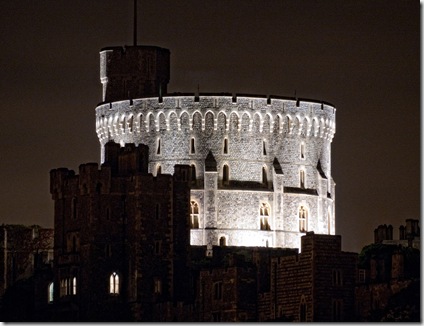 The Round Tower is gloriously illuminated at night

It was great to see Tom, but understandably he was still quite jet-lagged (especially as he'd been out on the town with his big sister the previous night!), so we all had an early night as it's difficult to stay up when your guest is sleeping in the dining room/lounge!

Tomorrow we'll visit Windsor Castle, expensive as the entrance fee is it's an opportunity not to be missed.  We'll attempt to set off by lunchtime as the receipt suggests that we'd only paid from 12md to 12md, whatever time you actually arrive - I'm not paying another £8 to Eton College! 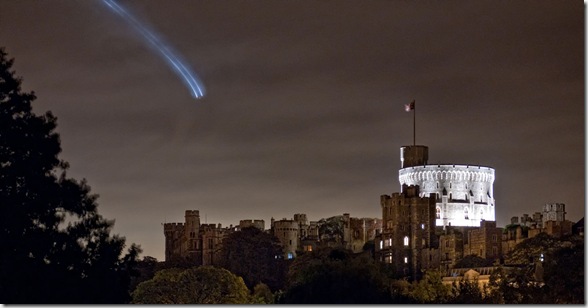 Could it be an Al-Qaida or a UFO attack on Windsor Castle - luckily repelled at the last moment or there'd be little for us to view in the morning ...