All the H's today - Henley & Hurley (sadly we missed Hambleden where they film Midsomer Murders!)

Today we finally left Paddington Basin, heading west towards Slough (or 'Sloff' as Barry calls it!).

We had a rude awakening this morning with a loud knock at 0830hrs for the night's rent.  Now that may not sound terribly early, especially to those poor souls who have jobs, but when you didn't get to bed until the early hours it certainly felt like it!  We parted with £6 pounds for our overnight stay, which was cheaper than other moorings we'd looked at yesterday but still painful when you've already paid £93.50 for the 'privilege' of a week on the Thames!  We'd had no problem finding somewhere in Henley, having been told it'd be a challenge - probably because it's not high season anymore.

Our view across the Thames - oh how the other bank live! 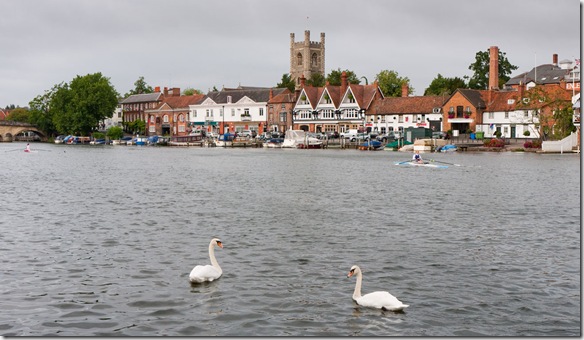 Despite our early awakening, we had a slow start to the day's travel as there was a leaking sink to be repaired.  So Jill and I left Barry to it and took a trip to the shops.

Unsurprisingly the town contains many designer shops, and Jill bought a very stylish dress from Phase Eight as it was 25% off.  It was a classic 'shift' dress which will last for years, it's good to buy high  quality clothes every now and again rather than the 'throw away fashion' of today .  Jill reckons that someone, somewhere is surely being exploited to be able to sell the stuff they do at places like Primark for such a price.  However, it's suggested on Primark's website that it's an ethical trader with qualities and values reflecting fairness; so maybe it's OK?

More sensibly we visited Waitrose for a few bits (how I adore the delicious/fresh looking food in this store!).  Henley is definitely an attractive town, teeming with very wealthy looking people, and, like most places some of them were friendly and some rude, but it wasn't nearly as pretentious as I'd imagined Henley would be. 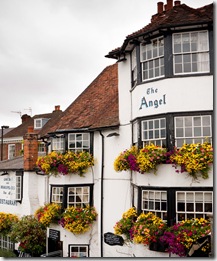 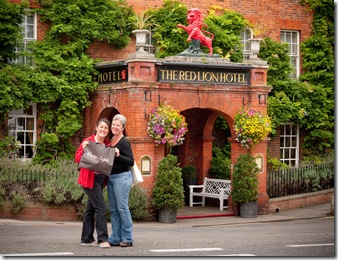 The 'The Angel' on the river, 'The Red Lion Hotel', and Jill and Sandra with a little purchase from the rather expensive 'Phase Eight' store 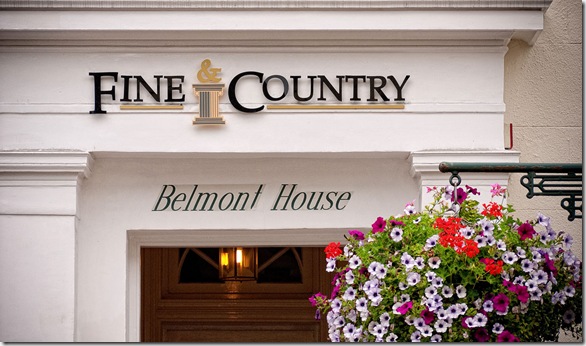 It's all very nice and a bit posh around these parts 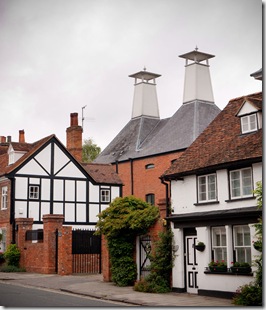 The old brewery building in Henley, now apartments (or something!)

One of 'The Henley Show' banners around the town 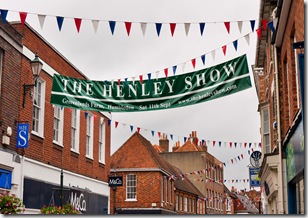 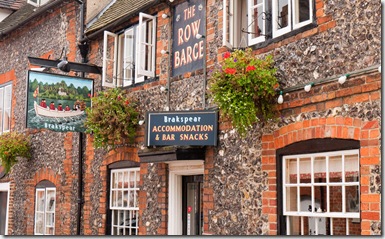 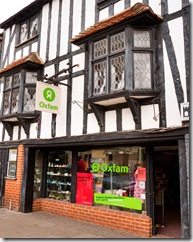 'The Row Barge' pub from Thursday night's escapades ...  and the Oxfam shop (no comment about bags left on doors Jill!)

The fields where the 'Henley Royal Regatta' is hosted at the end of June each year, with Northern Pride moored in the distance 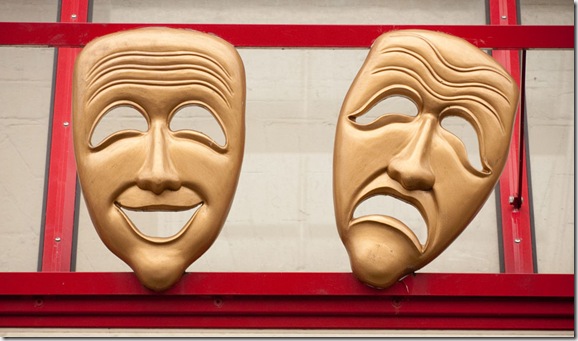 An impression of the crew from last night to this morning

Looking back towards the bridge

We'd arranged to meet up with some friends of Barry's at Hurley around 1900hrs this evening, and eventually got started to our destination.  As we were so delayed, we sadly didn't get to stop at Hambleden to check out the Midsomer Murders location.

More amazing riverside homes followed, leaving us once more gasping incredulously at the amount of money there is around in some parts of the country ... 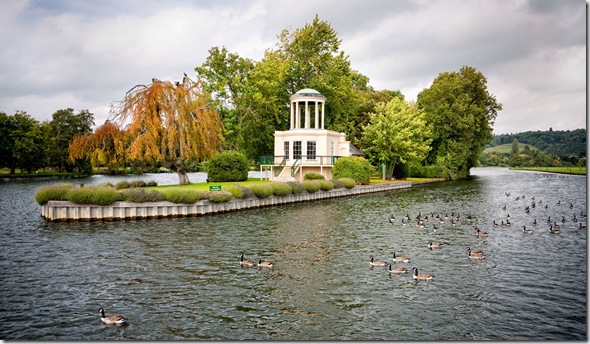 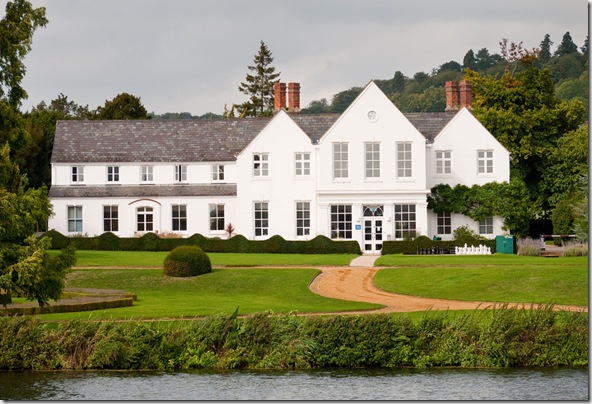 Looks like a very private resort, but it's the 'Henley Business School' 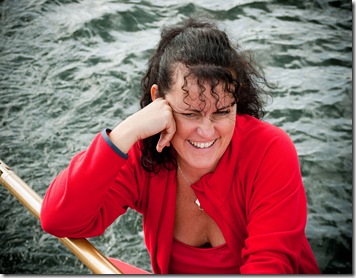 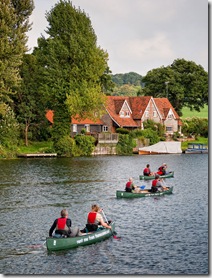 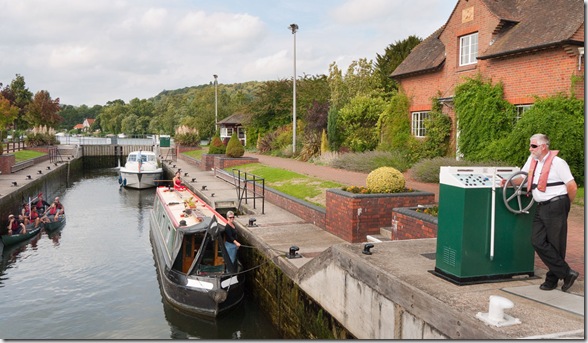 Hambleden Lock - one of the two locks we passed through today

The old weather-boarded mill by the weir, now swanky apartments

Medmenham Abbey, converted into a home of various styles, which was the meeting place of the infamous 'Hellfire Club'

Through Hurley Lock to find a mooring close to Jane and Mick's caravan Park (or so we thought!) 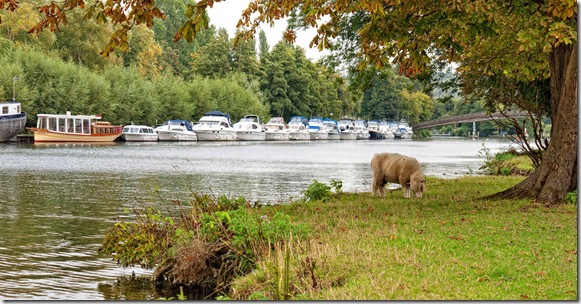 Found a pleasant one beside a paddock full of sheep 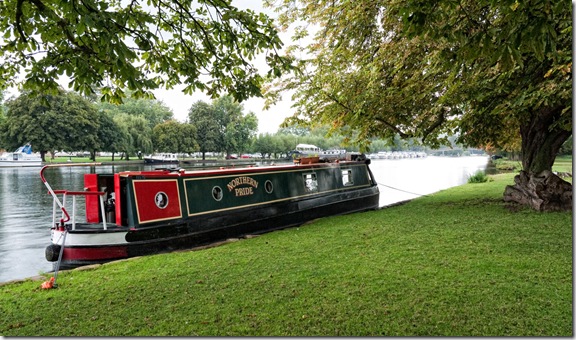 Very tranquil, though you had to watch where you trod

Once moored up close to what we believed was the caravan park where Jane and Mick had their caravan, we went for a stroll to the Georgian town of Marlow ... 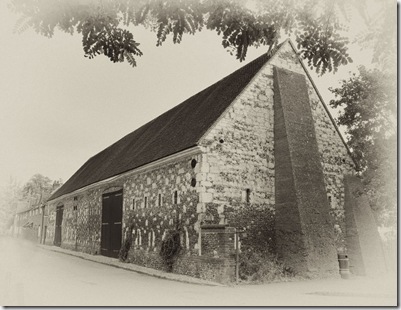 The old Tithing barn in Hurley 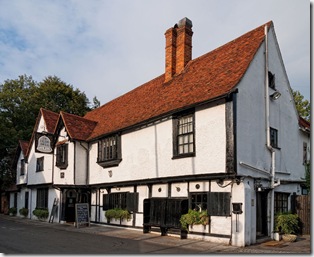 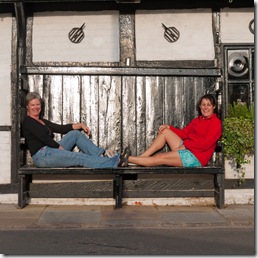 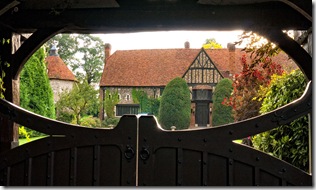 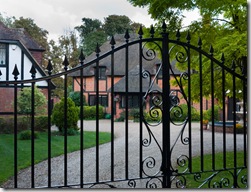 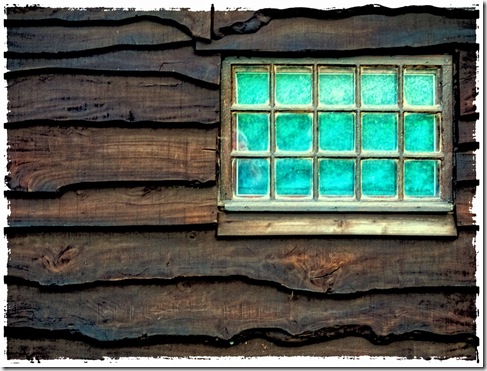 An rather delightful old wooden building

Marlow appeared to be another extremely affluent place, but also has two holiday caravan parks on either side.  Due to some misunderstandings in text communication between Jane and I, we'd moored nearby the wrong one, so Mick came and picked us up from the boat after dinner to spend an evening with them.

They've had their caravan for many years and spend most weekends there as it's only a short journey from their home in Borehamwood.  They have a fabulous outside area with a gas heater and barbeque where we enjoyed a liquid, nibbles and fun filled evening.  Another late night to contend with!

Tomorrow Jill leaves us and Kim and Joe arrive for a short visit ... 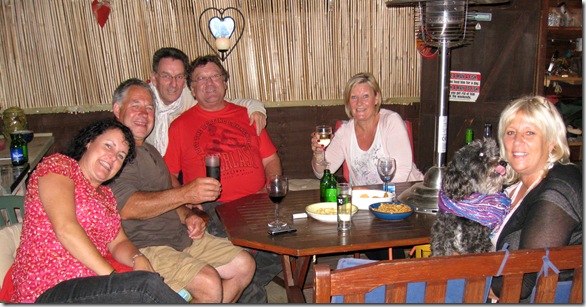 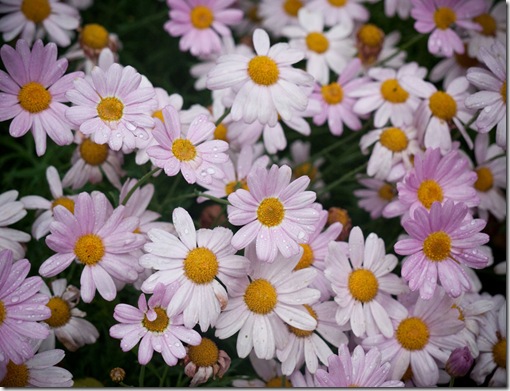