Magnificent Marlow - finally getting the right glasses and swapping guests

Yesterday we bypassed the 'Sloff' Arm, unable to justify wasting diesel visiting somewhere we couldn't imagine was terribly enthralling (or did we miss something amazing?).  Early afternoon, after a miserable day weather (and most of the scenery) wise, we moored at South Harefield, just before Widewater Lock.  We're heading for Hemel Hempstead by Friday, so taking our time while we still have it to while away ...

Barry's son Tom commenced his journey from Wellington this morning, spookily on 9/11!  We had an early phone call from him, so were reassured that all was going to plan ...

Leaving Hurley late morning, we pottered along the river a short way to relish the delights of Marlow, another charming Georgian town skirting the Thames. 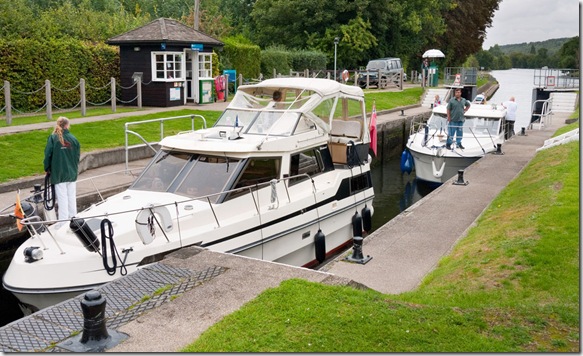 Only one lock today, Temple Lock, not too far from Hurley 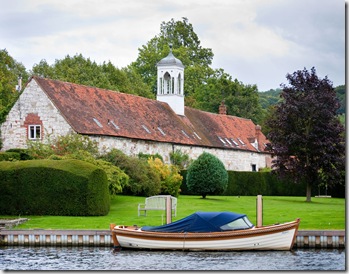 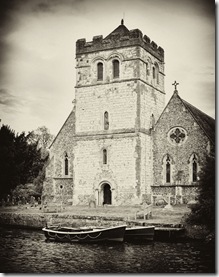 Bisham Abbey, now a sports centre; and the church beside the Thames at Bisham 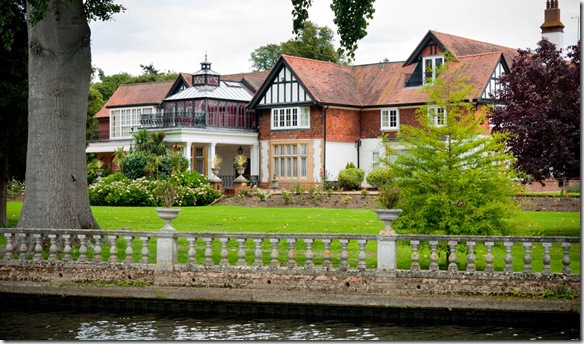 To give you an idea of the size of this property, there must've been at least 50 of these stone pot plant holders along the river wall! 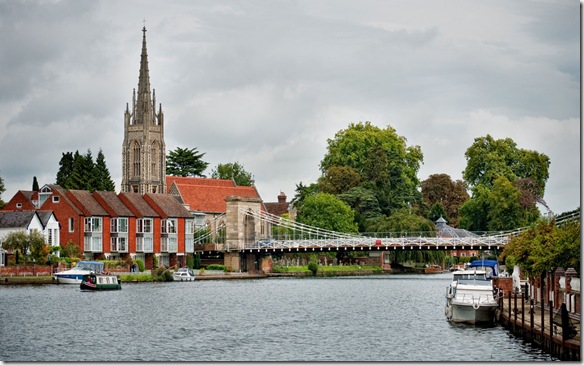 Approaching Marlow, we cruised under the bridge then circled back towards the moorings at the gardens 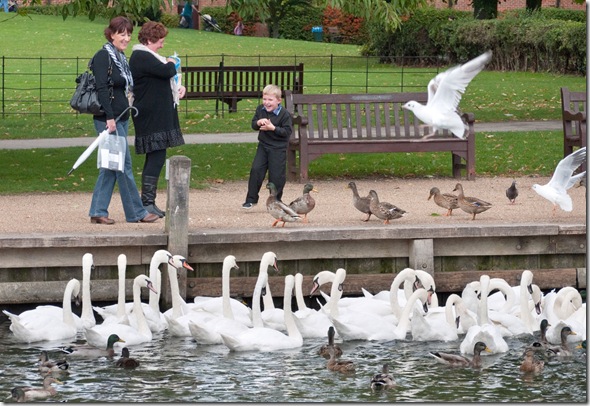 This little chap was squealing with delight feeding all the birds

Shortly after arriving in Marlow, we walked through the rather lovely town to the train station, as Jill was heading back to Reading to collect her car and visit another friend, and I was able to accompany her to collect my glasses as our next guests, Kim and Joe, had called to say they were delayed due to two poorly cats.

I finally collected two pairs of glasses worth the money I paid and importantly that I'll wear!   Hoorah!  A big thank-you to the Reading branch of Specsavers.  I'd also been able to order a pair of reading glasses and had the anti-glare and reactions on my now single vision lenses, for the same price as I'd previously paid for the varifocals, and was so relieved it'd all eventually worked out.  Doug, one of our readers, commented that his partner had experienced a similar problem - it's good to know I'm not alone and not just an old grouch!

We managed to find Jill's car again which was safe, but sadly not looking as shiny clean as expected, and there was no sign that a valet had been done - but we had no time to complain as she was taking me back to Marlow before heading to east London!  On a positive note it was still cheaper than the station car park.

Meanwhile Barry headed back to the boat from the station, and took a few photos along the way ...

A view towards Marlow Lock and weir from Marlow Bridge

''The Compleat Angler' Hotel by the bridge, preparing for a wedding - a fabulous venue 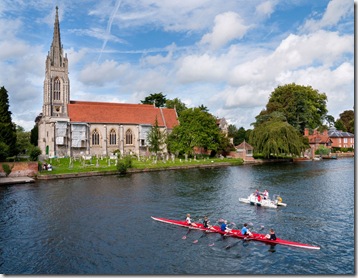 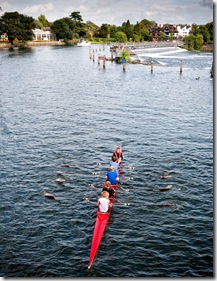 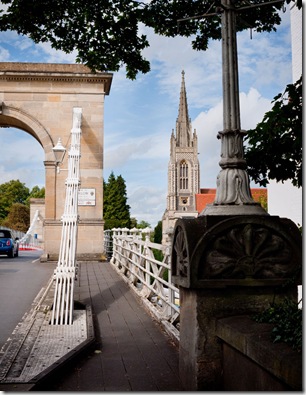 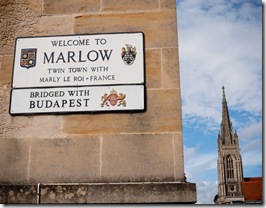 Marlow Bridge, opened in 1832, and the bridge linking 'Buda' and 'Pest' across the river Danube, are the only two remaining suspension bridges built by Tierny Clarke - so says the other sign mounted on the bridge

Our mooring was on the banks of Higginson Park, containing 'Court Garden House', now a leisure centre.  This was the original home and grounds of Dr William Battie, a mental physician (where the term 'batty' comes from), who designed and built the house in 1758.  Local folk-lore has it that he initially forgot to include a staircase to the first floor, which had to be added later.

The house and gardens were sold off at one stage and were going to be turned into a housing estate, but luckily in 1926 it was saved for the people of Marlow, largely due to the efforts of local resident General George Higginson, who rallied the town to purchase the estate - hence it's name 'Higginson Park'. 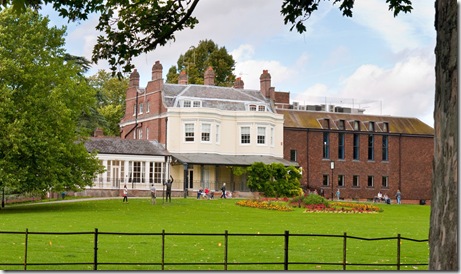 The view from our mooring - what a delightful sight

Jill dropped me off mid-afternoon, and Kim and Joe drove up from Brighton once they'd made sure their cats were okay, arriving around 1800hrs and easily finding a parking place by the train station in Marlow for nothing!  It just goes to show that we never know what parking arrangements guests will find in places we visit, and sometimes we're happily surprised.   Barry walked the short journey to meet them and bring them to the boat.

Our mooring site must've been one the most stunning we've experienced - the towns just seem to get more and more affluent along the Thames.  Even more amazing was that the people we saw in Marlow on our brief visit were all so happy and friendly; a pretty perfect place really if you could afford to live there! 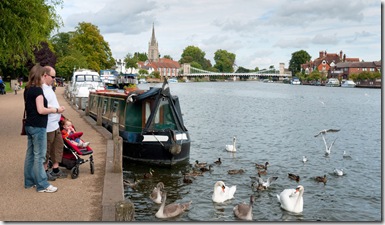 There were no shortage of swans, ducks, geese or of people to feed them - despite the sign saying 'Don't Feed The Birds'

Later in the afternoon, the bride and groom from 'The Compleat Angler'  wedding passed by 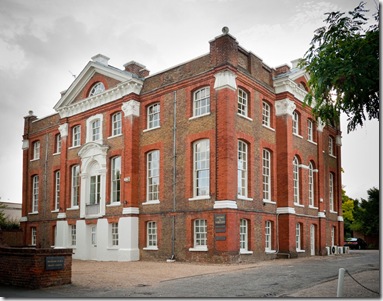 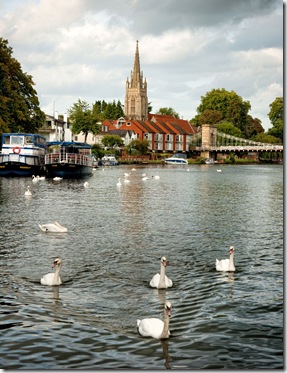 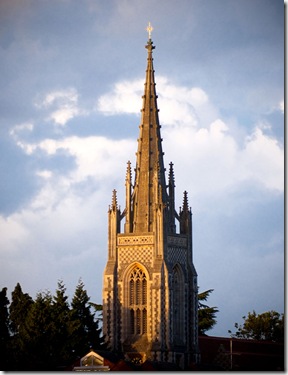 Such a picturesque place 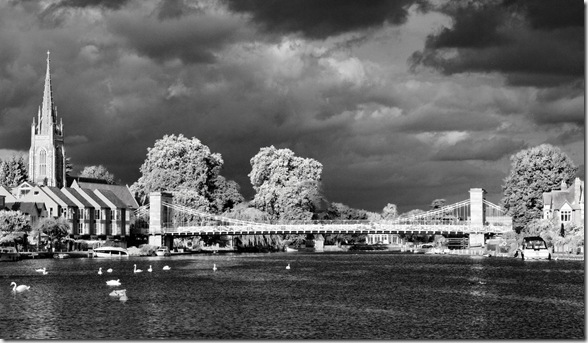 At one stage there were storm clouds brewing until magically the sun burst through, creating a surreal light over the river ... 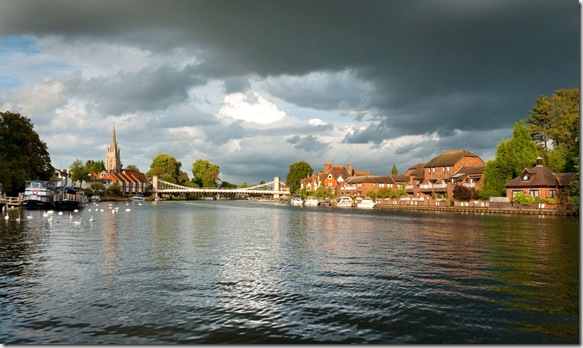 After Kim and Joe's stressful day, we chose a chilled evening with a delicious dinner, a few drinks, and a couple of games of 'Six handed Rummy'. Who would live in a place like this - very lucky people we reckon!