Our first Tardebigge experience - how many locks?!


On Monday we left the England's second city behind, and idled along the greenery of Kings Norton and Bournville, and taking a short walk to the Guillotine stop lock on the Stratford Canal. Last winter, with the help of £200,00 from the 'People's Postcode Lottery' funds, this unique construction was restored and only opened on 30th April.  In the latest edition of Towpath talk they say "There is a worry that the structure will be once again spoilt with graffiti and damaged. Dean Davies reported that the trust is trying to educate local youths on the value and status of the monument."  Sadly their worries have come to fruition, with graffiti appearing on each side. 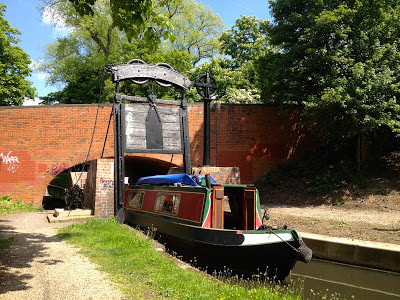 Guillotine Lock, aka Kings Norton Stop Lock - the only one of its kind and a Grade II* listed and Scheduled Ancient Monument

Continuing on to Alvechurch, we moored not far from where we hired a narrowboat called 'Wye' from 'Anglo Welsh' in April 2007, Barry's first foray onto the canals - which caught him hook, line and sinker!

On that occasion we chose not to do the 'Tardebigge Locks', the longest flight in the country - luckily for us this time we had an extra pair of hands and managed 42 locks in one day! It was hard work but fun, and with rare bright blue skies and sunshine, I also got a bit sunburnt  - I even alternated with a bit of driving into the locks for the very first time on AREandARE with hardly a bump - very impressive I thought.

Jenny must have the idea now, and to make it even quicker we used the fold up bike to get from one lock to another and smooth the ride for the captain ... 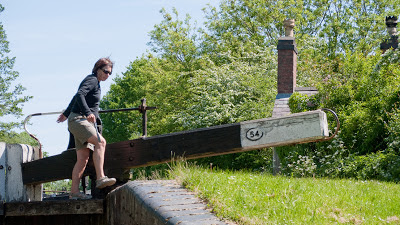 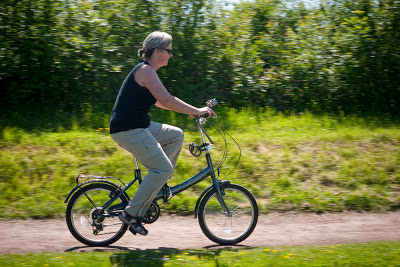 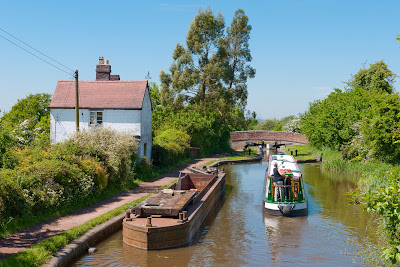 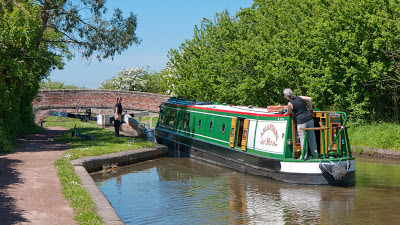 Just to prove it, we have a few of Barry's shots - here I am gliding her in, gently and smoothly ...

Last night we moored not far from Hanbury, so Jenny could cycle to Hanbury Hall today - Barry and I chose to stay and catch up on some work-related things as we'd previously visited there (when we had our National Trust membership).

Tomorrow we'll be heading down the Droitwich Canal for the first time - though the timing isn't so good and we may not get a mooring in Droitwich.  We hadn't realised until yesterday the 'Churches together' group have chosen 8th and 9th of June to have a weekend of family fun and activities at Vines park.  A number of Boaters Christian Fellowship narrowboats have been passing us - so we're crossing our fingers and other appendages there's a 60 foot long space there somewhere for us ...
Posted by Barry and Sandra at 19:02