A delightful weekend in Droitwich

It's been a hectic couple of weeks aboard AREandARE, so blog posts are a little behind!

To make up for it there's some of Barry's amazing photos on this blog which is a rare treat - above is a scene from the journey to Droitwich.

Moorings were still plentiful when we arrived, with spaces along the towpath and in the basin all weekend.  It was a busy place though with so many BCF narrowboats around; a pleasant atmosphere with lots going on.

For us though, it was a great opportunity to discover more delights of Droitwich, and catch up with family.  We've visited the town many times in the past, but found places we never knew existed.

A short walk from Vines Park, we came across Droitwich Lido Park - a vast expanse of parkland and amenities that I'd not seen previously and a great find for all the great grandchildren to visit when they come to see their great grandparents! 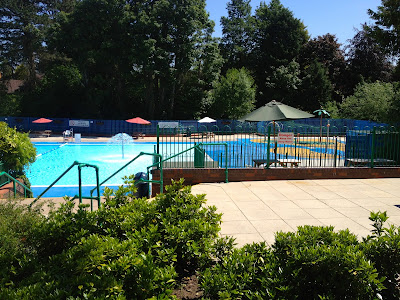 There's lots of historical buildings in Droitwich too ... 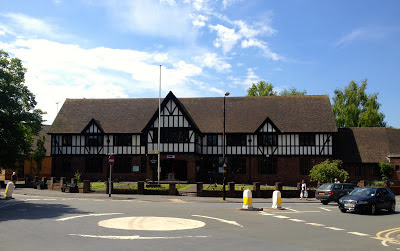 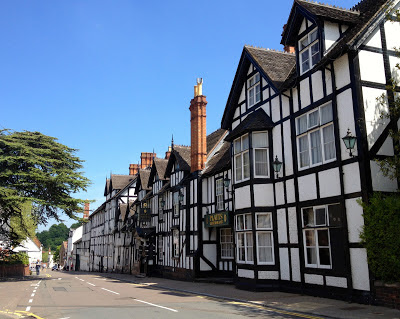 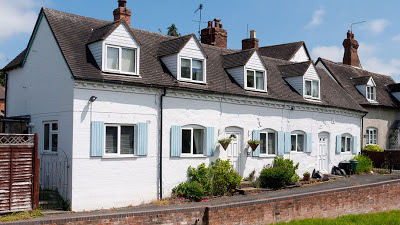 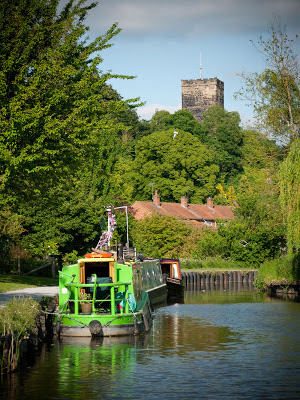 Still a few mooring spaces left - and a trio of accommodation here: boats, houses and a church 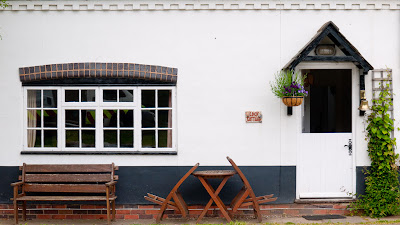 Coincidentally my three sisters had planned the same weekend to stay at my parent's home to do a bit of decorating, so Barry and I went to assist - well Barry assisted and I took my parents out to Whitley Court. 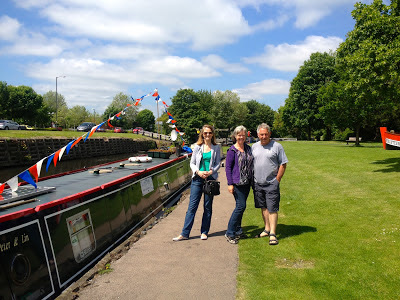 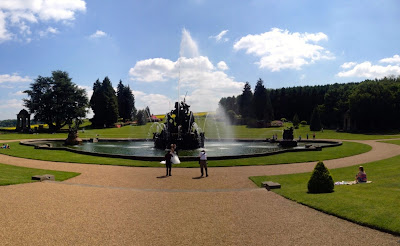 The spectacular Perseus and Andromeda Fountain

We managed to get my parents onto the boat for the first and probably only time which was very precious - here I am with my dad who wanted to come and live with us I think! 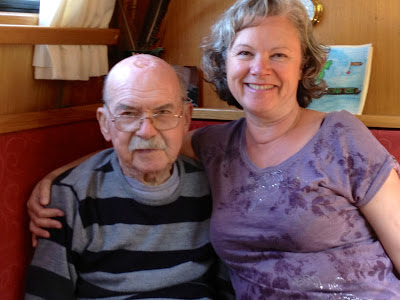 We had lunch at a pub we frequently go to, we've just forgotten the name of it!  This one below is just up the road - we remember this one, it's called 'The Cock Inn' - no comment ... 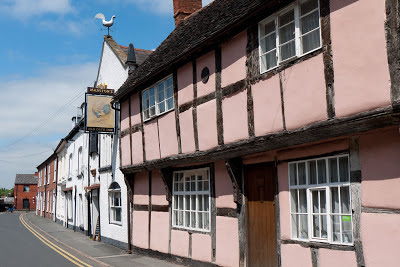 My dad is getting very old, but for 93 he's still amazing and loves a game of pool.  He's also still a very good player despite his failing eyesight and stability - it's wonderful to be here spending time with him. 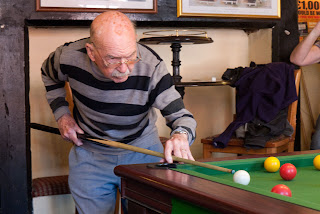 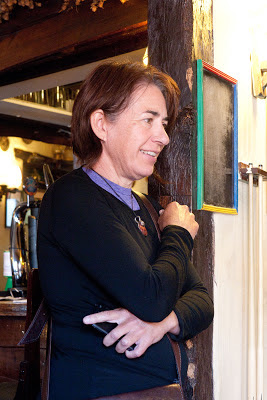 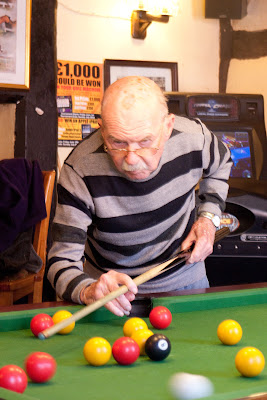 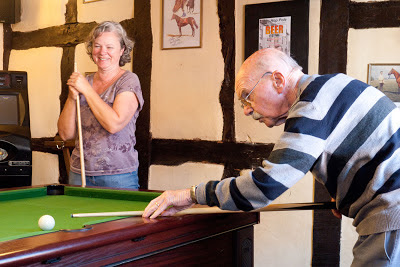 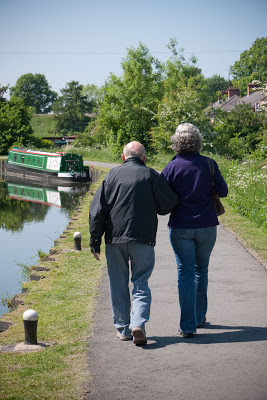 Back in the basin and here's a photo of the mural showing the legendary 'Captain Kidd' which was unveiled on May 4th.  In June's Waterways World, there's a write-up of this which states the mural "...was inspired by the tale of Richard Coote, MP for Droitwich from 1688 to 1695. Coote was appointed governor of America's early colonies, and recruited Captain William Kidd and others to captain a privateer galley to stop piracy.  The plan backfired, and Kidd, of course, went on to become a pirate himself." 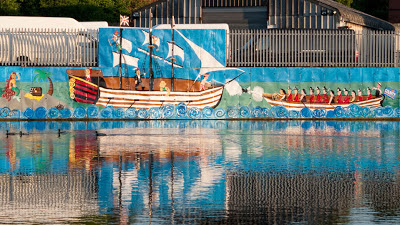 On Sunday Jenny met my three sisters - so we had two Teutenbergs and six Walshes sat around the table enjoying a Sunday Carvery - very special. 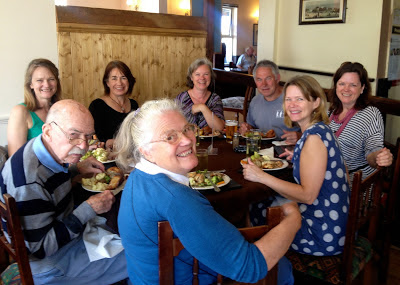 We finally left Drotwich on Monday morning, heading to Worcester.  The canal is definitely worth a visit, so well kept with reed beds either side ... 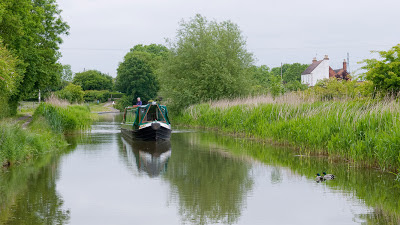 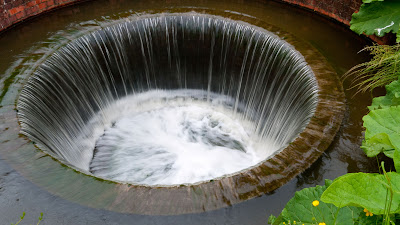 And at the second to last lock, we became the centre of attention for a mass of schoolchildren from Kings Hawford school who were taking part in a sponsored canal walk, and had great fun helping to open and close the lock gates - it was quite unnerving having so many young people so close to the paddles and gates, but they were all kept well controlled by the teachers so thankfully there were no mishaps! 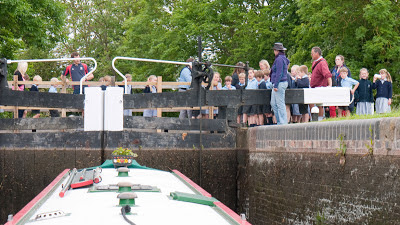 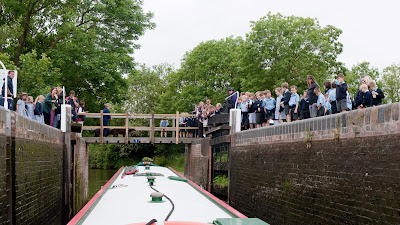 The final lock skims past a very grand property, and then we were onto the River Severn once more (the last time was May 2009) and rushing to Worcester at a breathtaking six miles an hour with the flow! 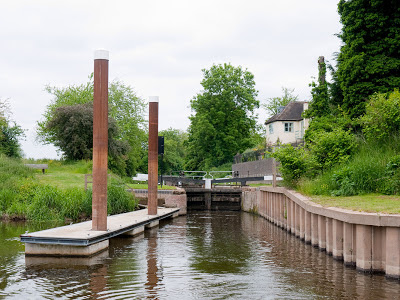