Two weeks have passed since my last post - and there's not a lot of progress to report! I've chatted to Barry via Skype, and apart from having a nasty cold, he's working in the shop and doing a stocktake in readiness for a possible sale (nothing definite, so watch this space), and catching up with friends and family whilst waiting to hear about his UK visa application - which has now been 'sitting' in the queue in Manilla for four weeks. The guesstimate is six to twelve weeks, so we're unlikely to hear anything for at least another two weeks in the best case scenario!

Meanwhile I'm continuing to keep myself occupied, rather than pining alone on AreandAre. I've just returned from four days supporting, and enjoying the company of, my parents in Worcestershire. Prior to that I had another lovely day with my eldest daughter and grandson. I even had a night out at the opera! Well there was an operatic medley at the medieval St Oswald's Church in Malpas, with the most beautifully melodic and powerful voices echoing through the building - such a treat, and one Barry would've hated. The only time he went to the opera was in Sydney, and he loves to regale people with the tale of how we felt he 'should' experience an opera, but before the halfway point decided he could bear it no longer and attempted to escape. Finding the exit, he was told in no uncertain terms that if he left he wouldn't be allowed back in. To which he replied "Good!", and dashed quick-smart to join his brother Peter in the pub!

So in actual fact, I'm making the most of Barry's absence and doing the things I love doing that he wouldn't. Tomorrow I'm hopping on the train in Chester and heading to Brighton to see my younger daughter Kim.  On Friday we're travelling a short distance to Lewes, and setting up camp for two nights of music, workshops, wild crafts, delicious food, talks, debate, wild walks, forages, bush crafts, yoga, dancing, meditation song and other such soulful and wild uplifting experiences at 'Into the Wild'. I've never camped at a festival before, so it's going to be such fun! The forecast seems to be fine and dry, but whatever the weather I have no doubt we'll have a magical time.

When I return next Tuesday afternoon, I'll have a few 'life coaching' days, then I have my birthday weekend to celebrate with my daughters, two of my sisters and future brother-in-law.

I have a sneaking suspicion by the end of next week, if not before, I'm going to have to work out a way to move AreandAre to the pump-out point which could make for an exciting story in the next post ! 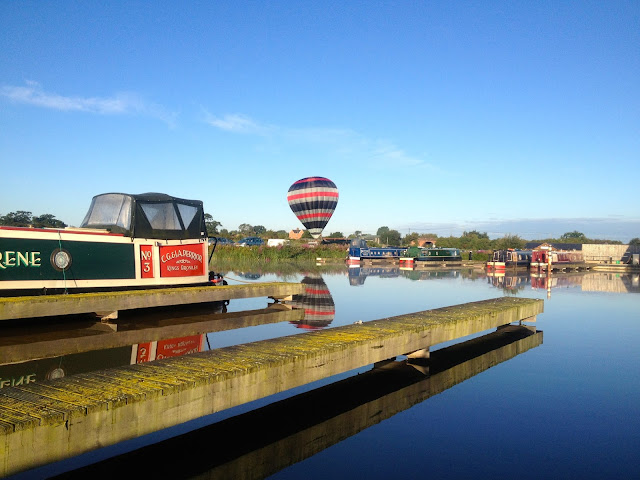 A hot-air balloon lands at the marina last week - this is the view to the pump-out opposite our mooring (on the right of the picture). A short distance, but for me a rather scary prospect to reach!
Posted by Barry and Sandra