A wonderfully wild weekend - and a stroke of luck

I returned to AreandAre yesterday afternoon after an uneventful journey from Hove, Brighton, back to Tattenhall - by train, underground, and bus. When it works well, the British public transportation system is fabulous - especially when you have the time to shop around for bargains!

Sadly, the pansies I'd bought from my visit at my parents and didn't make time to plant in pots, didn't survive - mainly due to the gorgeous dry weather we've had since I left the boat in the rain last Thursday! Mustn't complain though, it meant our camping weekend wasn't waterlogged.


And what a wonderful 'Into the Wild' weekend it turned out to be. I felt very 'at home' with the down-to-earth and unpretentious people who populate such fun festivals, and will definitely be doing it again while we're living here in UK - with or without Barry (I strongly suspect the latter!). I met some fascinating people, and experienced many mind shifts and awakenings, in a spiritual and soulful way. If only everyone in the world knew how to live so simply, there would be far less struggle, unhappiness and discontent.

A great happening (though I wasn't so sure at the time!) was my iPhone decided to completely 'lock' itself on the Friday evening, shortly after I took the one and only photo of the two days. Normally the battery life runs out fairly swiftly, but on this occasion it didn't until Monday lunchtime! One would imagine you could just take the battery out and re-set it - not so on an iPhone (unless there's something I don't know?); you need a special device that only phone shop people have, to do so. I was therefore forced to let go of any need for contact with anyone apart from those present at the festival - and not able to take photos but just BE there. The universe works in mysterious ways - and I was surprisingly grateful to it. 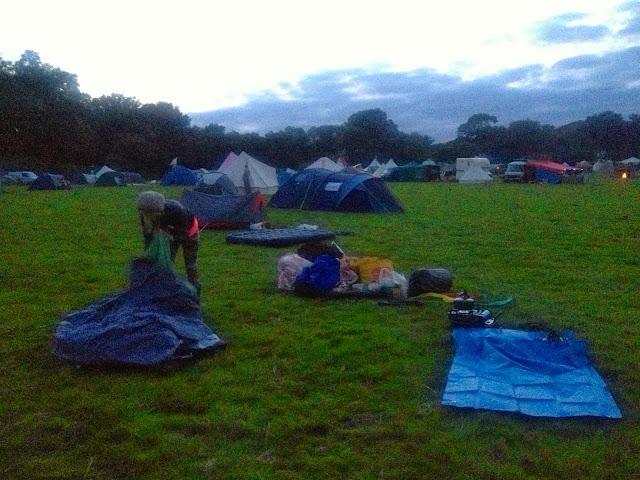 I danced and sang, meditated in silence and with chanting, walked and sat by the camp fire in the woods while those around me made up songs and played a variety of instruments (until 0400hrs on Sunday morning!), went to a creative poetry and words workshop, a dying well workshop (seriously, there's ways of doing this and it's a current fascination of mine), and had an introduction to Shamanism and my 'power animals', to name just a few of the highlights (don't knock it until you've tried it!). Oh yes, and I had my face painted! It was rather amusing really. One of the entertainers had some face paints, and we'd seen lots of lovely designs on people, so Kim suggested we get ours done for some fun. He looked at Kim's face and was in awe of her beauty and said he didn't want to spoil it, just enhance it. He painted it very delicately. Then he looked at my face and said he was going to paint my wisdom. I couldn't see what he was doing, but I felt a decent amount of paint being put on. I was smiling inwardly, imagining what he'd said to Kim and how he seemed to now be almost covering my face up! 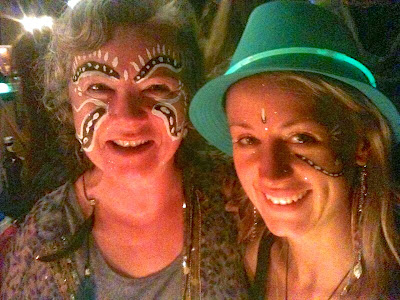 What do you think? The wise crone (almost!) and the stunning maiden :-)

Moving swiftly on, some good news! I received an email a few weeks ago informing me I'd won £500. Naturally I was a little disbelieving, but clicked on the 'accept' button as it was from a recognised source - the Avon Customer Panel, which I knew I'd done a few surveys with (one of the ways I've been spending my time to try and earn a small income). In the feedback box, I said how wonderful, so long as it wasn't a scam. I received a reply saying it was definitely NOT a scam, and I'd receive the cheque in a few weeks.  Informing Barry, I could tell from his response he didn't believe it for one second, but humoured me. So I waited until the cheque arrived, took a photo, and emailed it to him! And below is the extra proof - how about that for luck aye? You've got to be in it to win it I say - yippee! Bring it on, I'm open and ready to receive ... 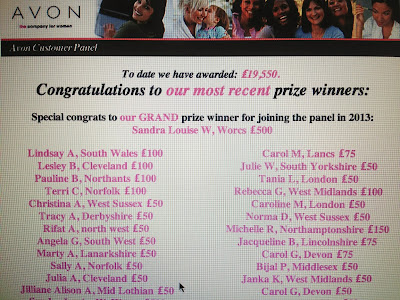 I spoke with Barry this morning - no news yet about the visa. It'll be six weeks next week since it was posted, so fingers crossed. Can you all please cross something too, and the energy may just shift the application a few places in the queue.

There's almost news on the sale of the business, but nothing signed or sealed yet so I'll keep you in suspense for now.

This weekend I celebrate my birth - and I shall be surrounded by members of my family which will be lovely. My sister is driving up from Exeter, along with her partner Ray, and Kim's coming up to stay with Lisa for the weekend, so I'll get to see them and my grandson and son-in-law too.

I haven't had to move the boat to the pump-out yet, but I plan to do so in the next couple of days, rather than as a birthday treat!
Posted by Barry and Sandra