Apologies are due - Barry didn't manage to find the time to post any photos last week while I was away as promised - he was too busy drinking pottering about on the boat doing all sorts of jobs.  He did do a bit of drinking too, especially after his boating accident when he slipped off the gunnel onto the corner of the cratch and gashed his eye ... 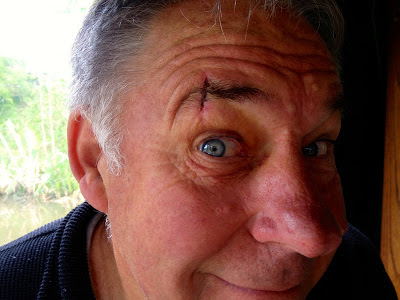 Returning to the boat after we'd spent a night with my sister in Lichfield, a couple of friends gave him a lift and of course it would've been rude not to go for a drink to the Swan at Fradley Junction with them.  The photo of his eye above was when I returned on Saturday - it was looking much less bruised by then I think. 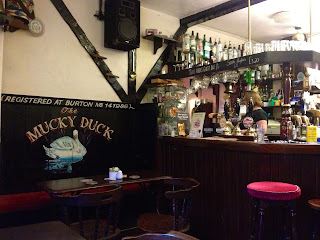 The quaint bar at The Swan in Fradley Junction

We had some very bad news last Monday that's made us even more sure the move we've made is a good one for us.  On our return to Fradley, once we'd collected the hire car from Lichfield, we spotted a narrowboat we'd seen a couple of times on our trip in 2010.  We'd chatted to the boat's owners for ages in Goring and Bathampton, so were really pleased to see the boat again.  We hoped the same people were on board, and went to see before travelling to my sisters.  Indeed it was they - and we had a fabulous catch up over a cup of tea.  They had such plans for the future.

Sadly, on Monday, Barry heard someone knocking on the boat around 0815hrs (of course he was still in bed!), and luckily managed to get himself up and out.  It was the narrowboat from Saturday, and he was told the man we'd re-met had, very sadly, unexpectedly collapsed and died the night before.  The lady said to Barry "We have a plaque on the boat which says 'Don't count the days, make every day count' - and we did!".  Bless you both, and rest in peace lovely man.  We feel very privileged to have spent time with you - and the photo I took by your boat may be the last one of you both, so please get in touch and I'll send it to you.

Carpe diem everyone - seize each day and be thankful for what you DO have, instead of worrying about what you don't - for one never knows what's around the next corner.

I spent last week in Brighton with my youngest daughter - so wonderful to see her and spend time in such a buzzing city.  The sun shone brightly on Thursday - and the beach was crowded even on a weekday - you've got to make the most of any opportunity for some vitamin D in England! 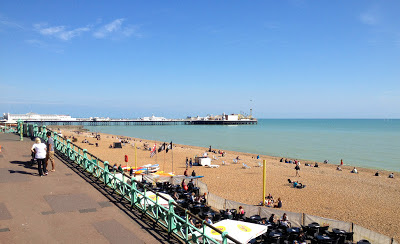 
Enterprise have a great deal on car hire over Bank Holiday weekends, and we've been planning on hiring one to go to the Crick Boat Show.  Unfortunately I left it a little late to book one, and discovered they had none available from Birmingham, only Tamworth.  So rather than moving this week, we're just mooching around the Fazely/Glascote area ready to hire the car Friday morning.


It was lucky that we were still on this stretch of canal, as we had an unexpected surprise on Sunday when Andy and Helen texted to say they would be coming past us.  Another awesome evening with them, eating curry, drinking wine and playing six-handed rummy - marvellous!

I have some coaching clients booked in tomorrow and Thursday, so it's also useful to have good internet signal here.

We'll be at Crick on Monday, and hope to finally meet Tom and Jan from NB Waioru.  Oh yes!  And we'll be looking for suitable life jackets for our grandson.  Lisa had bought one from Amazon, but it was too tight, and oh so bulky - does anyone have any suggestions for a good life jacket (that he'll feel comfortable wearing) for an almost four-year-old?
Posted by Barry and Sandra