Celebrating my birthday in New Zealand and other 'lasts'!

With less than six months to go now before we fly back to UK 'indefinitely' (assuming all goes to plan!), there will be a number of 'lasts' coming up for us.

As the saying goes, you have to close one door in order for others to open, so we're very pragmatic about these changes.

My 53rd birthday was a quiet one, it didn't stop raining here in Gisborne from the moment I woke up until the following morning!  Last year Barry and I had a lovely couple of days in Mahia and the sun shone, but this year he was working from 1000hrs to 1600hrs, so I hadn't planned much.  It was also our third anniversary of our wedding on board Northern Pride on 26th September - we celebrated by me working and Barry playing badminton - not very romantic!

I had lunch with a couple of friends, then visited another one out in the country for a cup of tea, had a sneaky snooze on the sofa for half an hour, Skyped with our grandson, went out for dinner with Barry, then called in unannounced to some friends for a game of darts!  So I still managed to fit some fun things in despite the rain! 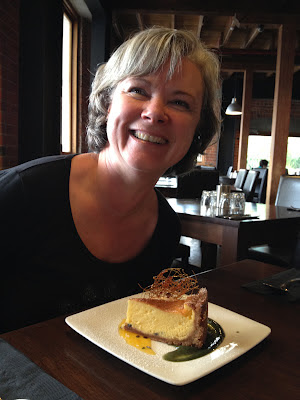 
On Saturday, we had a party at home, with a mixture of different groups of friends, as it will most likely be the final time we have a party before selling our beautiful home. 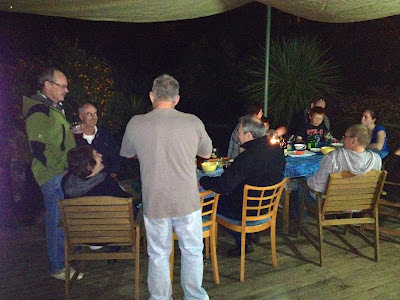 Barry regales some of the guests with his brewing techniques - or something to do with narrowboating I expect!

The bathroom is just about completed (hurrah!  I love it!) and we've been tidying up the outside of the house and garden.  There's a few more little jobs to do, though they won't prevent us putting the house on the market.  It's a timing issue now - will it sell really quickly and we'll need to find somewhere to rent for a while?  Or will it take ages to sell for a price that's acceptable to us?  Exciting aye, not knowing what the universe has in store for us ...

Two of my sisters are coming to NZ on holiday from 18th November to 7th December, so it would be really good to still have the house when they're here - but if someone came along and offered us a good price we wouldn't say no!

I've also recently booked flights to Bali from 19th December to 9th January. I'm meeting my youngest daughter Kimberley there to celebrate her 30th birthday on 4th January - how wonderful to have such an opportunity.  I'll be away from Barry for our 'real' wedding anniversary on 22nd December, and also xmas and New Year - but his children, Jamie and Tom will be in Gisborne, and it'll be lovely for them to spend their last xmas with Barry before he leaves for UK - though they may be celebrating in a tent on the beach if we've sold the house before then!

We're now seriously beginning to visualise how we're going to earn a small income whilst continuously cruising - so long as I don't have to work as a midwife I'll do (almost) anything ...
Posted by Northern Pride at 06:22