The culmination of the 'down south' experiences ...

As soon as Emma (Barry's niece) put the announcement on facebook earlier this year that she and Mathu were getting married in Queenstown, I sourced the cheapest flights I could to make sure we could afford to go!  I've covered many of the sights and experiences in the North Island of New Zealand, and knowing we're planning on returning to UK to live for the foreseeable future around February 2013, I'm on a mission to see as many of the parts of the Southern Hemisphere I've not been to as possible in the time left here.

I booked flights from Auckland to Queenstown return for us both for less than $500 (around £250).  If we'd travelled from little old Gisborne it would have cost around $2,000!  As luck would have it, I had a Life Coaching weekend just prior to the trip, so Barry just had to fly up and off we went.

We imagined that Emma and Mathu had chosen Queenstown as it was one of their favourite spots, but as keen skiers and snowboarders, they'd decided that as they also hadn't seen much of the South Island (isn't it odd how we don't visit our own 'back yard?), they would tie in a road trip with a wedding.  Cool idea, aye?  Emma's organisational ability was amazing, she made her own dress and chose a stunning wedding location and the reception was definitely different to any other I've had the pleasure of being at.  Oh and of course lucky Emma had Uncle Barry as the photographer ... 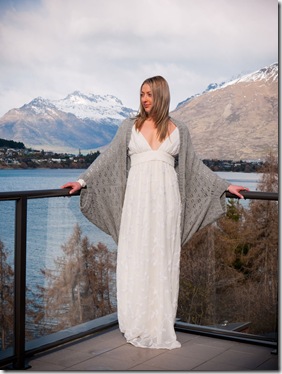 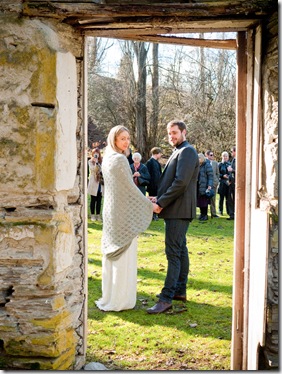 The beautiful bride with an incredible background - and the happy couple

Emma reminded me of Cate Blanchett as the Elf Queen Galadriel in the NZ film Lord of the Rings.  The silver wrap was hand knitted by her amazing mum Joy, who also just managed to finish Mathu's cardigan that he wears underneath his jacket, the evening before! 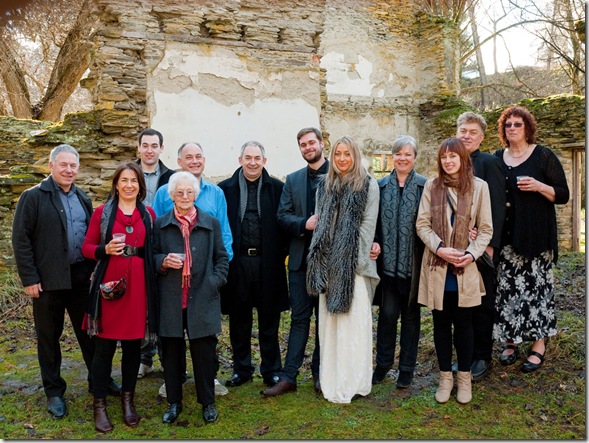 Of course for the family photo Barry set up the camera and someone else took it, so by the time he'd skipped into the group we ended up at opposite ends of the picture! 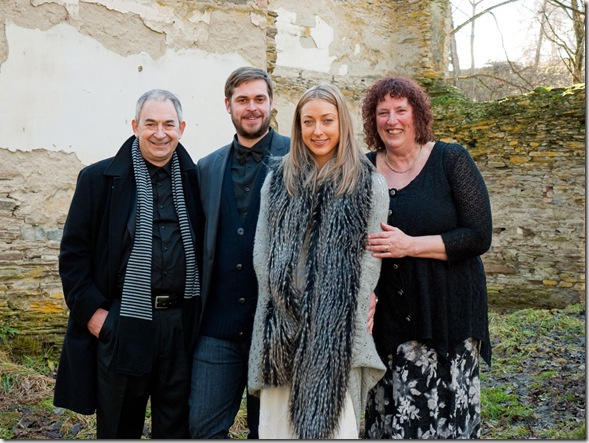 The newlweds and the proud parents of the bride - Ray, Mathu, Emma and Joy 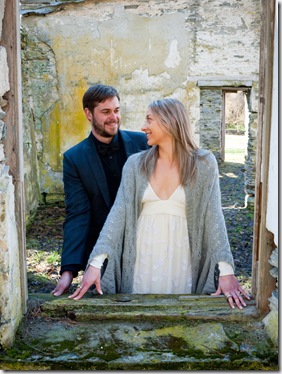 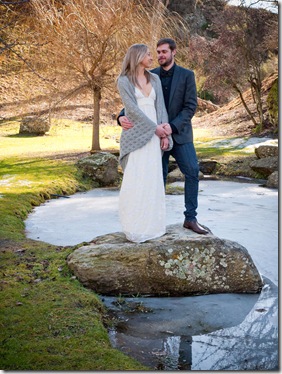 We were bussed from Queenstown to the wedding venue in the mountains on the Lake Hayes Road, and then back on the bus for a winery tour.  The wedding ceremony and photos had taken a little longer than anticipated, so we only managed two of the three wineries that had been planned for a visit.

The first one, Amisfield Wine Company, had a spectacular setting overlooking Lake Hayes.  The blue skies and sunshine against the white mountains was invigorating - we had to drink more wine and eat more food we felt so alive and healthy! 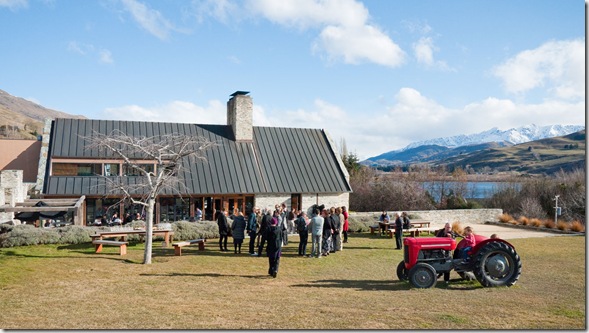 Amisfield Wine Company with the wedding party in the foreground

An hour or so later, having tasted the most delicious cheeses, honey combs and pinot noir (their speciality), everyone was rounded up once more for the next destination of Gibbston Valley where they have built an underground wine cellar.  The cellar remains at a constant, pleasant, temperature all year round and was a very intimate and cosy setting for some more platters and a lot more vino!  Of course there was the obligatory (cup)cake cutting ceremony, and a few speeches and toasts to Emma and Mathu ... 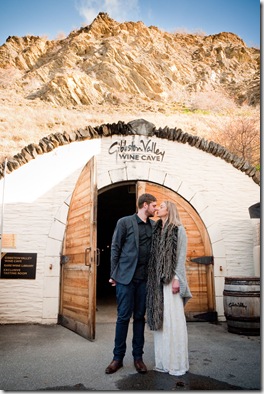 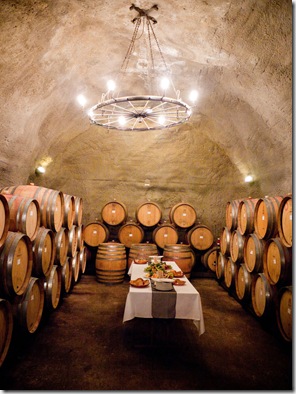 The wedding and reception ended around 2000hrs, and we all travelled back to Queenstown where some people got changed and partied the night away - mainly those of a certain young age, and of course Barry's brother Peter managed to stay the course!  As I mentioned previously, I played nurse to Barry and Jenny and we all had an early night after their slight disasters!

On the Sunday, I had a brainwave and we booked a rental car so we could explore a little more of the area with Jenny and Lauren, Barry's sister and niece.  Although it was great to spend time with the Teutenbergs, and Emma and Mathu's friends, after travelling so far it would have been a shame not to see farther afield, and of course get a glimpse of the ski-fields that Queenstown is famous for ... 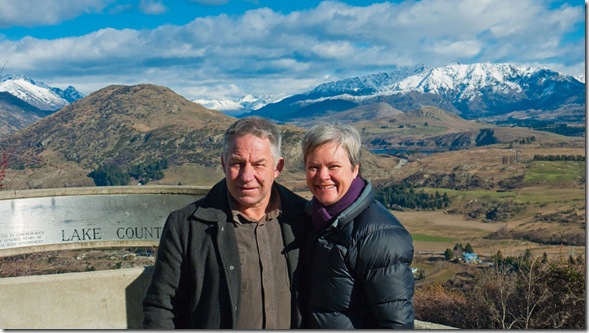 Up in the mountains, on the drive from Queenstown to Wanaka 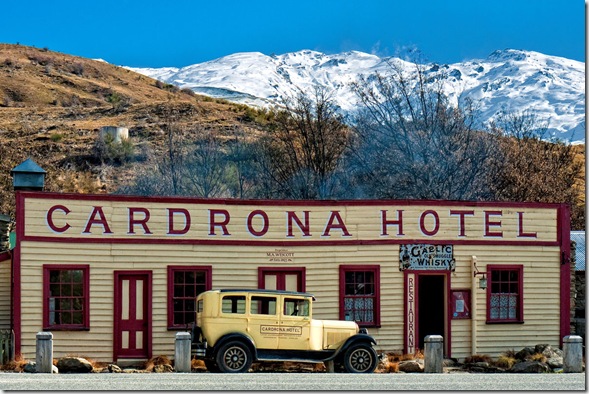 The Cardrona Ski field is just behind the Hotel, and today's temperature is minus 3 degrees!  The Hotel is infamous for the fact that some years ago, the owners marriage broke up and the story goes that the wife took half of the building, the restaurant, with her to Auckland!  You certainly can't tell I have to say, it was such a neat, quaint place, and I'd love to stay there one day.  Sadly we had to get the hire car back to Queenstown by 1800hrs so could only stay for a 'to go' coffee and a quick look around. 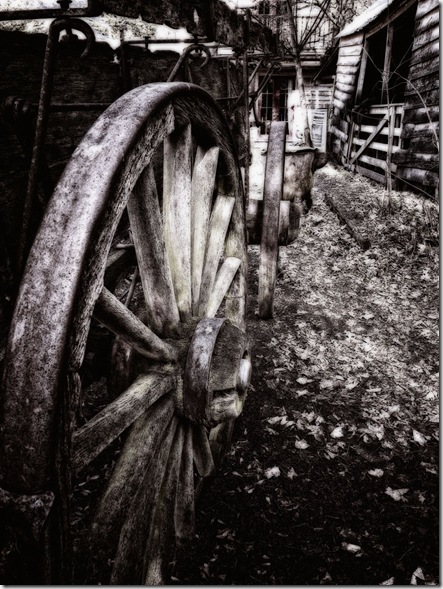 Wanaka is a little less than an hour's drive from Queenstown and is well worth a visit.  It has a much more open feel about it, more spacious and less touristy somehow.  Here's a few of Barry's favourite pictures ... 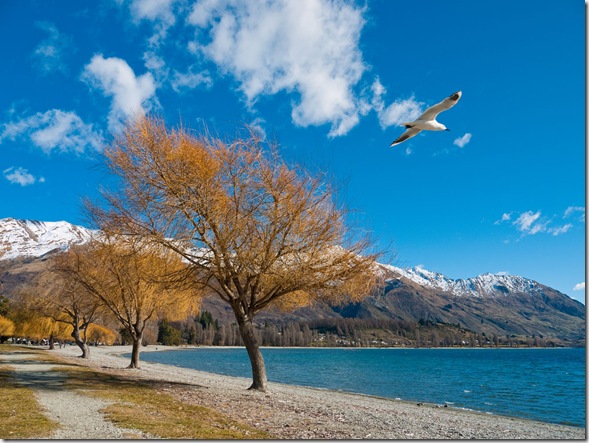 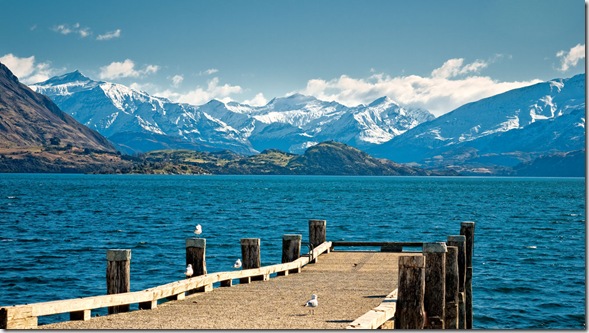 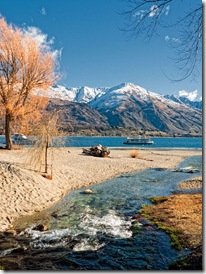 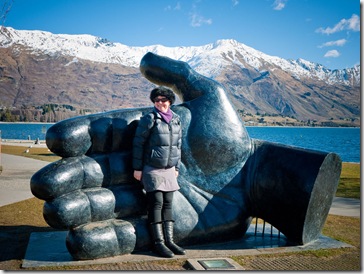 After lunch and a quick look around, we went to Puzzling World.  The website states:

Stuart Landsborough’s Puzzling World is a world unique attraction specialising in puzzling eccentricity. For over 35 years this remarkable business has entertained and amazed visitors of all ages, attracted to this beautiful part of the world. Offering the world's first "modern-styled" Great Maze, incredible Illusion Rooms, a Puzzle Centre/Café, large Gift Shop and eccentric architecture and Oddities. We are possibly the most photographed attraction in New Zealand.

We'd been recommended to go here by a number of people, and thought that one a half hours for the visit would be sufficient to see everything - how wrong we were!  It was a fascinating place and we had to literally drag ourselves away. 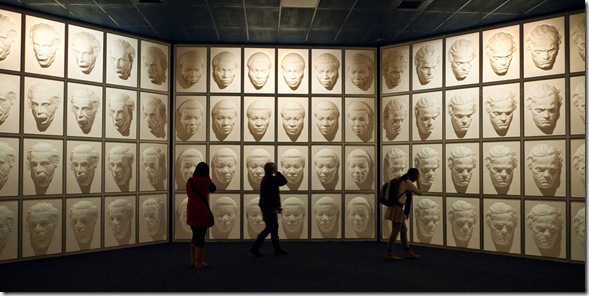 The Hall of Following Faces - seriously, as you walk around each face follows you - spooky! 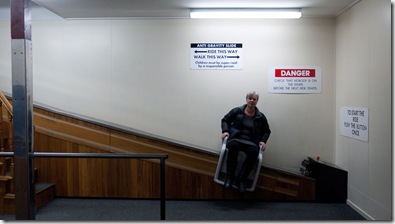 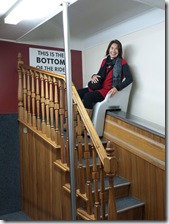 The Tilted House, with a lean of 15 degrees (I am on my way up not down in this picture ) - I was so nauseated in here I could hardly stand up and couldn't wait to get out - totally upset my ears' bony labyrinth balance centre 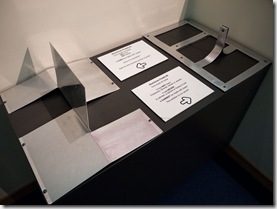 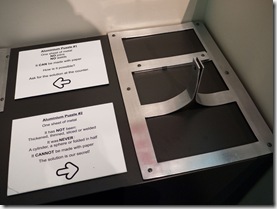 The technique of this illusion was used in The Lord of the Rings film to create tall people and little people. The shape of this room is totally distorted although when viewed from outside through a window, the room looks perfectly normal. Prepare to be amazed!

Well there you go, you learn something new every day! 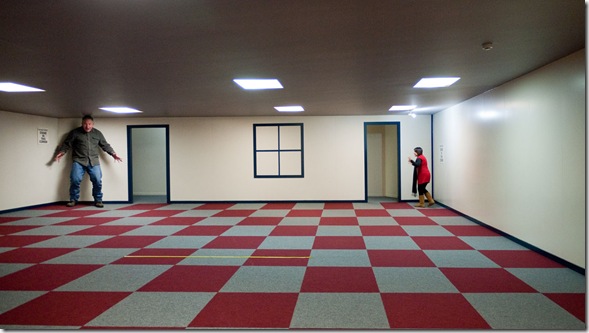 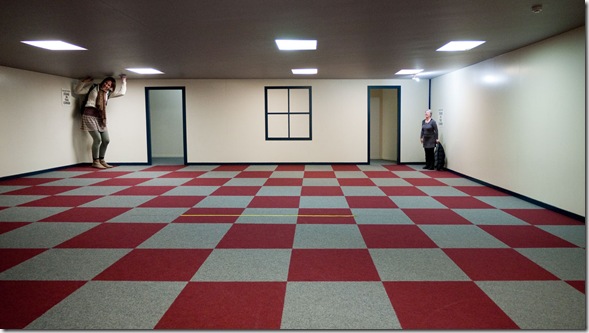 It's all a matter of perspective

Then came the maze which has 1.5km of passages.  Now Barry had told me when we went to Hampton Court the secret of getting through a maze, but for the life of me I couldn't remember it!  The challenge was to get to the four corners and then find your way back out.  I beat Barry to the four corners by about a minute, but getting out again was another thing - Barry managed it easily whereas after more than 30 minutes of going round and round in circles, I cheated and slipped through one of the emergency exits!  Time was running out, we had to get the hire car back after all - does anyone else know the maze secret?  I know it now, but if I told you I'd have to shoot you ... 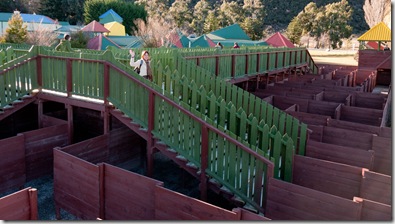 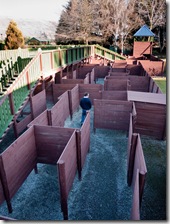 Lauren trying to find her way to the four corners 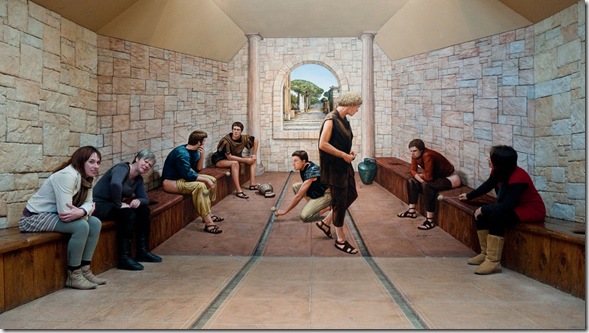 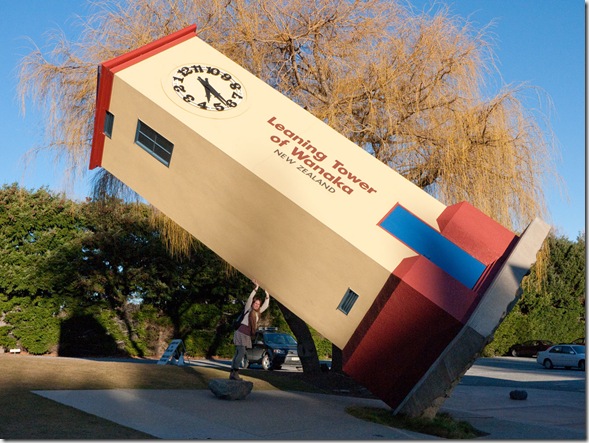 There's certainly plenty to see and do around Queenstown, but as with most things, you need a lot of money if you want to 'do it all'.  We managed to fit in some great experiences and had an 'amazing' time - thank you so much for the opportunity to be at your wedding Emma and Mathu and for the experiences we had in Queenstown.