The return journey - not such plain sailing!

Barry left Gisborne this morning, for the first time since we came back to NZ in November - it's difficult for many to imagine, but leaving this small town on the 'edge of the world' is actually quite a big thing!  It's a good three hours to the closest 'large' (I use that term loosely) town of Napier or Whakatane, and either south or north west involves winding, single lane roads, through gorges.  Directly north takes you around the spectacular scenery of the 'East Cape' of the North Island, and is about five hours to Whakatane (pronounced Fakatani in English dialect, not wok-a-tain as it looks!).

Barry headed through the Waioeka (why-oh-eeek-ah) Gorge, then west to Hamilton on the other side of the North Island.  This is where our largest 'tertiary' hospital is, for June to have some tests and possibly stay in for a night or two.  Barry was then driving south to Wellington, to spend some time with Tom, his son.

I'm having a treat this weekend and going up country, not quite as far as the Gorge, to a place called Haurata Country Retreat with some girl friends from work - to walk and breath the fresh country air, drink a little vino and soak in the hot tub - bliss!

The public transport system isn't so wonderful in NZ as it is in UK, we generally either have to drive or fly to get around.  Of course there's bound to be times when the UK system grinds to a halt, or just slows us down somewhat, but it's still an amazing system ...

There's a lot more photos than words in the following blog, the journey obviously made a positive impression on Barry that day - maybe it's the acute awareness we had of our time on Northern Pride coming to a close that made us appreciate the surroundings even more.

Our return train was booked for mid-morning, but to get into Brighton we needed to be up in plenty of time - hence we arose before 0700hrs, to say farewell for now to Kim and Joe who were off to work, and then we left the house just after 0800hrs to get the bus into Brighton.  At that time of the day of course there was heaps of traffic and at times it felt as though it would've been a faster journey by narrowboat which is saying something!

Arriving at the Railway Station in plenty of time to buy a coffee from a stall outside the station (from a kiwi funnily enough, they do know how to make good coffee I have to say!), our train to Victoria was delayed by about an hour as the incoming one from Victoria had been cancelled.  Once it was announced that the train was ready to be boarded there was a rush to get through the ticket barrier and onto the train which then departed within about five minutes, before the next scheduled one - we had to get the correct time as we'd got cheap tickets - luckily we made it onto the right train and breathed a sigh of relief - short lived though! 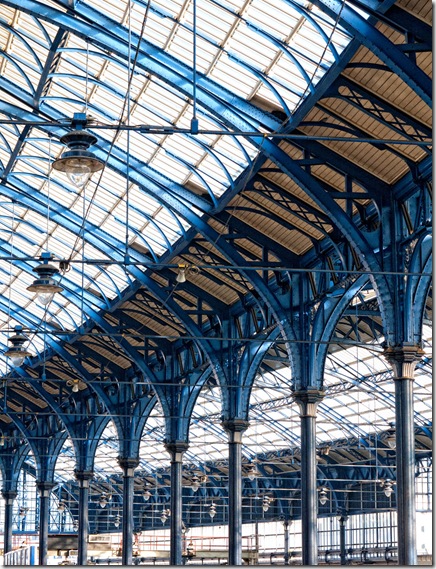 We departed at Clapham Junction for the link to Hemel Hempstead, having gone through Victoria.  Once on the train, that we'd had to wait 45 minutes for as we'd just missed the previous one because we were late, it was announced that we had to change and go to Victoria to get to Hemel Hempstead!  It was so frustrating and a journey that took us less than two hours on the way there, ended up taking us more than twice that on the return journey having to get another train back to Victoria, then the tube to Euston, then finally the connecting train to Hemel Hempstead.  Ah well, it wasn't as if we had to be anywhere at a certain time, the boat was there waiting patiently for us.

After a quick lunch we set off for Berkhamsted and a supermarket for supplies, only just over 3 miles away but with eleven locks to negotiate! 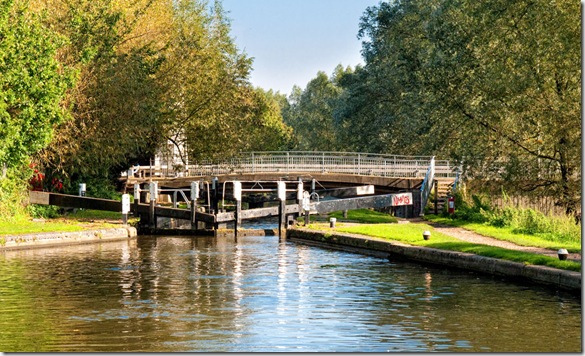 That's the first lock of the day done, only ten left! 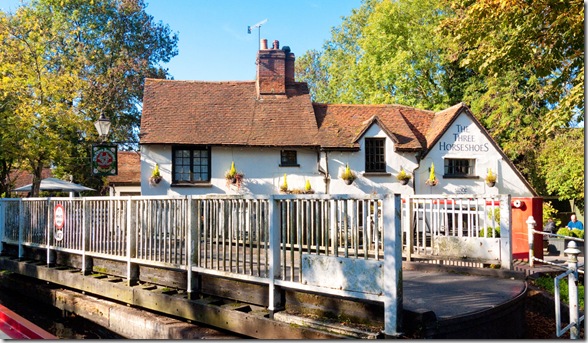 Winkwell Swing Bridge at Bourne End, beside the Three Horseshoes Pub dating back to 1535 and allegedly hosting two ghosts 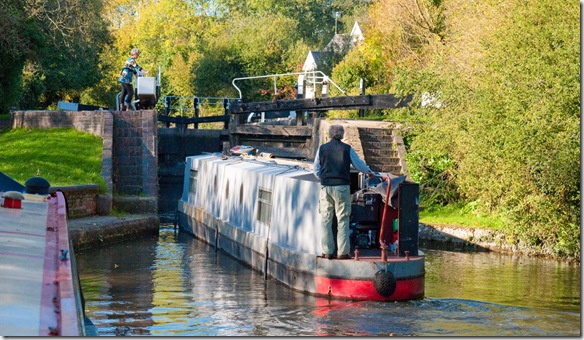 Sandra on lock duty - we shared locks today with the man we'd previously met, who moves boats around and does them up (sorry, forgotten your name!) 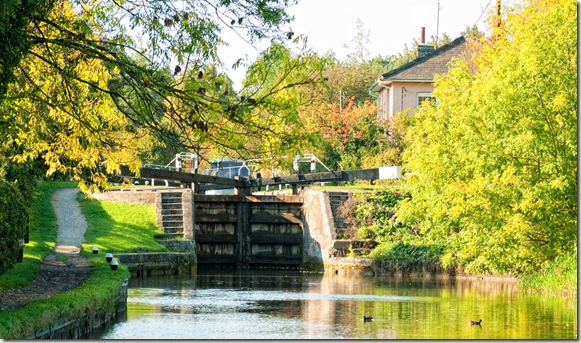 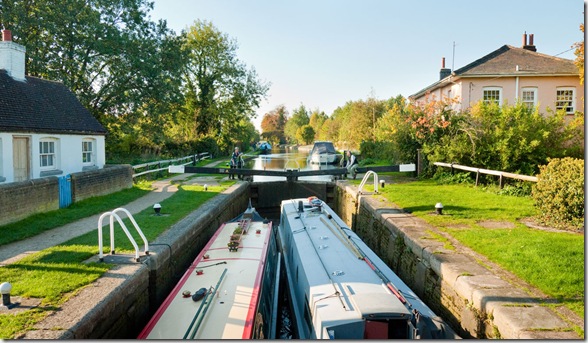 Snugly fitting into the lock side-by-side 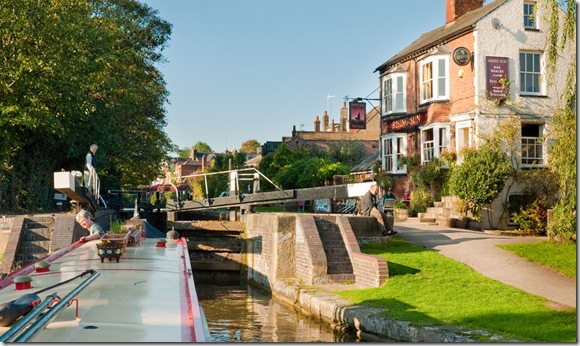 Trying to manoeuvre into the lock with just one gate open 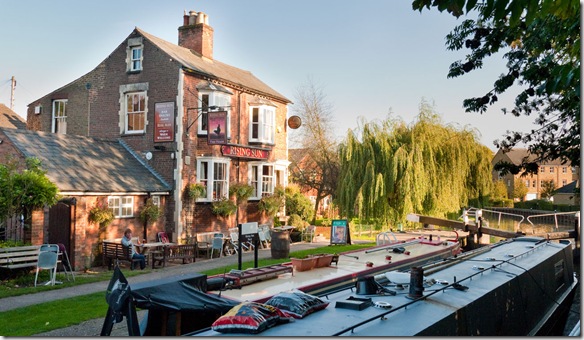 Made it, no problem! 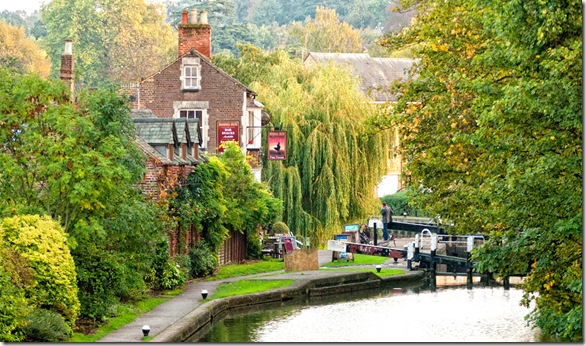 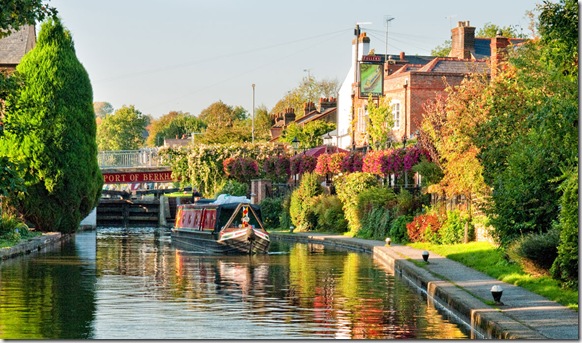 Berkhamsted on a sunny autumn day - such bright colours, nature can truly take your breath away at times 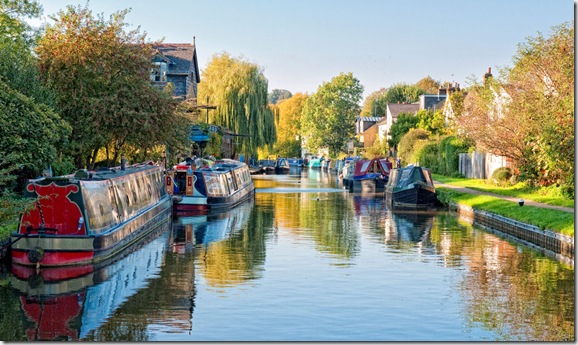 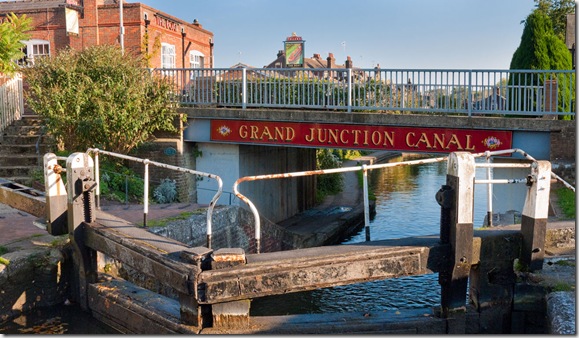 Embracing the canal - though the lock could do with a coat or two of paint! 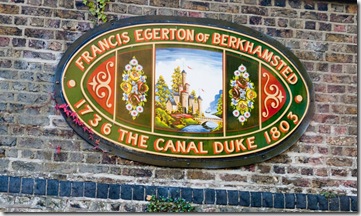 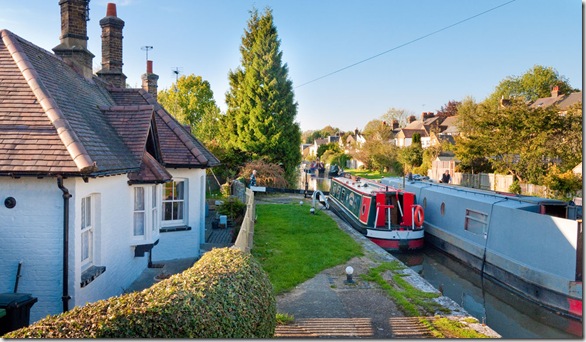 Northern Pride is swamped in the lock by the longer boat 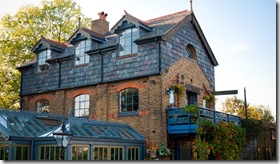 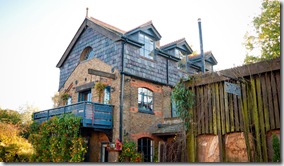 Bits and bobs abound on this house 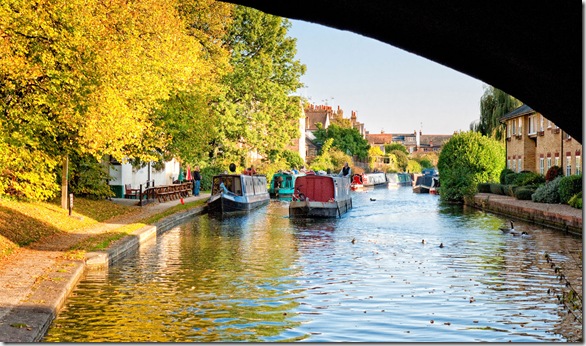 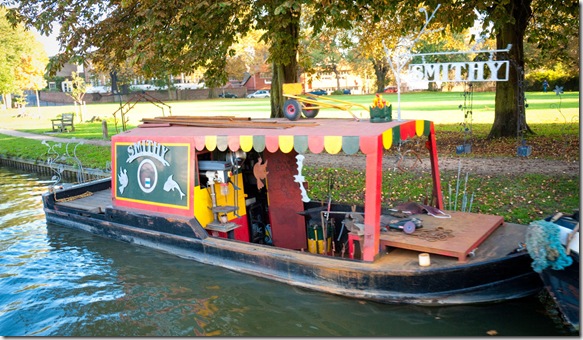 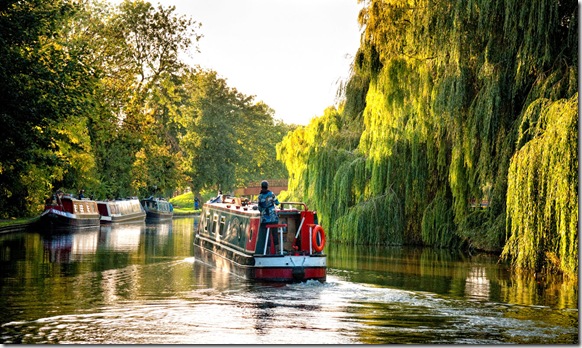 Barry must've been travelling on the wrong boat? 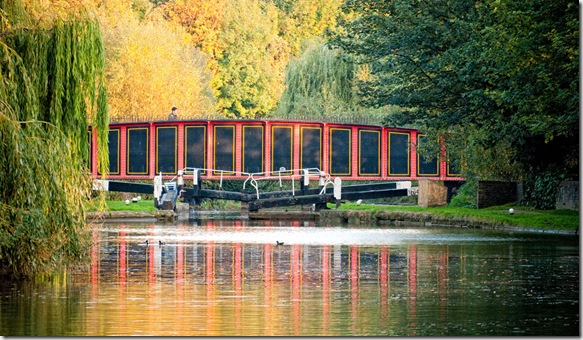 A great mixture of old and new ... 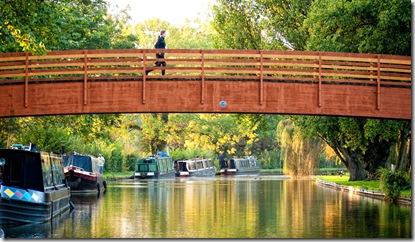 ... and another new bridge traverses the canal 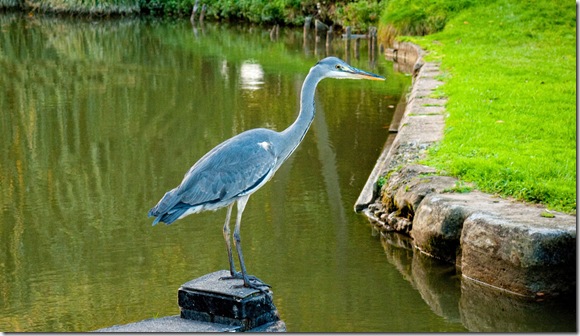 What a handsome heron - contemplating life 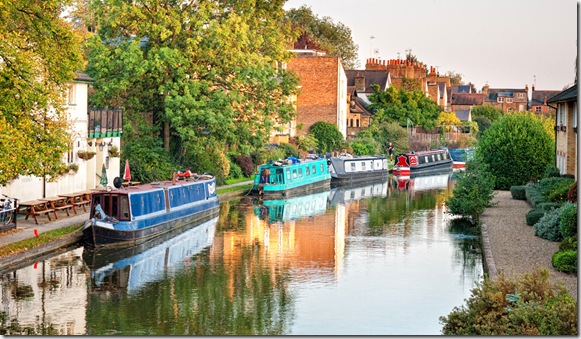 Not a bad way to live 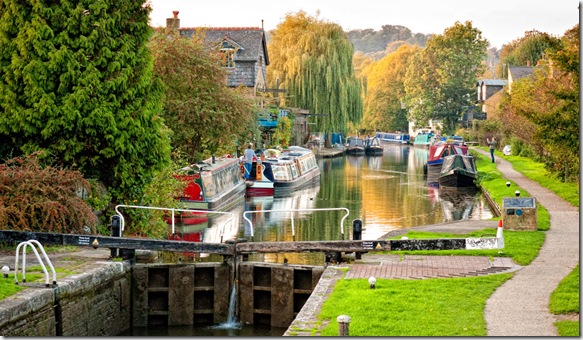 So many different types of trees here 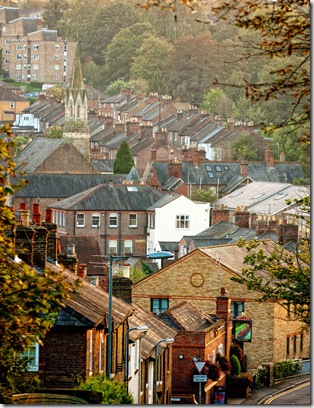 Berkhamsted - an eclectic mixture of shapes and sizes of buildings 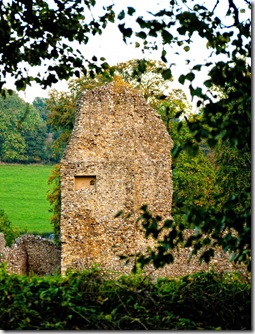 Barry went for a bike ride around the area once we'd moored up, and discovered the ruins of Berkhamsted Castle.  And so begins a history lesson ...

It seems that the story of this castle also begins with Duke William of Normandy, who we'd recently encountered defeating of Harold at the battle of Hastings on 14th October 1066.  Following this, William marched with his army through southern England, pillaging as he went (and possibly a spot of raping the local wenches I suspect!), crossing the Thames at Wallingford to reach Berkhamsted.  He was met here by the likes of Archbishop Ealdred, the Bishops of Worcester and Hereford, Earls Eadwin and Morcar, and the 'chief men of London' (they sound very important!), who swore allegiance to him and offered him the crown, so off he went to London to be crowned king on Christmas Day, 1066.

While Barry was off sightseeing, I did the boring part and made a trip to the local supermarket to buy some much needed provisions.

Tomorrow we meet up with Ellie and Mick from Australia, who'd been in touch through the blog and were over on holiday checking out the canals in readiness for their much longed for dream of living on a narrowboat for a year or more - check out their blog and progress on "Narrowboat Dreaming".