Heading to Hemel before a weekend in Brighton

Another delay on the blog as I've been travelling to Auckland and Wellington, and since our last entry the devastating earthquake and tsunami has hit Japan and put the scale of Christchurch's disaster into a different category.  Yet again, the message must surely be to 'seize the day' whenever we can, no-one knows what life has in store.

Though it's not a priority on the scale of things, we're still waiting to see the money from the sale of Northern Pride appear in our account in UK, which is rather worrying; despite an assurance it'd be in by last Friday it's now promised this week.  We're beginning to get a little concerned and hope that the company isn't struggling due to the economic climate in UK.

Just over three weeks of blog from 2010 to go.  We had a comment asking if we would continue the blog or be passing it on to the new owners - well for now we're going to complete our journey, once that's done we'll consider the options available.

We've got three days posts in one next, due to the fact that Barry has 'mislaid' some photos from 5th & 6th October, so we thought it'd be a bit boring with just writing!  You'll also notice that it's getter more challenging to label the photos that we do have, so if anyone spots a mistake or recognises somewhere, do let us know, it all just seems so long ago now ...

We mooched about on Tuesday as the weather was dry and fairly mild but overcast, maybe the shape of things to come in the British autumn. 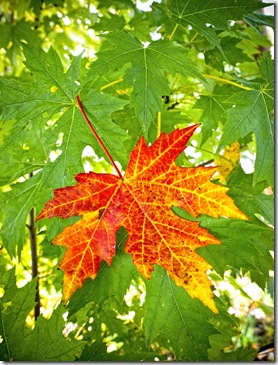 I recently read that in England there's an average of 60% cloud cover annually.  In contrast, Gisborne, on the east coast of North Island of New Zealand, where I chose to emigrate to five and a half years ago, boasts statistics of around 80% sunshine all year round.  I'm a  warm weather person, preferring sunshine and bright blue skies to the gloominess of a British autumn/winter.  It's a dilemma though, I miss the people of England, my family and friends, but now the pull to Aotearoa is returning - it's Barry who feels a  pull to England, but as yet he can't live here longer than six months.  We may come back for a few years in the future so he can get his residency, but nothing's planned as yet. 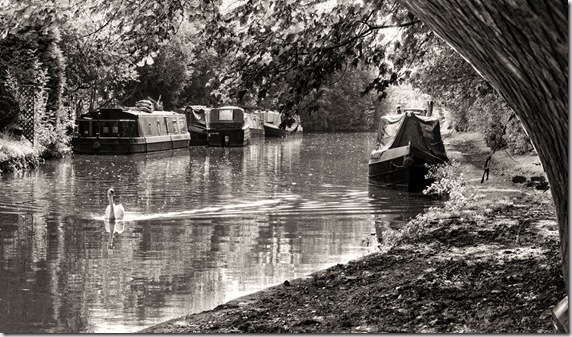 While moored up for a couple of days, Barry took the opportunity to put a new seal on the bilge pump which was wearing thin - we thought it best to get that sorted before it stops working and the boat sinks!  I planted some yellow winter flowering pansies to brighten up the roof of the boat for our final few weeks.

We had a late start on Wednesday, we'd meant to leave early but as usual our best paid plans altered!  The beauty of not having to clock-watch I suppose?  It was a glorious day, hurrah, with lots of locks before Hemel Hempstead, so I chose to enjoy the dryness and walk a couple of miles between two locks. 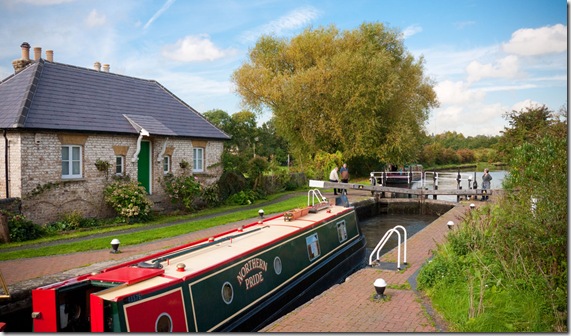 Sandra's at the lock, Barry's taking the photo - who's on the boat then?

We stopped at Bridgewater Basin Boatyard for a needed pump out, and had no choice but to pay £17 - we had three BW cards left but hadn't found anywhere to use them since the Kennet and Avon canal!We'd also stocked up on BW launderette cards back at the Black Country Museum moorings at the beginning of our journey, as we'd seen heaps of BW launderettes last year and had no cards.  Blooming typical isn't it, we haven't seen another one since!  Even after paying such an extortionate amount for the privilege of using the pump out, the cheeky man was extremely reluctant to let us use his rubbish facilities which I found incredible.  There really seems to be a dearth of facilities recently, heaven knows how long term moorers get on, though it's probably why we've noticed many rubbish bags strewn along the towpath in many places :-(

After a short stop for lunch, we did another six locks to be half way to this week's destination.  It was lovely stretch of canal, with lots of birdlife and at one stage there were four herons flying around and a number of Kingfishers - one ducked and dived into the trees and skimmed the surface in front of us teasingly, then even stopped for about half a minute on a tree yards from us, seemingly checking us out, before returning the other way.  Magical!  Sadly Barry didn't get to his camera in time.  Wednesday night we moored close to Hunton Bridge, which felt as though we were in an idyllic country setting yet we were less than a mile from M25. 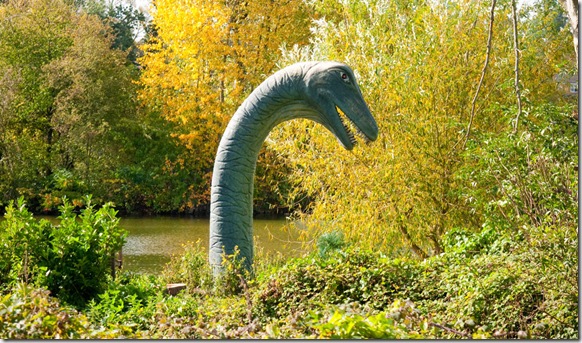 Lots of birdlife along the canal - oh and the occasional dinosaur! 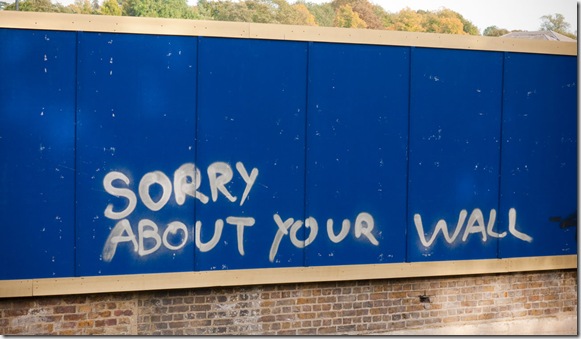 And some choice graffiti 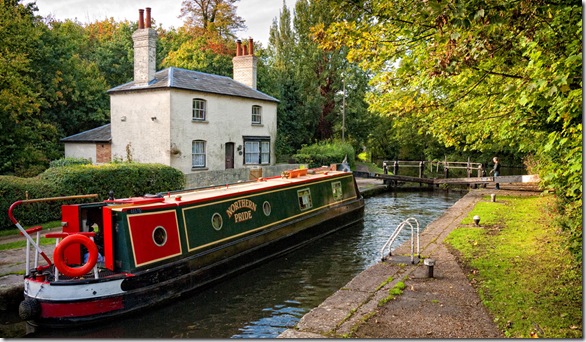 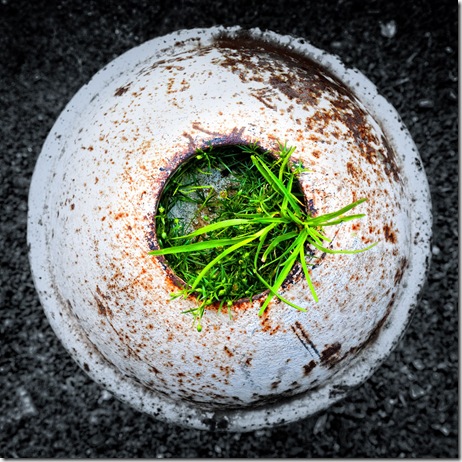 A roof garden on a mooring pin! 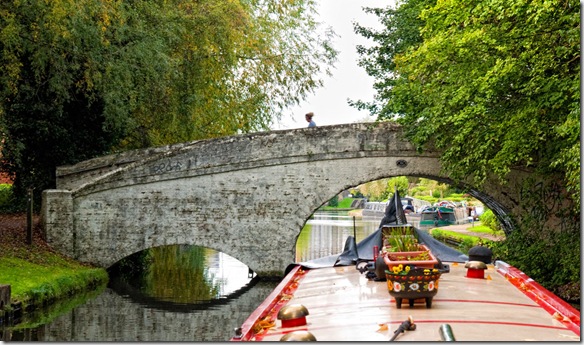 Beautiful bridges along the journey

On Thursday we travelled through another nine locks, with a lunchtime stop in Kings Langley.  Barry went for an explore on the bike while I made some lunch - he returned to tell me he'd found a Barber's and hairdressers there so off we went for a bit of a smarten up.  His Barber was a Greek man, in his 40's, with a rather younger pregnant wife.  He and Barry chatted so much that his hair cut took longer than mine!  I had a lovely bubbly woman, probably mid 30's, who asked where our favourite place had been so far on the canals.  I always find that a much more difficult question that what was the worst place - so I turned it round and said 'Blackburn' to which, bless her, she replied "I went to Blackpool once, it was awful, I decided then and there that I'm a southerner and have never gone north again!"  Hilarious!  Talk about a blonde moment, but it was an excellent hair cut! 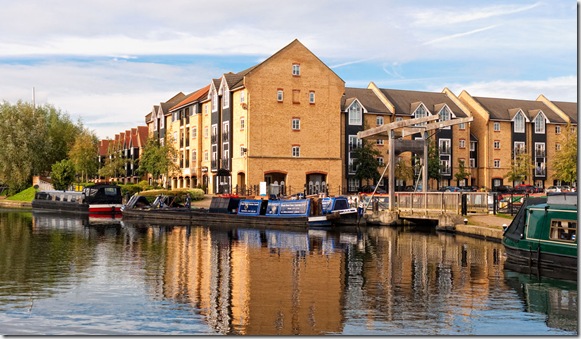 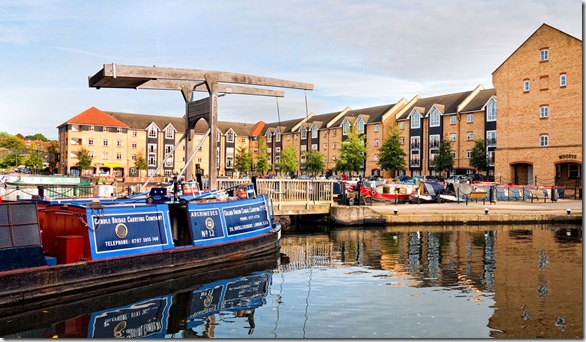 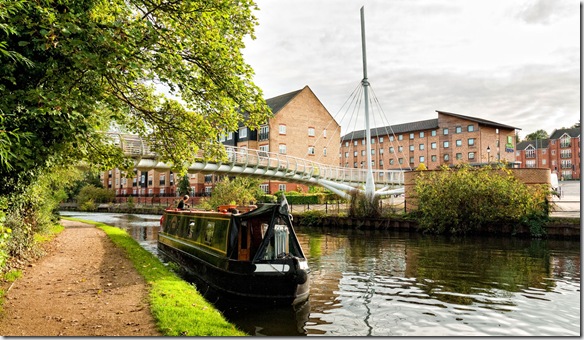 We moored up a short walk from the railway station at Hemel Hempstead, ready to catch the train to Brighton to see Kim and Joe for the weekend. 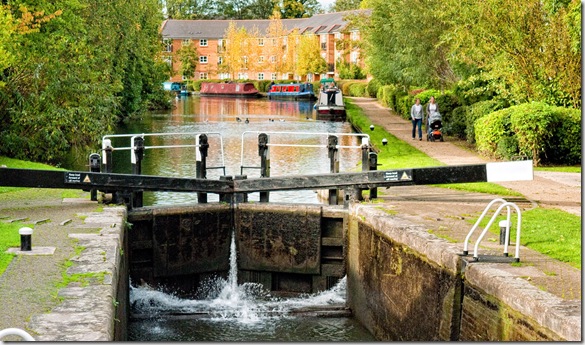