Tattenhall take two, more about life in the marina - and credit where credit's due!

In the previous post, I missed a very apt photograph Barry had taken, which shows the measure of risk we take on our walks into Tattenhall. There's a tiny piece of grass on the right hand side that we can jump onto when there's cars/trucks coming either side, to avoid collisions. The hedge is spiky, so there's nothing to hold onto! 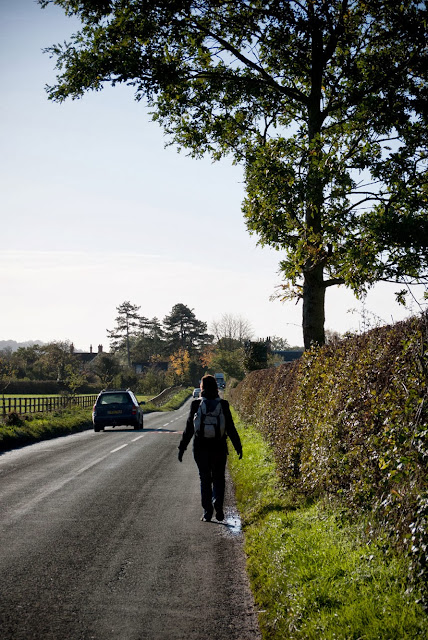 It's always worthwhile though. How fortunate are we to live so close to such a gorgeous village, with an engagingly friendly feel, well maintained and obviously loved by its inhabitants. 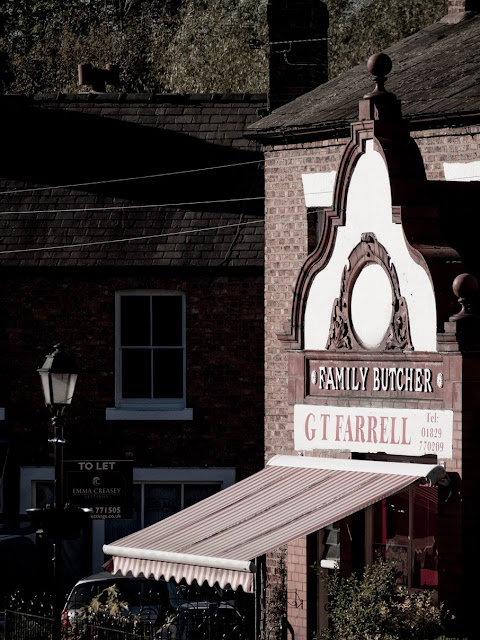 Life in the marina is peaceful, despite there being quite a few live-aboards around. We're managing to keep cosy with the central heating, the stove in the Boatman's Cabin and a small electric blow heater in the lounge/dining area. Admittedly I'm pining occasionally for the warmth of the New Zealand summer - it's my first British winter for nine years and it hasn't even officially begun yet so I'm remaining stoical whenever possible (Barry will disagree!). 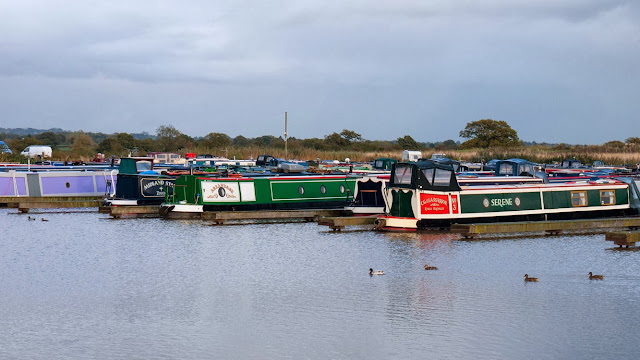 Every Saturday night at Scott's Bar, opposite our mooring, there's some form of entertainment. It seems to be on a rolling plan of quiz night, dominoes knock out, 'Play Your Cards Right', and shuffleboard (see below). We've experienced three of the four, sadly we'll miss Brucie's game this Saturday as I'm off to my parents again whilst Barry is jumping on the train at Birmingham New Street (so long as Enterprise collect us on time in the morning!) to go to Brighton for two nights to see his mate Dickie. We've also heard from Ray of NB Stronghold, that he may finally get to meet Barry in person on one of the evenings as he also knows Dickie. Watch out Brighton! 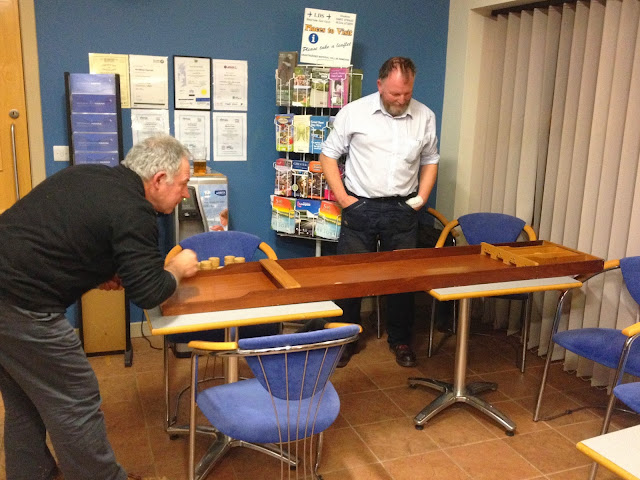 For a few weeks now, the starlings have been flocking each evening and providing us with the most awe inspiring sights. They fly in at dusk, then seem to get into formation for a while, then break off into groups, and finally they all swoop down and land in a small clearing. It's like they're attending a planning meeting to discuss the best route and destination to escape the cold British winter ... 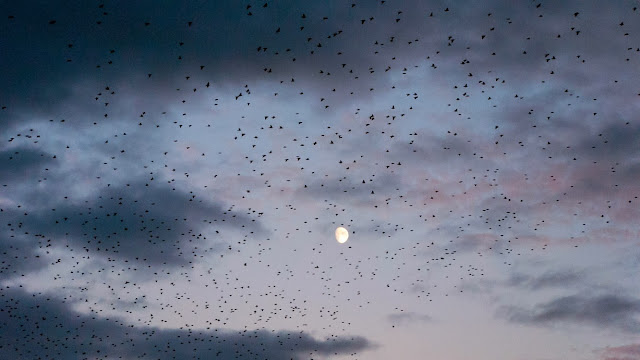 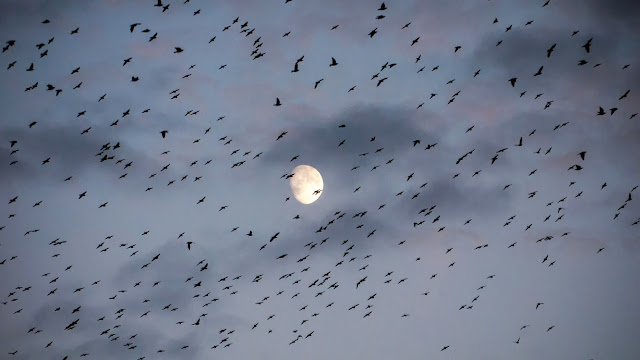 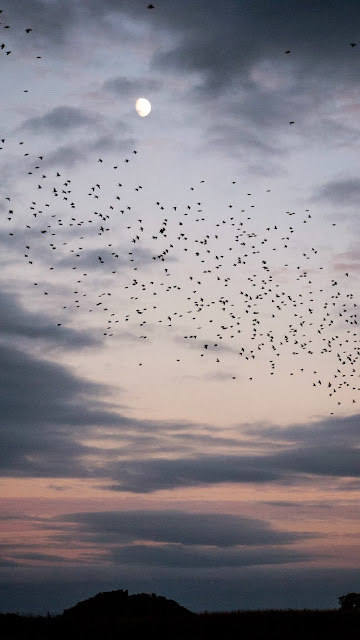 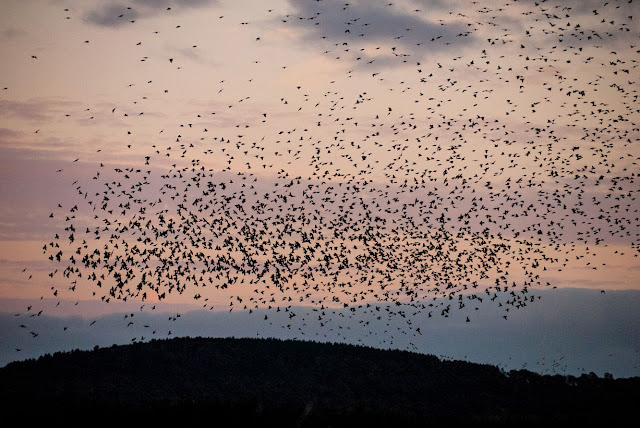 Our two resident mallards are frequently to be found almost knocking at the kitchen window, and I can imagine them quacking "Please miss, can we have some bread?" 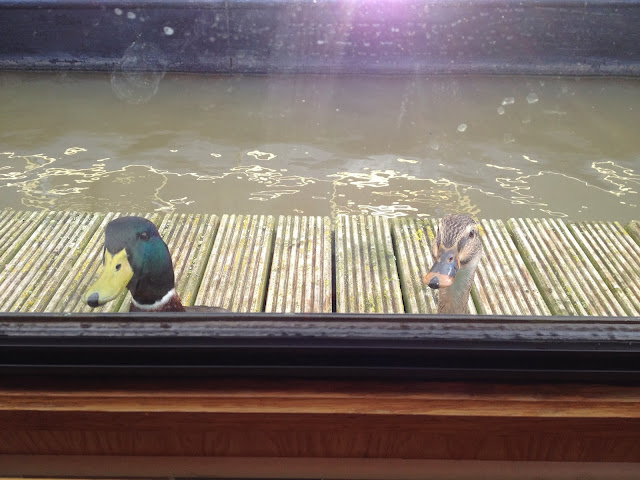 My Mondays and Fridays recently have been spent supporting my eldest daughter with our now two grandsons - so I hop on the 0815hrs bus, a ten minute walk away from the boat, for the twenty minute journey to Malpas. My prize for leaving the warmth of our bed at such an hour (I realise most people are generally up way before this!), is I get to watch the sunrise on a clear day. 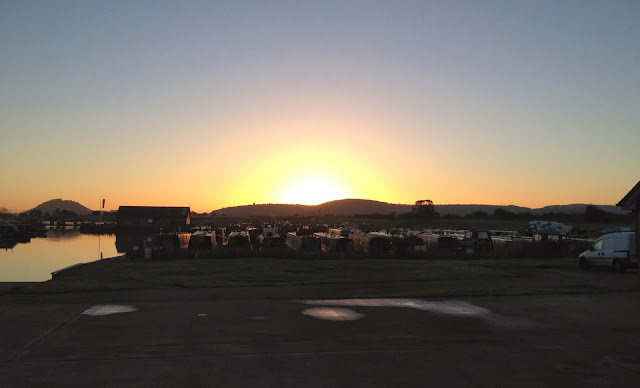 The sun rising on Friday - into a spectacularly clear blue sky ... 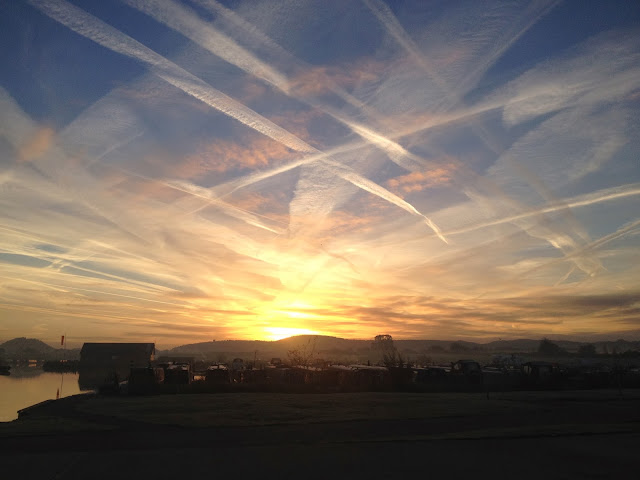 … the same view on Monday, three days later, the sun rising into a sky filled with criss-crossing vapour trails from aircraft - why is that? Different atmospheric pressure? Or is there a rush to fly away on a Monday morning?

Almost finally, here's the article I mentioned in the last post. Imagine my surprise to open up the page and see Barry and me staring back! Not what I was expecting at all. It's a colourful photo we adore, that epitomises our joy of being back on the waterways in April 2013, taken though by the very talented Andy Tidy from NB Wandr'ng Bark. We'd informed Waterways World that this particular shot was Andy's, but they have credited Barry on the side of the image.

On the contents page is a happy shot of Pam and Terry from NB Rooster's Rest, and we're reliably informed that there'll be another couple of pictures in the January issue. I'm not revealing who may appear then - as although we know which photos we supplied, we don't know WW choice yet, lol! 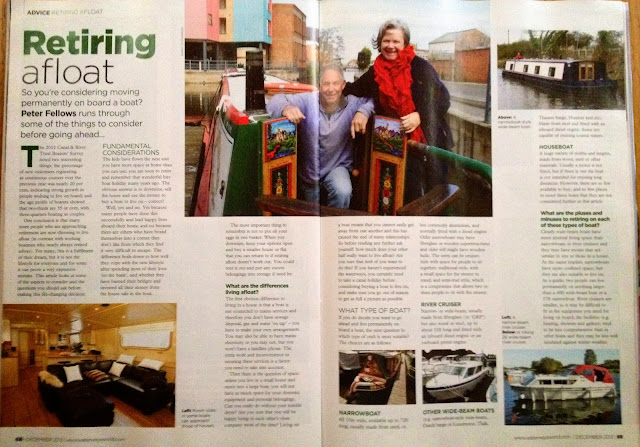 It's an interesting article about 'retiring afloat', although this edition mostly provided details of different boats to buy, rather than any interactions and/or instances of people's lived experiences of such a life. And you're right to be thinking we haven't retired - in fact we're not sure we'll ever 'officially' retire, and we're certainly not waiting to live until that man-made time and age.

Barry's been plugging away getting his new website up and running over the past couple of weeks, putting up shelves on board and making a top box; and we're just waiting to hear about a few set-up details before we can launch the details of his new business on the blog. And I may even reveal my plans for another small income stream which will work very well alongside his, during the summer months.

Watch this space ...
Posted by Barry and Sandra