We haven't moved far since our last blog post - as we haven't far to go!


Mooring in Middlewich on Friday, my daughter Lisa collected us on Saturday for a weekend with her, our son-in-law and gorgeous grandson. We visited the Cheshire Ice Cream Farm, a fabulous fun place for young children, and just a five minute walk from Tattenhall Marina where we'll be mooring until 1st March from this Sunday. So of course we went for a look and we're very happy with our choice and looking forward to 'settling in'. Well at least I will be - Barry will get to see it on Sunday night and then we have a hire car from Enterprise collecting us on Monday morning. I'll spend a week with my parents, then return to the boat alone which is going to take some adjustment but will be fine.

We have almost everything in place now for applying for Barry's UK residency visa, and our man in NZ, Colin from 'ivisas', has begun the form filling and booked Barry's biometric testing in Auckland for next Thursday, a few hours after he arrives there.  His eyes may be a little red after all the travelling!

We have an appointment in Chester for Thursday with a Notary Public to verify I am who I say I am, and for that we pay about sixty pounds!  We should have all the bank statements ready at my parents house next week as evidence we've had the amount needed in our account for six months, then all that's left is Barry's two passport sized photos.

I'm handing over to Barry once he's left - let's hope he succeeds in his application (which will cost NZ$1,745  for the application, plus NZ$1,000 to employ ivisas to ensure we get it right first time, plus Barry's flight there and back, plus all the paperwork and time) and returns soon.  Colin did inform us we could 'fast track' his application in ten days - if we want to pay another NZ$500! Er, no thanks! Anyway, Barry still has to sell the shop and catch up with his nearest and dearest who are all very much looking forward to seeing him again.

Today we're moving just a few miles and two locks to Bardbridge, which we expected to take us less than two hours. We bought Northern Pride from the boatyard at Barbridge in April 2009, so it'll be good to see the canal there again. We started out at 12, it's now almost 5pm, and we have yet to go through the second lock! Admittedly we just stopped for diesel, gas, a pump out and a water fill-up, but we've never experienced queues like there are here on the Middlewich Arm, nor as many hopeless hire boaters taking an age to negotiate the locks. 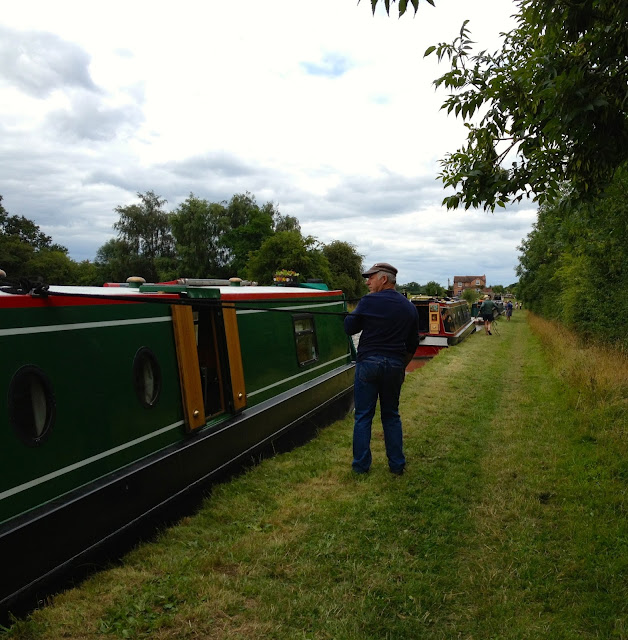 About ten boats ahead of us 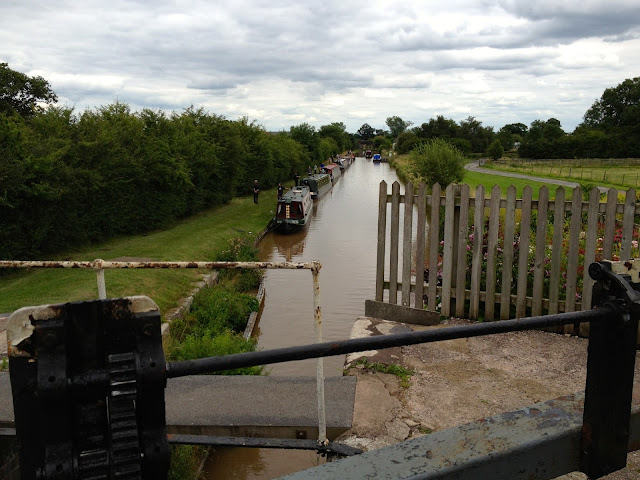 In the lock at last - following a hire boat driven (badly) in and out of the lock by a young girl of about 12, while her father walked the towpath - incredible!

We're meeting up with Tom and Jan in Barbridge this evening, and splashing out on a couple of drinks at the local pub - to swap visa tales and traumas! He was fortunate to get in before they changed the rules to five years.  Reading their blog post from yesterday, we can sympathise with the complexity of the UK visa process he and Jan are also experiencing.

It's very challenging to understand why it's so difficult to get Barry a UK residency visa.  We've been together seven and a half years, his father and grandfather both fought FOR ENGLAND, in Europe, having travelled all the way from NZ, in the first and second world wars respectively. Oh yes! And New Zealand is still a British Commonwealth country.  If anyone can enlighten us why we have to jump through so many hoops, we'd be most grateful.

However, it is what it is, and we know it's bigger than us so we're just ticking the boxes and spending an awful lot of money in the process.

We're hoping nothing happens to my dad while he's away, as, without the visa, he can't return for six months ...
Posted by Barry and Sandra at 16:39