A weekend in Welford

Saturday began with the promise of sunshine and a tease of warmth in the spring air, but progressed during the afternoon to showers and a biting cold wind.  Sadly Barry's left his Gortex raincoat at my parents house; he’s also managed to ‘lose’ one of his possum/wool gloves and a pair of Clarks black shoes (friends reading in NZ will not be surprised by this, he's well known for losing clothes in random places).  I suspect the latter were left in New Zealand due to limited luggage space and won’t be discovered until Barry returns there in August – though he swears he’s worn them since we’ve been here! Heaven knows where his lone glove is, maybe it'll turn up one day - I may have to put them on a string in future ...

I wore three layers to ward off the cold at the back of the boat – a t-shirt, a thermal long-sleeved top, a Rohan polar fleece, and a Kathmandu waterproof – half way through our trip I added my thermal leggings under my jeans.  As we've said before, there's no such thing as bad weather, just wrong clothes!

One of the delights of our new boat ‘areandare’ is the stove in the boatman’s cabin towards the stern (I had to ask Barry what the back of the boat is called, just catching up on boating terms, lol!), so at least Barry was able to keep warm by shutting the rear doors while steering the boat, even though he didn't have the right clothes, when I chickened out and hid indoors – I haven’t plucked up enough courage yet to take the helm, it was too windy I decided (!) 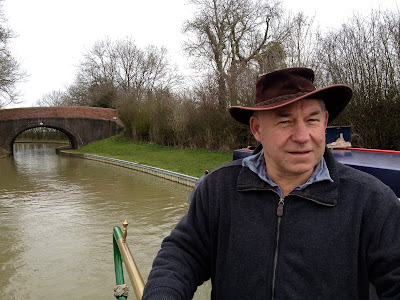 We managed to travel to Welford for the night, and made a brief visit to the pub in the basin after a hot chicken curry to warm us up.

It’s amazing to be back on the waterways, despite or in spite of the cold – we both had to pinch ourselves Saturday morning as it felt like we were dreaming.  It’s been a long journey back, with many twists, turns and challenges along the way, but we wouldn’t change a thing – though it’d certainly feel better for Barry’s business to be sold, but we’re sure that’ll happen when the time (or someone as yet unknown) is ready J

From Monday onwards, we’ll be focussing on ways of laying more foundations to get my Life Coaching business up and running, whilst meandering slowly along the canals.

Our next destination will be Foxton Locks, to have a chat with Sam Matts of Foxton Boats, about the engine and possibilities for reconfiguration to be able to use more of its power, whilst retaining the current appliances …
Posted by Barry and Sandra