Barry's daughter Jamie has now returned to New Zealand after her two-year stay in London, and is currently living with us while she makes plans for the next chapter in her life.  She had an amazing time and was very sad to leave the northern hemisphere, where she made the most of all opportunities to see an abundance of places and people around Britain and Europe.  She probably saw more than many British residents ever do, knowing she had only a limited time - a reminder maybe to those living there to 'seize the day' and get out and explore whenever possible.

Barry was asked to present at the Gisborne Camera Club's AGM, and duly did so on Thursday evening, after spending many weeks perfecting a slide show of a selection of his photographs, with suitably chosen and complimentary music, of our travels - one for 2009 and one for 2010.  They make captivating viewing and were well received he says and certainly make an amazing tool for marketing the waterways of Britain.

After having the warmest May since records began here in Gisborne, our weather is now turning much more wintry, and it's feeling gloomy, dark and cold.  We don't have 'central heating' as such down here, with most houses having either some form of air conditioning/heat pump units, oil-filled radiators and/or log burners.  We rely mostly on our log burner and electric blankets to keep us warm, and I have to say that despite it not heating up the house as well as British gas heating, it feels far more healthy and less 'stuffy'.  The downside of course is that we can't put a timer on the fire being lit before we get out of bed in the morning!

With just over a week left in England, we were pleased to see the sun shining this morning and a blue sky, though of course it was still extremely cold.

Barry had a limited time left to complete the work he wanted to do on the boat, so continued working at the bow, while I drove the boat up to Cosgrove where we stopped for lunch. 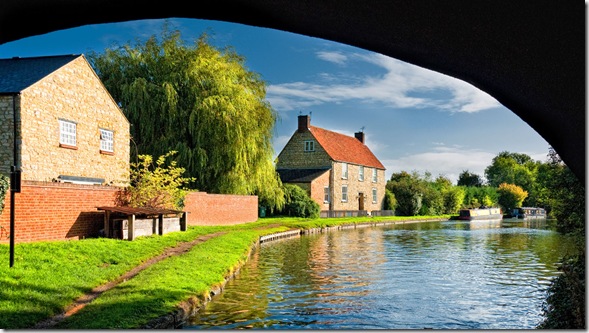 The view looking back from under the bridge at Linford 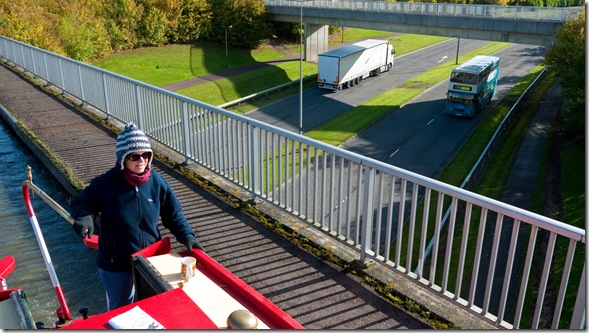 Over the aqueduct crossing the very busy Grafton Street, heading into Milton Keynes 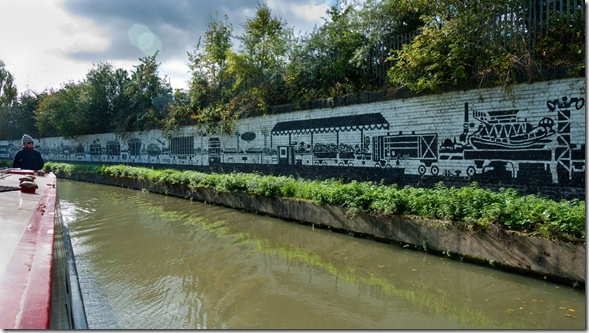 An interesting railway mural along this wall 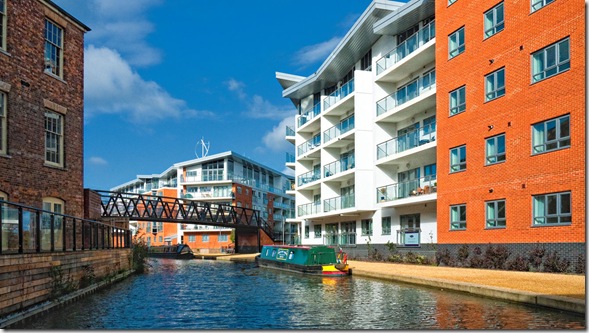 New housing developments on the outskirts of Wolverton 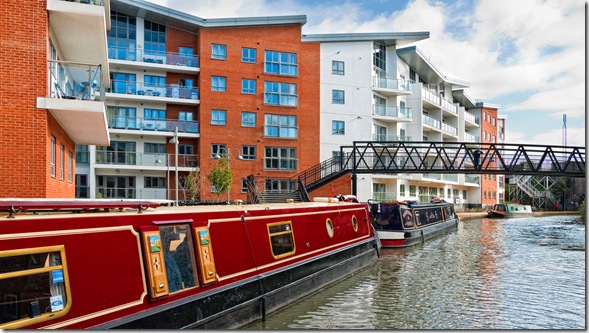 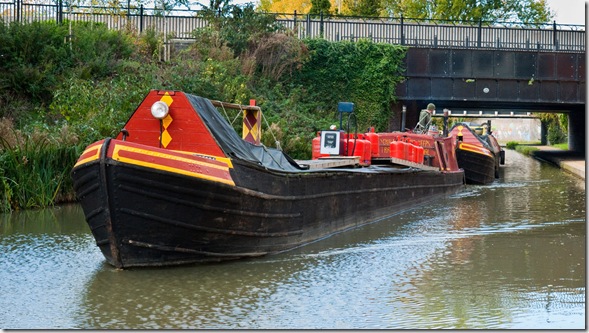 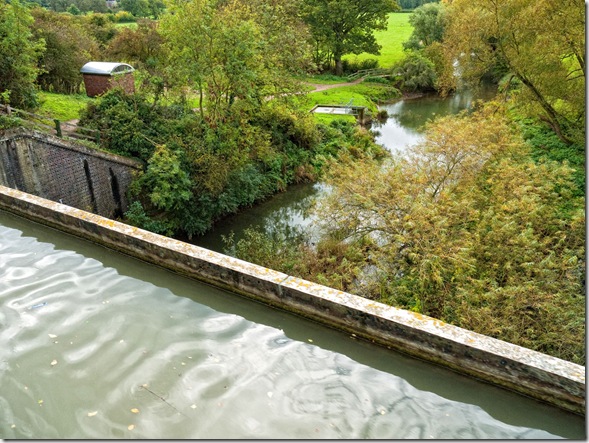 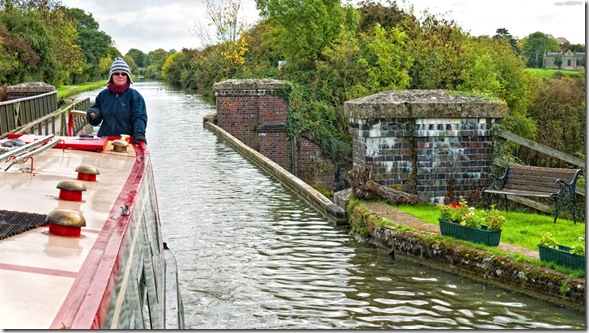 Not a lot of Sandra to be seen!

Taking a walk along the towpath to find a store for a few provisions, I noticed there were posters everywhere relaying that the body a man aged 46 years, a narrowboat owner, had recently been found drowned in the canal and they believed he'd died sometime between 24 to 27 Sept.  I wonder if there were some suspicious circumstances there?

As we went through the one lock of the day, the heavens opened and didn't stop for an hour or so - it felt like I was in Antarctica standing on the back of the boat!  Luckily there were very lovely surroundings to take my mind off the cold, one of which was a delightful Gothic bridge, close to the Georgian Cosgrove Hall.  No-one seems to know why such a stunning bridge was built over the canal, maybe it was to impress people going to visit the Hall in days gone by?

We passed many boats that appeared to be moored up ready for winter, reading intermittent signs advertising winter moorings between 1 Nov to 31 March - not long to go now before the stoppages. 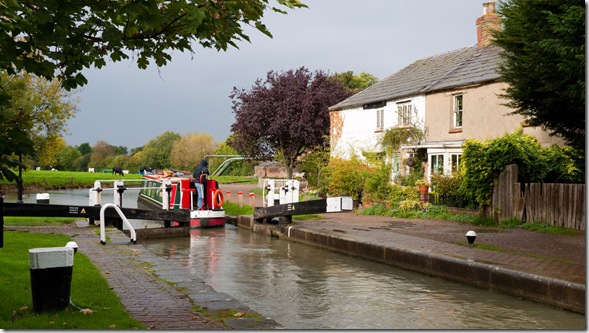 Cosgrove Lock - the only lock of the day 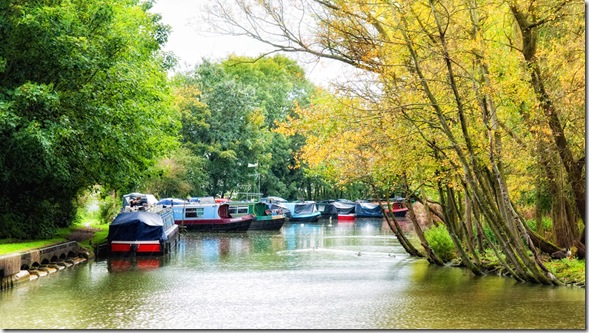 Looking back down the arm of the disused, and long abandoned, Buckingham Canal 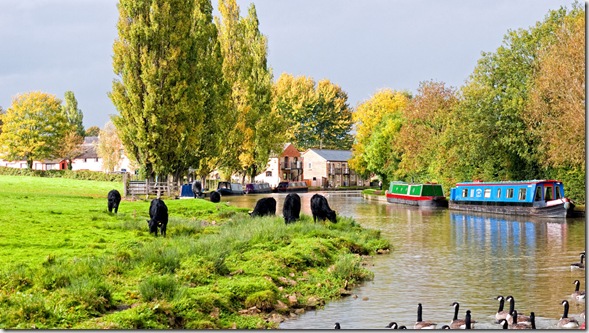 Approaching the village of Cosgrove from the lock 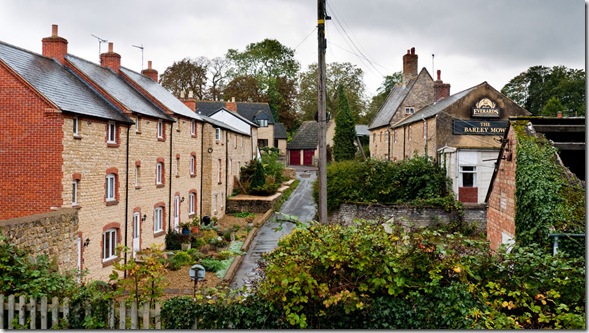 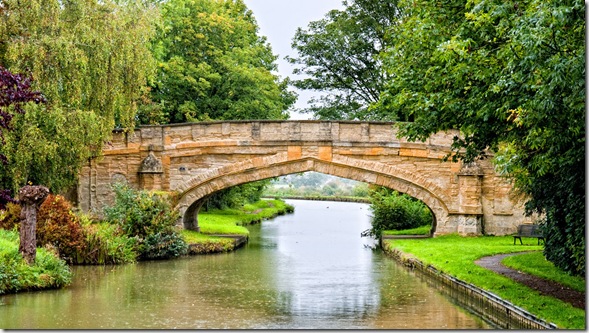 The only other link is across the elaborate, Gothic style, Solomans Bridge, built in 1800 ... 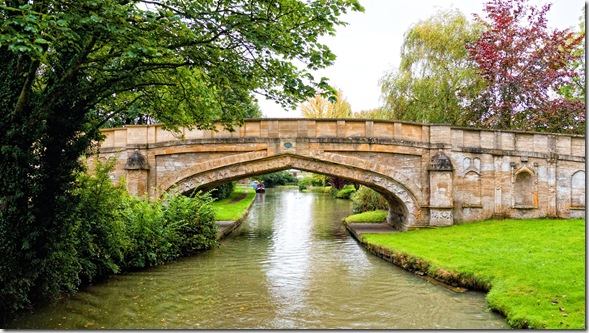 ...and the view from the other side

Barry became terribly bored working away inside, his 'anti-rust' paint wasn't drying quickly enough, so he ventured outside and forced me to leave the tiller so that he could drive the boat!  His excuse was that he thought I must be cold, but in reality I knew that he just wanted to savour every last moment as the captain of his ship, bless him.

Just after 1500hrs the sun popped his head out again, lighting up the way as we headed to Yardley Gobion to moor up and meet with Dave and Sue that evening. 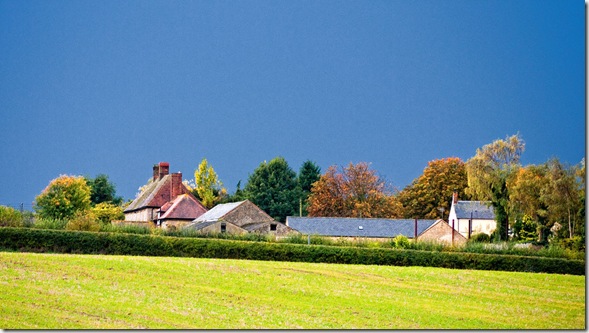 Manor Farm at Yardley Gobion as seen from the canal 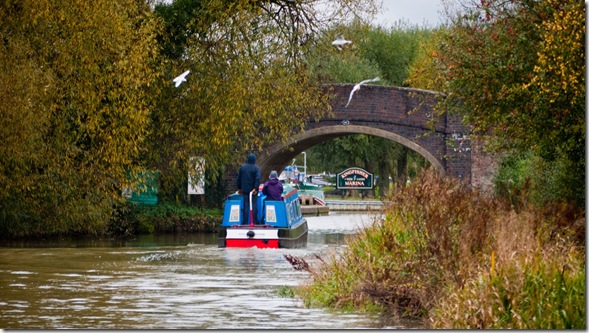 We walked into the village in the dark and found the pub we'd arranged to meet them at - rather oddly named The Coffee Pot, but a very lovely old-world establishment.  We had a great catch up, Barry hadn't met them before, whereas I'd known them for over 40 years.  As a child of around nine or ten, Sue and I used to go to Evesham with her parents some Sundays and play on the green by the river - I remember reminiscing about it when I was 'marooned' there in June 2009.  We may look a little older, and be much wiser, but hopefully our sense of fun remains. 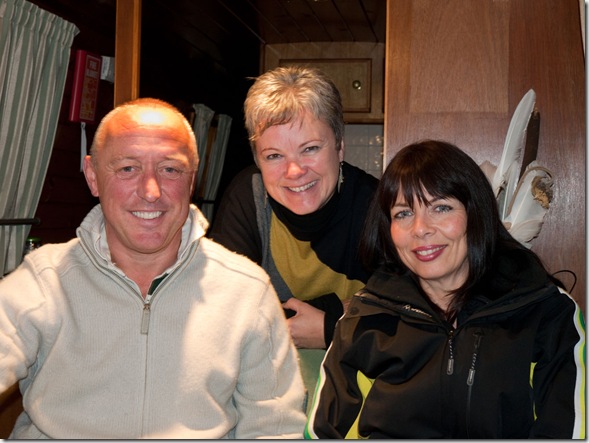 Dave, Sandra & Sue after a night out at the local - fabulous to see you both again