We weren't up late this morning as Tom was catching the train into London.  I walked down the boat and felt a little uneasy, it was tilting ever so slightly portside and when I looked out of the window I was rather concerned to note that there was a brisk flow to the river.   Barry soon jumped on his bike to check out the lock at Enfield.  Meanwhile, I went outside to investigate and was mortified to see how much the boat was tilting so grabbed Barry's camera and took a couple of shots ... 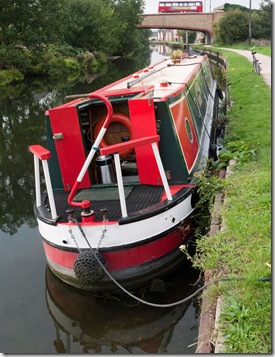 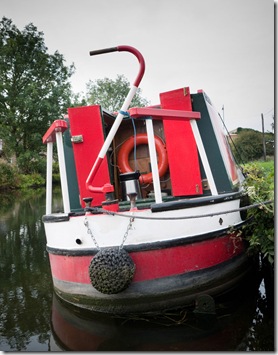 The poor rudder was actually on the bed of the river so we weren't going anywhere.  Eventually Barry came back with an incredulous expression - he'd found some bloke at the lock with all the paddles open saying that the pound he was in was low due to a boat during the night leaving the paddles open on the next lock - aaargh!  The ridiculous part of it was that his pound was about three miles long, whereas the one we were moored in was less than a mile - it doesn't take a genius to work out that he was never going to make a difference to his pound while he drained ours!  Amazing!

Barry strongly requested that he stopped draining the water and cycled up to the next lock to let a bit of water in, but the pound above that was only half a mile long so wasn't going to make a lot of difference.  We contacted British Waterways to be put through to an answer-phone, but after a few attempts eventually got through to someone and told them of our predicament.  After the call we noticed the water rushing away and the tilt getting worse again, so Barry was back on his bike - it was just the boat and crew who'd been emptying the pound coming up the lock.  At least they had the decency as they came past us to stop and help us to get floated by revving his engine and increasing the flow around the stern.  Thankfully we were able to move into the middle of the river and travel a short way to moor temporarily in deeper water not far from the lock.

Barry then managed to get Tom to the station to go to Tottenham Hale (where we'd meet up with him later) and then catch the underground to London for the day, and as he'd spotted a launderette not far away Barry took a couple of loads of washing there.

Our plan was to get to Tottenham Hale mid-afternoon where Freddie was going to be, little did we know what lay ahead ... 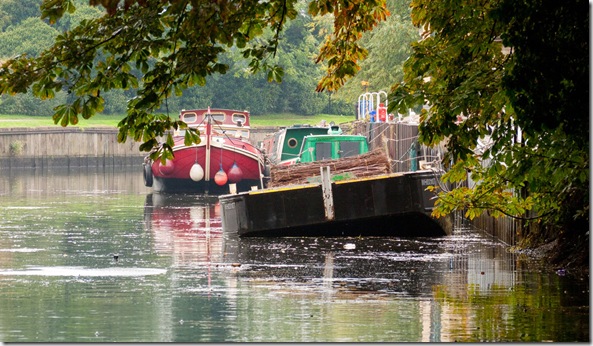 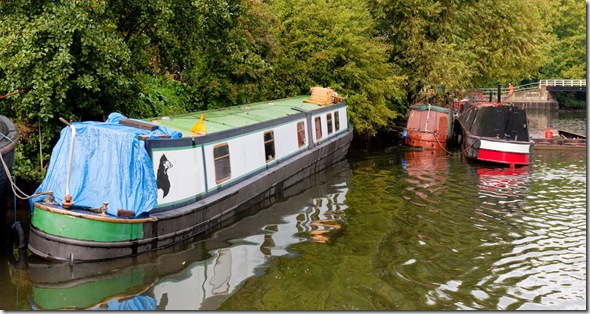 Descending Enfield Lock and thinking we'd have plenty of time to get to our day's destination, we saw the devastation that a selfish boater had left from his antics the night before.  Beached boats were everywhere, it wasn't looking promising!  Turning a corner we happened upon a boat anchored in the middle of the river - NBHobo.  He said he was sitting waiting for the levels to rise, having been apparently informed by 'the man in the Marina' to leave the paddles open on the previous lock as BW wanted them open as they were doing some work and would then be refilling the pound.

This seemed a bizarre and somewhat unbelievable tale so I called the chap from BW who we'd spoken with earlier - "No way," he said "it's nothing to do with BW, someone's having a laugh and we'll investigate."  When he returned the call he said that someone else had left the paddles open, since the boater the night before, but it had nothing to do with BW and they'd now have to get someone to travel miles up the river to re-fill the pounds so we could be stranded for a while.  It's a surreal feeling to be stranded in the middle of the river in the mud, unable to move ... 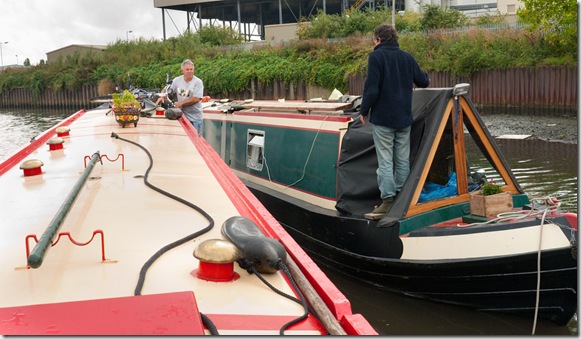 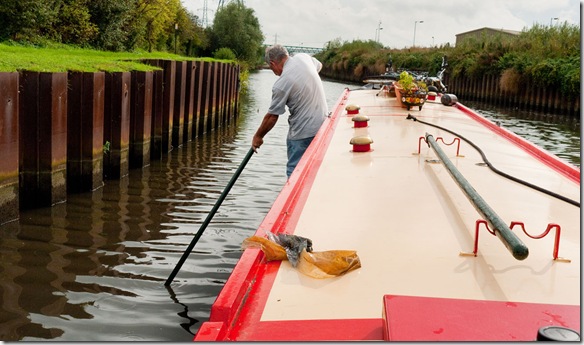 Not only were we stuck, but Barry had to clear a wedge of plastic from the prop as well 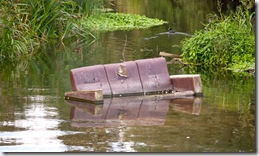 Of course by this time Freddie had arrived at Tottenham Hale and was now on his way up to Enfield as we weren't sure how long we'd be stuck.  Eventually Barry managed to get us to the side so he could get off and pull the boat along by the ropes which freed us after a lot of pulling and tugging. 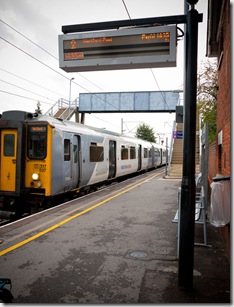 Fred got to Enfield 1634hrs and Barry managed to get to the station and bring him back to the boat while I sat on board wondering what other calamities were coming our way!

Somehow we subsequently managed to negotiate the remainder of the pound, very carefully, en route to Tottenham Hale.  We'd calculated it would only take us a couple of hours, but of course today all the locks were against us and when we moored up it was just before 2000hrs, very dark, and Tom was already waiting on the towpath bless him, after an exhausting day walking the streets of London. 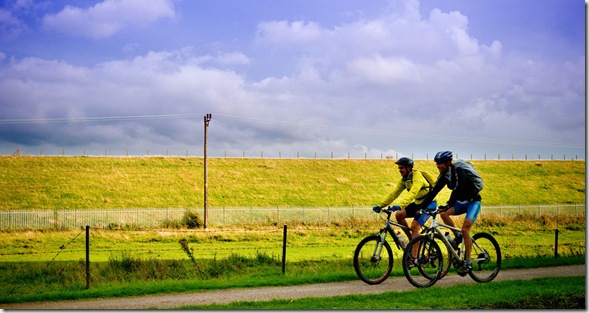 At least the weather wasn't too bad along the way 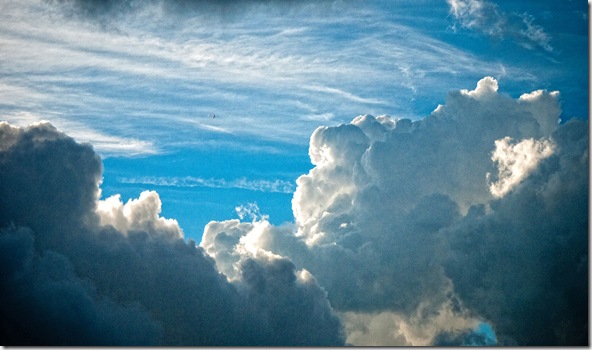 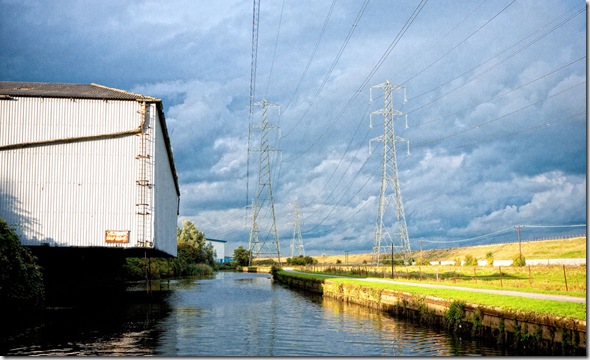 ... and an abundance of power lines 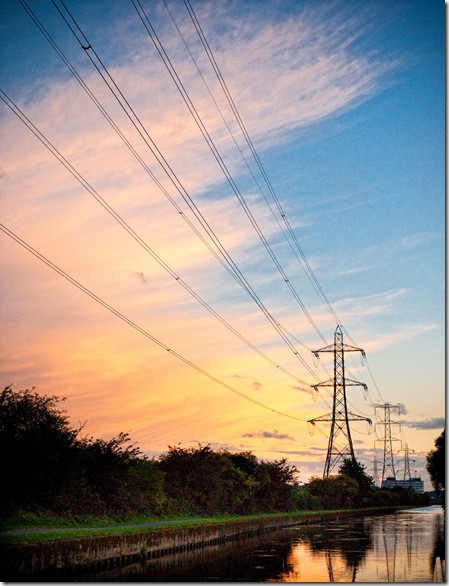 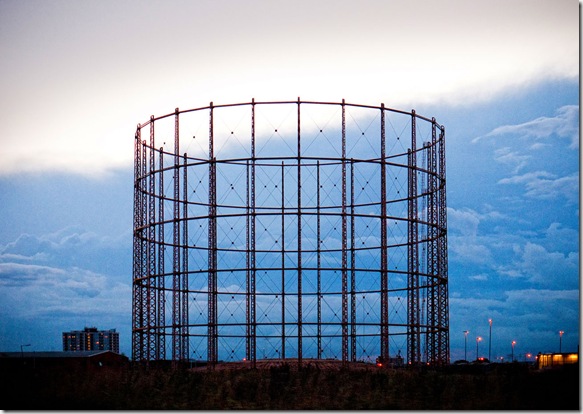 Gas towers dominate the skyline competing with the pylons 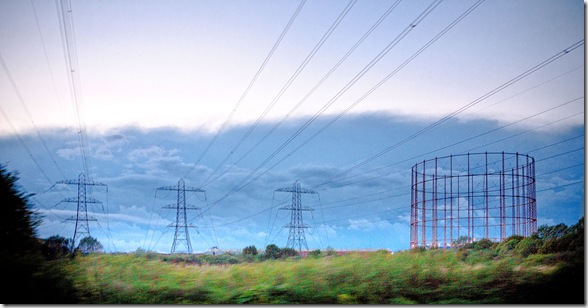 Something for the 'Pylon and Gas Tower Appreciation Society' - if there's such a thing??

Now with four people on board we had hardly any provisions and needed to visit the nearby Lidl's but the day's events hadn't quite finished - the store was normally open till 2100hrs but for one night only was closed at 2000hrs due to work taking place in the shop!  Typical!  Ah well, unfazed we had no choice but to visit one of the many fast food places around the bustling roundabout of Tottenham Hale and settled on a couple of pizzas! 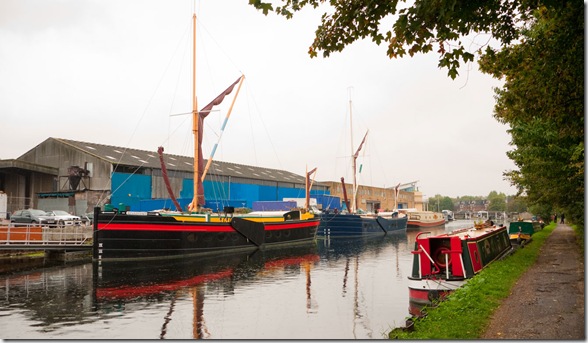 Moored back at Tottenham Hale for the night

Exhausted after our day's events, we had a quiet night on the boat - pizza washed down by copious amounts of boat brew. 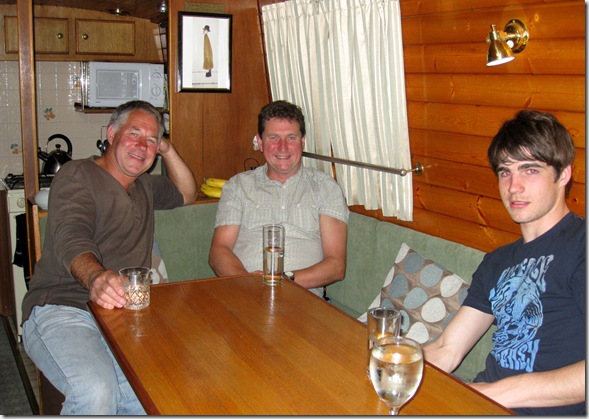 Barry, Freddie and Tom still smiling after a long and eventful day