My last post ended with reference to Barry's new job which begins on Wednesday - just one day left!  It's going to be a little strange for him after running his own business for about 26 years, to be working as an employEE rather than an employER, and as a cellarhand at that for a minimum wage.  But beggars can't be choosers and it fits in with our plans as it's just an 8 week contract.

The irony of Barry working in a winery won't be lost on those who know and love him; he could never be accused of being a teetotaller!  I'd insinuated that he'll be like a pig in s--t and it reminded me of a story he recently told me about the origins of the word 'shit'  that he'd read in a book my mum sent from England for his birthday (when you think about some of the words in the English language you've got to wonder how they came about).  He's building up quite a collection of quirky books about what it is to be in England.  The latest one is called 'The old dog and duck: the secret meanings of pub names' by Albert Jack (can't imagine why my mum thought he'd enjoy it!) and there's apparently a story in there which describes how, many years ago, raw sewerage would be collected by 'night soil' men, and, along with ash from the fires, would be made into blocks and used as fertiliser.  Somehow, unimaginable really, there wasn't enough for their requirements so extra supplies would be shipped in from abroad.  Originally they stored the blocks on the floor of the ships, but inevitably some became wet and would go soggy leading to a build up of methane gas so if anyone struck a match there would be random explosions, blowing up the ships.  Consequently they were eventually stored in bags higher up the ships to try to prevent them becoming wet and the fumes from rising.  The bags were labelled 'Store High In Transit ', the acronym of which spells, yes you guessed it!

I must find some time to read the book, having digested just a couple of pages in a few spare moments it's fascinating.  We often laughed at the names of pubs on our journeys around the north of England and were curious as to the meanings of them (I won't repeat Barry's jokes about distances and 'The Cock Inn', definitely not original!).  I suspect he's enabling me to see my home country in a new light, such is his passion for it (yes Andy, you're correct, his heart is in England - but funnily enough he only aspires to live on the canals there, not in the 'real' world thank you very much!).

We've just had a great weekend away at The Mission concert in Napier and boogied on down to a Motown party with bands from the 60's and 70's including The Temptations, The Miracles, The Four Tops, Martha Reeves and the Vandella's and Mary Wilson (of the Supremes fame).  It was fabulous to have four days together (that's in succession and with Barry!), we're going to be like ships passing in the night once he starts full time work next week. 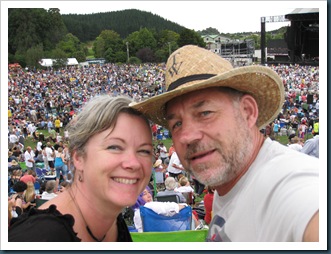 But that's OK, we'll have at least five months of living in close quarters back on the canals come May, so it'll all be worth it.  Life is short, Carpe Diem ...