Northern Pride and the kindness of strangers

Barry has started his first 'proper' job after selling his photography business in September 2008, and is working for Montana wines running the centrifugal CT6 separation system (!!) which separates the water from the grape juice for the production of low alcohol wines (are you with me so far?!).  This machine is designed to spin the grape juice under heat, in a vacuum, to separate water from the juice.  A part of this process will be low in alcohol and used for cheaper wines and grape juices, whilst the remaining, more concentrated part, will be used in higher alcohol production.  Those in the know will understand that more sugar in grapes = more alcohol in wine, and it's imperative to get the timing right to harvest the grapes.  During the process more sugar may be added, but it's considered cheating and definitely frowned upon in the winemaking industry which is such an inherent part of New Zealand culture!  Another way to increase the alcohol content (so Barry reliably informs me) is to use lower 'brix' grapes, and separate the water from the juice.  The current challenge apparently, after working for two days (well one full day as the harvest has been put back a week due to previous heavy rainfall!), is that the CT6 machine, which is obviously crucial to the process, isn't working!  Fingers crossed they get it sorted by Monday when he should commence full time as a vintage cellarhand. 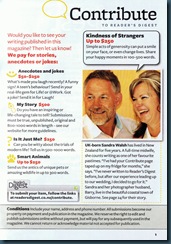 Our other exciting news is that the story I submitted in November to the Australian/NZ Reader's Digest, has been published in the March edition that we received today.  Of course it is (extensively!) edited from my original submitted article, the wordage being reduced at least by half (the fewer words the less money paid!!), but the general idea is there and the really cool thing is that a photo of Barry and I is featured on the 'contribute' page.  The story describes the people in the two boats who so kindly stopped and jump started us - our guardian angels - when we were stranded close to Rugeley, on the Trent and Mersey Canal, towards the end of our travels in 2009 on our way to Bodymoor Heath for our English wedding.