We've almost finished getting Northern Pride ready to be left for the winter on her mooring.  Barry's been grinding and painting, and generally making sure she's as sound as possible externally, while I've been packing, sorting and cleaning the inside. It's similar to getting your house ready to sell - it's always at it's best when you leave it rather than when you're living in it!

Last night we had Joy and Bruce on board, the couple who are very generously letting us use their end of garden mooring in Amington (of course we have to pay BW for the privilege!).  They had their own narrowboat that they sold a couple of years ago, so are well versed in what maintenance will needed during the coming months, and we're confident that she'll be well cared for.

Here's a few more shots from the wedding - expertly taken by Tim, my second cousin-once-removed-in-law (something like that anyway, it all becomes complex trying to work out relations)!!  You're a star Tim ... 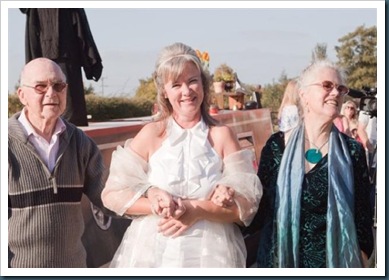 Being escorted to the boat by my amazing parents 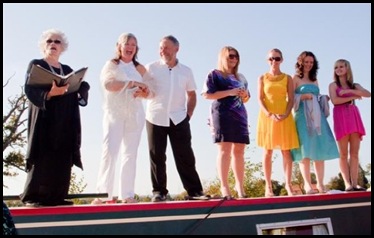 The wedding party, on the roof of Northern Pride, with Margo the 'la la' celebrant - the bridesmaids are in the colours of my engagement ring: yellow, blue and pink sapphires 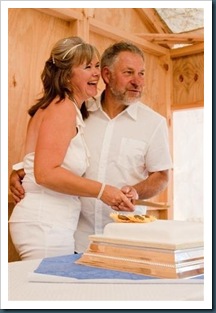 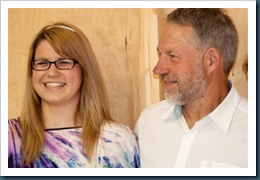 Barry and Jamie - don't they look happy bless them?

We cannot believe that our Six months in a leaky boat (Split Enz song, lyrics below - actually as far as we're aware the boat isn't leaking and will still be afloat when we return!) has come to an end, but we're pretty confident that we've made the most of every minute while we've been here.

Our journey started two and a half years ago when I brought Barry back to England for a holiday and he requested that we hire a narrowboat.  He'd spent six months in England in 1976 (remember that really hot summer?) and had come across the Norfolk Broads on his travels and saw the boats there and thought that it looked like a really neat existence.  We holidayed in April 2007 (hottest April since records began!) from Tardebigge, and completed the Birmingham Ring in four days - he was totally hooked.

Two years ago almost to the day (my birthday party 2007), I recall one of his good friends telling me that he'd been talking seriously about his dream of coming to England to buy and live-aboard a narrowboat, and I have to admit I originally believed he was crazy, never imagining that it would work out.  Ironically it had been my dream to emigrate to NZ, so the thought of coming back to England for six months wasn't terribly appealing to me at that stage either!

Barry's hope was that we'd be here last year, but for one reason or another that didn't happen which just made us even more determined, and once here we've embraced every magic moment.

Barry had read waterways blogs for months prior to his dream becoming a reality, and we're very grateful to fellow bloggers for all of their information, particularly Granny Buttons, aka Andrew Denny, whose blog Barry soaked up like a sponge.  Thank you Andrew.

Writing our blog has been a fascinating experience; experimenting with Barry's amazing photography, and trying to hone my writing skills.  We've had some very moving feedback from people in England, America, Australia and of course our home country New Zealand, and we thank you all for your kind words - it's been so touching.

We've met an array of folks along our journeys; some old friends and some new, and we hope you'll all keep in touch.

We're now completely hooked on blogging and will continue to write; we're just not sure how often or in what form as yet.  And of course we'll continue to follow narrow-boating blogs while we're back in NZ - poor Barry is going to be bereft to be away from 'the cut' so he'll be logging on daily I suspect, while I'll be back at work probably six days a week, at Gisborne Maternity Unit.  OMG!