On our way at last!

Hurrah! We are away at last on our journeys and my cold is improving – man cold indeed! For someone who is rarely unwell and hasn’t had a day off work sick in years, being struck down with painful ears, throat and blocked nose and sinus is not pleasant and yes I have been feeling very sorry for myself!

We don’t have much internet coverage at the moment, out in the sticks of Cheshire on our way into Wales so our blogs may be a little sporadic.

We left Barbridge Marina yesterday; the boat safety man couldn’t get to us until Sunday so we are going to meet with him on the way to Llangollen somewhere. Luckily the boat is already covered until July so it’s not a problem.

A number of locks later and I’m starting to get the hang of them, I got a bit of a ticking off from a British Waterways lock-man after the first few, as I left the last lock gate open because we thought we saw another boat was on its way! 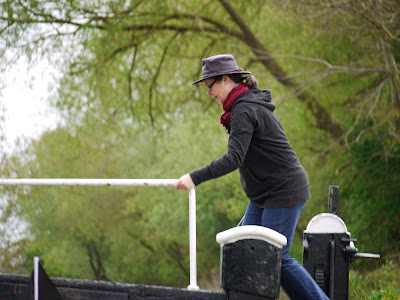 The original plan of Barry doing the locks hasn’t worked out, as that would mean I’d have to steer the boat into the locks and as the first ones were only just wide enough for the boat I decided the locks may be the simpler option! Also I get more exercise this way, so I’m hoping I shall soon be a sliver of the woman I was, lol.

We lost a fender (the things that stop the boat from bouncing on the side of the canals when you moor up) in one of the locks even though we thought we’d put them all out of the way (only just bought them!) and Barry managed to get one of the central mooring ropes chopped off as he skipped off the boat at one stage to get an amazing photo of a bleak landscape and forgot to tie the rope back up after her returned to the boat! He also foolishly wore his jandals while driving initially, and almost lost one when it fell off into the lock - typical man, I’d told him the ‘towpath tips’ book said not to wear jandals (well they said flip flops actually in English speak!) but would he listen… 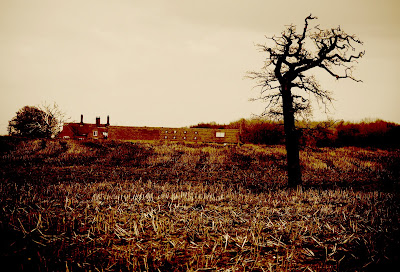 Talking of skipping off, that’s what he keeps doing on the locks too; he is giving me heart failure! Before the lock has filled up he’s jumping up on the roof of the boat and onto the side to give me a hand, he just can’t help himself! 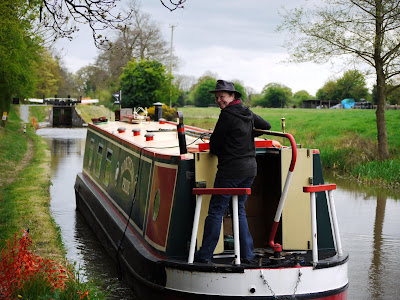 Last night we moored at a place called Wenbury along the Llangollen canal. Barry went for a sunset walk and got chatting to other boat owners and took some lovely bridge and pub photos. No drinking in the pubs though, I was feeling pretty yuck still so stayed on the boat in the ‘warm’. 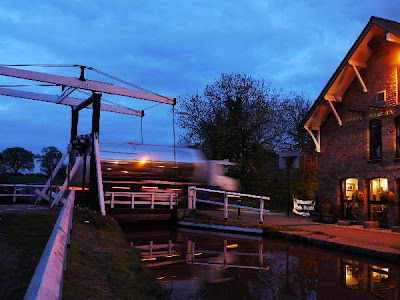 Talking of warmth, the weather is sporadically sunny, but mostly overcast and about 16 degrees, typically English really. Barry almost put his shorts on this morning, but soon came to his senses again! We got quite excited earlier by the weather forecast over the next few days being between 21 and 30 degrees until we found we’d put in Shrewsbury in America rather than Shropshire where it is going to be between 13 and 18! Ah well, you can’t have it all. 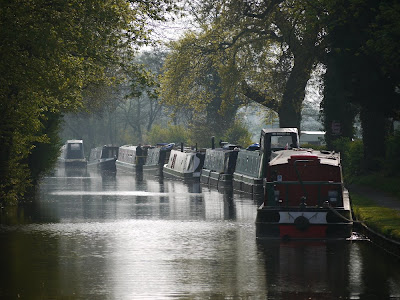 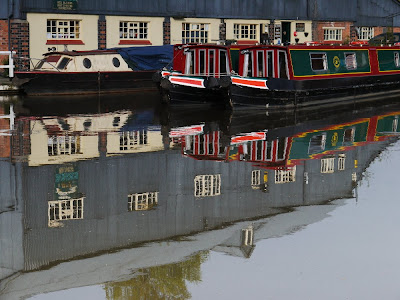 It’s been our first full day cruising today and we are now moored up at Whitchurch. It’s St George’s Day today so we were hoping for a decent English pub to have a few beers in tonight, but unfortunately the moorings are a 15 minute walk away from the town, so it’ll be beers on the boat and a couple of glasses of wine for me. I can’t recall ever celebrating St George’s Day previously so it’s fine by me. Tomorrow we’ll be heading for Ellesmere. 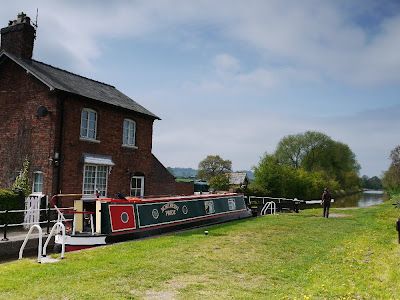 Overall we are just loving cruising along, making the dream a reality, no rush to be anywhere or do anything, bliss…