Today it was 'Second Hand Sunday' in Gisborne and we managed to give away a heap of 'stuff' that I sorted out from under the house yesterday.  The directions say to:

I set the alarm for 0730hrs and Barry and I took boxes of things up to the verge above our house, including glass shelving units, a CD player and speakers, photo frames, a raincoat, a compost bin and lots of other things - the letterbox is down the drive so no notice was put up.  I didn't think to take a photo of 'before' until too late - this was about half an hour after we'd deposited our goods ... 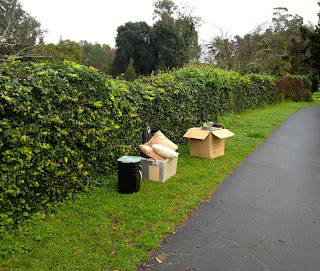 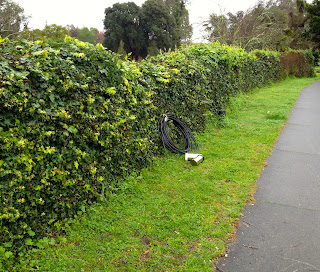 Those few items left had also disappeared by 0900hrs, which is when it was supposed to be starting!  We chose not to do any fossicker chatting, though we could hear the conversations from the other side of the hedge - it's quite amusing listening to people discussing your belongings!  This certainly bodes well for the rest of our de-cluttering - and how wonderful to be able to give away things that other people can use - or sell, we don't care!  One man's trash is another man's treasure.


We also saw some slithers of blue sky today for the first time in weeks, we've had relentless rain which is most unusual for the east coast of the New Zealand.  Barry's sister, Jenny, and I, walked to see June, Barry's mum, in the Nursing Home where she's now living bless her.  It was fabulous to get out and have some fresh air and exercise - I can't wait to be on the canals again and able to walk in nature most days and see sights like this one of our river in Gisborne ... 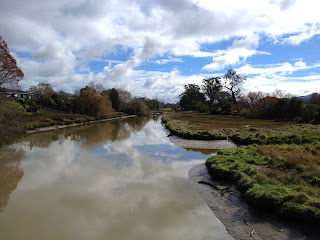 The tiles are all up in the bathroom now, and Barry has finished putting the skirting board on - almost there now!  Just the bath to paint (well, we're getting a professional in to do that!), the heated towel rail to be put in, the new windows to be inserted and the walls and ceiling to be painted!  Hopefully it'll all be completed by the end of August.

Barry's sent away for his new passport and as soon as we get that back I'll book our tickets to England for mid March 2013 - that will be fantastic to have a date!

In the past few weeks I've resigned from the 'Maternity Quality and Safety Project Coordinator' role - I had already planned what I wanted to be doing before we returned to UK, and that was just an extra 'hat to wear' that tipped me over the balance - it's ridiculous to be a Holistic Life Coach and have no 'life'!  I'm finishing a few things as part of the project, and will support the next person, but my priority is my Life Coaching Diploma (for which I have three more assignments to complete by September ...), and getting our house ready to put on the market by the end of September - oh and of course my holiday in Samoa, two weeks working back at Te Puia at the end of October, and showing two of my three sisters the beautiful country of New Zealand when they come for three weeks in the middle of November!